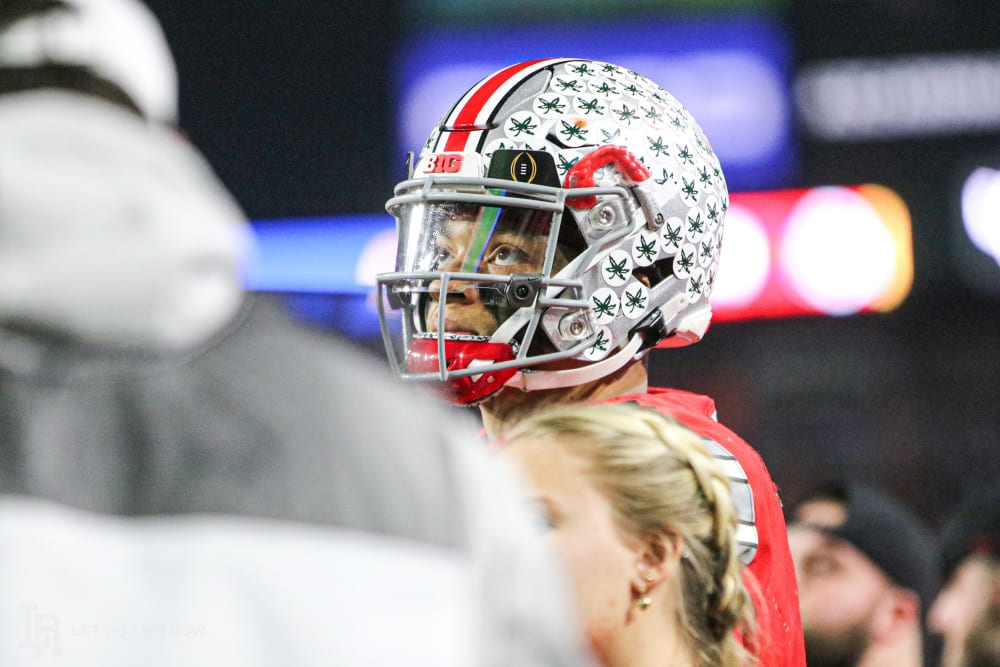 Ohio State quarterback Justin Fields will be a huge part of the national title push next season. (Birm/Lettermen Row)

Ohio State came up just short in the College Football Playoff semifinal at the Fiesta Bowl a couple weeks ago. After beating the Buckeyes, Clemson lost in the national title game.

But those two programs aren’t going away from the national title picture. Both are early favorites to win next season’s national title. Maybe it’s a bit premature to peek at next season, but shortly after LSU was crowned this season’s champion, the odds for next season began to pop up at various sports books.

The Buckeyes return three starters along the offensive line and a bevy of weapons to help quarterback Justin Fields, a Heisman frontrunner for next season. The defense will reload after losing three members of the secondary and key pieces in the front seven. But the oddsmakers in the desert are still picking Ohio State to roll over the Big Ten for the fourth straight year and compete for a national title.

Lathan Ransom had an interesting final couple weeks of his recruitment.

The highly-regarded four-star safety from Arizona was committed to Ohio State, and he was committed to play for now-former defensive coordinator Jeff Hafley. When Hafley left Ohio State to become the head coach at Boston College, Ransom had some tough decisions to make.

While in Arizona for the Fiesta Bowl, Lettermen Row senior writer Austin Ward caught up with Ransom to find out why he stuck with the Buckeyes and what the message from the coaching staff was in the aftermath of Hafley’s departure. Here is part of the conversation:

So, Ransom needed to have a couple more honest, difficult conversations to make sure he was still certain of his decision. And in the end, his choice was focused more on the overall program in place at Ohio State, the chance to compete for championships and the head coach running the show. The timing may have been a surprise, but the exit was somewhat inevitable anyway since there was never an expectation that Hafley would be around for Ransom’s whole career with the Buckeyes.

Of course, Ransom was excited to play for Hafley after that wildly successful year he spent working with the secondary, helping rapidly transform the worst statistical defense in school history into one of the most fearsome in the nation. The loss of Hafley was a big deal for the Buckeyes, and it certainly didn’t go unnoticed on the recruiting trail with Clark Phillips flipping to Utah and Cameron Martinez electing to wait until a replacement was hired before making his final decision in February.

To see the full story about why Ransom chose to stick with his pledge to the Buckeyes, click here.

For the first time since before Christmas, Ohio State walked off the court with a win.

The burden of a four-game losing streak has been lifted from Chris Holtmann’s team, and now, the Buckeyes can finally smile Tuesday night after a rough stretch that spanned nearly a month.

The offense looked competent again. Kyle Young looked like he’s back and healthy for a huge upcoming string of Big Ten games. The guard duo that Ohio State (12-5, 2-4 Big Ten) relies on took the game over. And the Buckeyes are back in the win column with an 80-68 win over Nebraska.

Lettermen Row was on site in the Schottenstein Center for coverage of the game. To see Three Points from the win, click here.