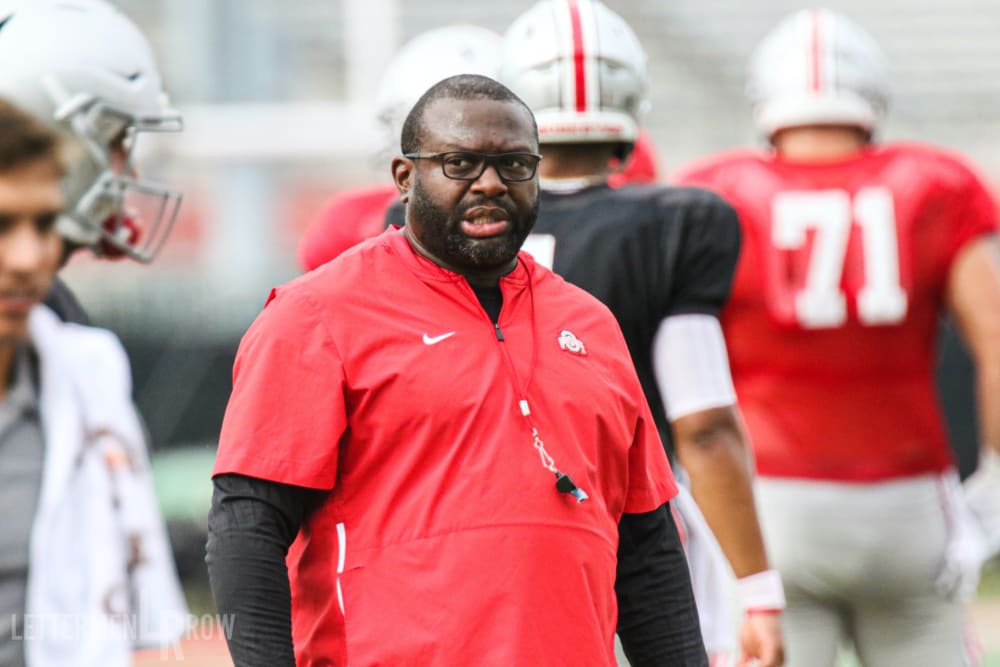 Tony Alford and the Buckeyes may need Miyan Williams to play early in his career. (Birm/Lettermen Row)

Miyan Williams understands the depth issues at running back for Ohio State right now. When he shows up to become a member of the football program in June, he’s hoping he can be one of the answers for the Buckeyes at one of their most important positions. Mike Weber and J.K. Dobbins both earned playing time early in their Ohio State career. And just because Williams was a 3-star recruit doesn’t mean that he can’t contribute immediately, too. He’s got his eyes set on having an impact.

Our own recruiting expert Birm caught up with Williams to find out how his training has been in preparation for his arrival on campus at Ohio State. Part of it is here:

Relaxed and focused after signing with Ohio State in December, Williams is fine with the comparison to Mike Weber. He sees the similarities.

What he’s less fine with is the notion the was a backup plan for the Buckeyes, whether that’s because of his 3-star ranking or some other reason. He knows his national ranking doesn’t matter anymore, but there’s no doubt that he’s got an aim to prove doubters wrong when he steps on the field for the first time at Ohio State.

“There is a chip on my shoulder,” Williams told Lettermen Row.”That just makes me grind harder than ever. I really don’t care about the rankings because they don’t help you get better at what you are doing, so the rankings didn’t matter to me.”

Cade Stover was content with any position on the field for Ohio State.

After a year in which he played both linebacker and defensive end, Stover has made the full-time switch to tight end, where he can showcase his ability with the ball in his hands, something he did in high school. The Buckeyes are finding new and creative ways to get the tight ends on the field, and Stover can provide a versatile body for Kevin Wilson and Ryan Day to work with. They think he can thrive on the offensive side of the ball, and Stover was fine with making the transition.

What makes Cade Stover a good fit for Ohio State on offense? How will his skills translate to tight end for the Buckeyes after spending his first season with the program on defense? Is this the right spot for him permanently moving forward? Former Ohio State captain and two-way standout Zach Boren was back in the Lettermen Row film lab looking at some clips of Stover and trying to answer those questions in the latest episode of BuckIQ.

A little more than four months after tipping off against Cincinnati to open the regular season, No. 19 Ohio State will finalize its campaign Sunday afternoon in the Breslin Center.

The Buckeyes, winners of four straight and nine of their last 11, will hit the road for a huge road matchup against Michigan State, a game with plenty of Big Ten Tournament seeding implications. After a strong start to the season, the Buckeyes faltered through January and began conference play with a 2-6 record. Since then, they’re 9-2 and have won three of their last four games over ranked opponents. The latest win, an eight-point victory over No. 23 Illinois, was huge for the Buckeyes.

Now before they head to Indianapolis for the Big Ten Tournament, they’ll have to find a way to win another tough road game in the country’s hardest conference. It won’t be easy, but Chris Holtmann’s team is playing well enough to get a win, which would catapult them into the conference tournament riding a wave of confidence.

Tipoff inside the Breslin Center is slated for 4:30 p.m. and can be found on CBS.