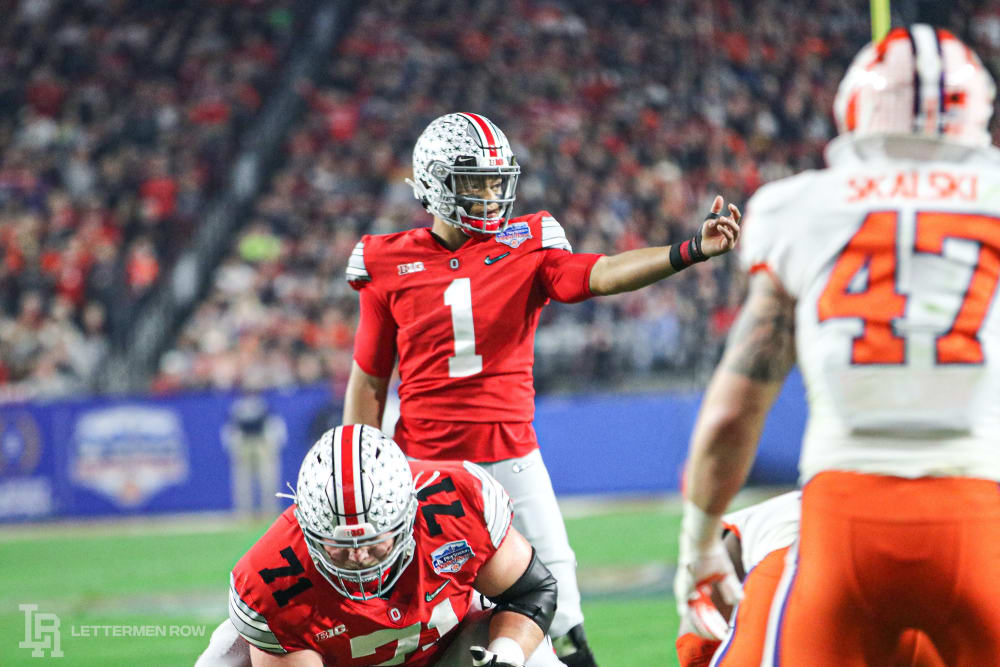 All he has done since then is continue to skyrocket to nearly the top of the board. Fields now has some of the best odds to be the No. 1 pick in the NFL Draft next spring. He currently has the second-best odds to be that selection, behind only Clemson quarterback Trevor Lawrence. Fields has been battling Lawrence since both were in high school. It continued last year at the Fiesta Bowl, and they’ll likely be compared to each other all season next year.

Last week, Lettermen Row senior writer Austin Ward wrote about Fields, the NFL, and how he and Ryan Day plan on handling that buzz. Part of that is here:

The buzz for Fields is already growing ahead of what will almost certainly be his last season with the Buckeyes before turning pro, and certainly there’s the possibility for that bright spotlight to get tiring. But at this point Day and Fields aren’t treating it as any different than the pressure that comes with being the starter at Ohio State, playing for championships or becoming a Heisman Trophy finalist — so they don’t plan on any changes to deal with it.

K’Vaughan Pope showed off his quick reaction time and flashed his hands last season in back-to-back games against Maryland and Rutgers. The linebacker was able to snag an interception in each of those games.

Pope admitted the speed of the game was impacting him early in the season last year, but after appearing in 13 games for the Buckeyes, he became a reliable defensive reserve and special teams contributor. And while that experience might not look like much on paper and the flashes have mostly come in blowouts, the coaching staff has consistently pointed to it as meaningful for guys like Pope who have been behind veteran starters for the last couple years. Thanks to all the lopsided victories, there have been more reps to go around for the next wave of Buckeyes, and Pope is on the short list of guys who have made the most of their chances.

What makes K’Vaughan Pope such an intriguing player for Ohio State? How can the linebacker make a jump into the rotation after primarily coming off the bench so far in his career? Where does he fit best in the lineup for the Buckeyes? Former Ohio State linebacker Zach Boren checked out some clips and answered those questions in the latest episode of BuckIQ.

The Tim May Podcast is back to talk about the latest Ohio State news.

This week, Tim and Lettermen Row senior writer Austin Ward break down what a football season could look like this fall and how the NCAA, conferences and schools could do it in a safe manner that still allows everyone to play. It won’t be normal, but there could be football in the fall.

The guys also talked about the recruiting roll the Buckeyes have been on over the last couple of months despite the shutdown and quarantine, and just how Ryan Day has kept the Ohio State recruiting machine going.

Tucked into all of that is a condensed version of Tim’s interview with former Ohio State defensive tackle Robert Landers, who is still hoping to land with an NFL team.

The show can be found on all podcast-listening platforms.