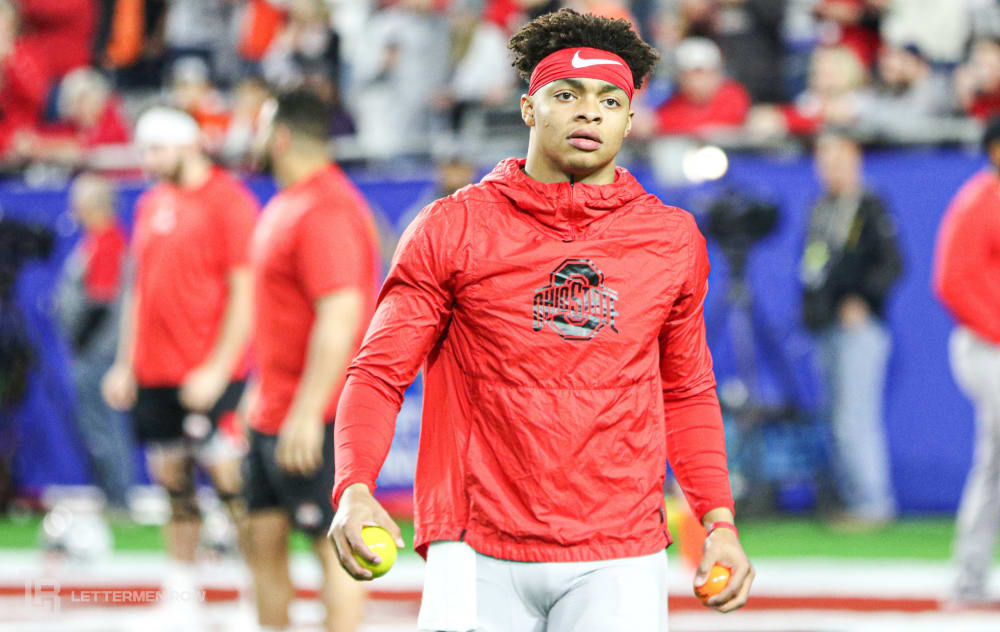 Justin Fields will be a second-year starter next season. (Birm/Lettermen Row)

Justin Fields turned out to be a superstar for the Buckeyes.

After a shaky spring game and a quarterback battle into training camp, it was uncertain how Fields would handle being a first-year starter. He handled it well, throwing only three interceptions all season and earning an invite to the Heisman Trophy ceremony.

Now, Fields will enter his second year as the signal caller for the Buckeyes, giving coach Ryan Day and quarterbacks coach Corey Dennis a second year to work with Fields and make the offense even more explosive. That process starts now.

“There’s a lot of things that we can really work on,” Day said. “He’s made a lot of great strides. But there’s certain things in his game that we can really take to the next level. It’s great conversation, and I know he’s excited to hear what’s going on.”

Those conversations started this week, and they’ll continue until spring practice starts. Then, the time will come to put those things into action.

Corey Dennis is unproven as a recruiter of quarterbacks. At least, that’s what he appears to be from the outside.

But a closer peek into the program reveals the impact Dennis had in helping land Jack Miller and C.J. Stroud in 2020 and Kyle McCord in 2021. Dennis has a unique personality. He’s young and ready to get to work. And he might be a key promotion in Ryan Day’s second season as head coach. Lettermen Row recruiting expert Birm broke down what kind of recruiter Dennis is and how much he can help the Buckeyes efforts at quarterback:

On the first day of the final contact period for the 2020 recruiting cycle, Dennis went to see his 2021 commitment to continue building their relationship. Both of the Buckeyes 2020 quarterback signees, C.J. Stroud and Jack Miller, have been on campus in Columbus for ten days already, so McCord was the obvious choice for travel. It also makes sense that Dennis is excited for his first recruiting trip as a full-time coach after five years of working inside the Woody Hayes Athletic Center as an intern, graduate assistant and then as a senior quality control coach.

Youthful enthusiasm and a half-decade of teeth-grinding are two of the reasons why Ryan Day felt comfortable turning over the quarterback room in Columbus to Dennis, who worked directly under Day’s tutelage in 2017 and 2018. No one in the country could be more aware of the potential Dennis has than Day, and that knowledge has given the second-year Ohio State coach confidence in his now first-year position coach.

But once the Buckeyes found out what kind of person Scott is, they had to have him in Columbus. All the stories coming out of Washington said he was generous in his community, as well as the fact that he’s a gifted football player. Scott can have a huge impact at Ohio State with the other three wide receivers that he came in with, but he can also leave his mark on the Ohio State community. He’s a special kid.

What makes Gee Scott such a big-time addition for Ohio State? How quickly can the wide receiver become a factor for the Buckeyes at a position of need? Who does Scott compare to on the field? Former Ohio State captain Evan Spencer was back in the Lettermen Row film lab looking at the highlight reel and trying to answer those questions in the latest episode of BuckIQ.