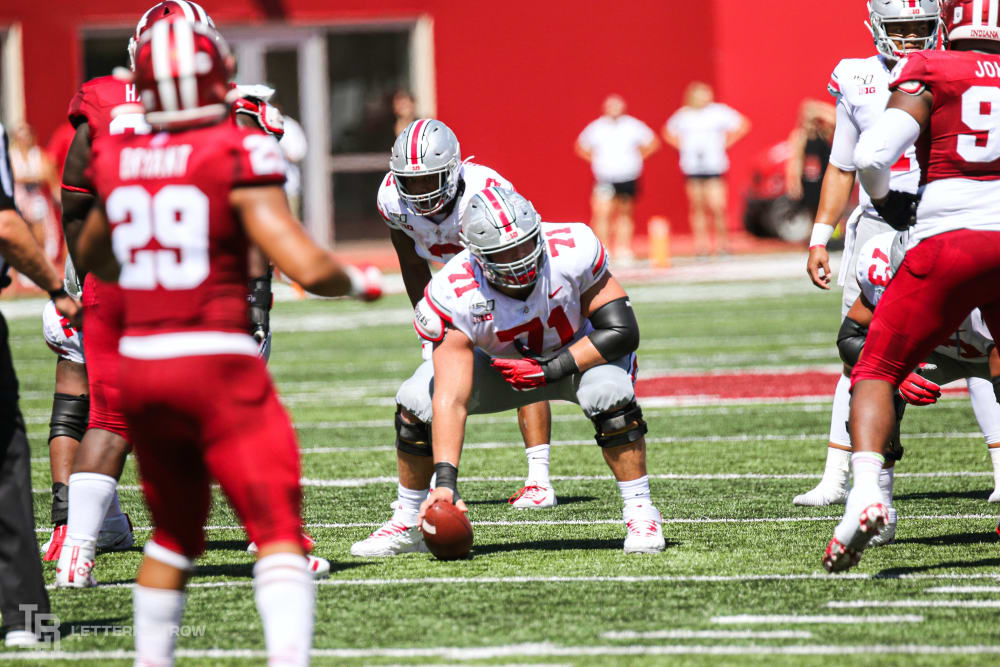 Ohio State center Josh Myers and the Buckeyes are taking advantage of having a common opponent. (Birm/Lettermen Row)

When Ohio State plays Miami (Ohio) on Saturday, the Buckeyes will face a RedHawks team that is fresh off a loss to Cincinnati.

Yes, the same Cincinnati team that got throttled by Ohio State beat Miami. But transitive wins don’t matter, and the Buckeyes still have to beat Miami on the field.

What might help the Buckeyes — and help the RedHawks — is studying film from their game against Cincinnati and knowing how they stacked up with the Bearcats, then checking out Miami against Cincinnati. Both teams can find what worked in those games and base certain things around what they see.

“Any time you play a common opponent, it’s easier to compare and see what’s going on,” center Josh Myers said. “You learn a lot from it.”

Ohio State might not need help against Miami, but they have it, anyways. Or maybe it will be the RedHawks who benefit from the Ohio State film against Cincinnati.

Huge plays are becoming a trend for Pete Werner now through three games, with the junior contributing something in each of them that is catching the eye of the Buckeyes and offering a reminder of why he’s become so important in the turnaround of the Silver Bullets.

What is fueling the improvement for Werner? Where can he still enhance his impact for the Buckeyes? Can Ohio State get even stingier on defense this season? Former Ohio State linebacker Zach Boren popped in the film to break it all down for Lettermen Row. To view the latest BuckIQ, click here.

On the field, the Buckeyes may not be playing the most glorified game Saturday at Ohio Stadium when they take on Miami (Ohio).

But it’s expected to be a big weekend for Ohio State recruiting efforts, especially the one geared toward flipping 4-star cornerback Ryan Watts from Oklahoma, who is expected to be at the game Saturday for an official visit.

Watts is a much more realistic option to wrap up the defensive back recruiting in the Class of 2020 for the Buckeyes than a guy like Elias Ricks. And the fact that the Oklahoma commitment is intent on making this visit — during his own off week, meaning it was done almost as soon as possible — shouldn’t be dismissed as just coincidence.

There’s a real interest here from both sides. If the visit does happen, don’t be entirely surprised if things quickly turn in the Buckeyes direction in this recruitment. Watts took his official visit to Oklahoma back in April. Ohio State, Penn State, Texas A&M and a host of other big-time programs are still trying to flip the 6-foot-2, 190-pound cornerback away from the Sooners.

Miss any Ohio State recruiting news? Check out the latest Dotting The ‘Eyes.

New Beanie and The Boom Podcast

This week on The Beanie and the Boom Podcast, the guys welcomed Pepper and Dionte’ Johnson. The Johnson’s are one of only three father-son duos to captain the Ohio State football team. Pepper went on to play in the NFL for 13 seasons, winning two Super Bowls with the New York Giants as a player and three as a coach with the New England Patriots.

You don’t want to miss the many great stories this group has. To listen, click here.

Find the Beanie and The Boom Podcast on your favorite podcast-listening platform: