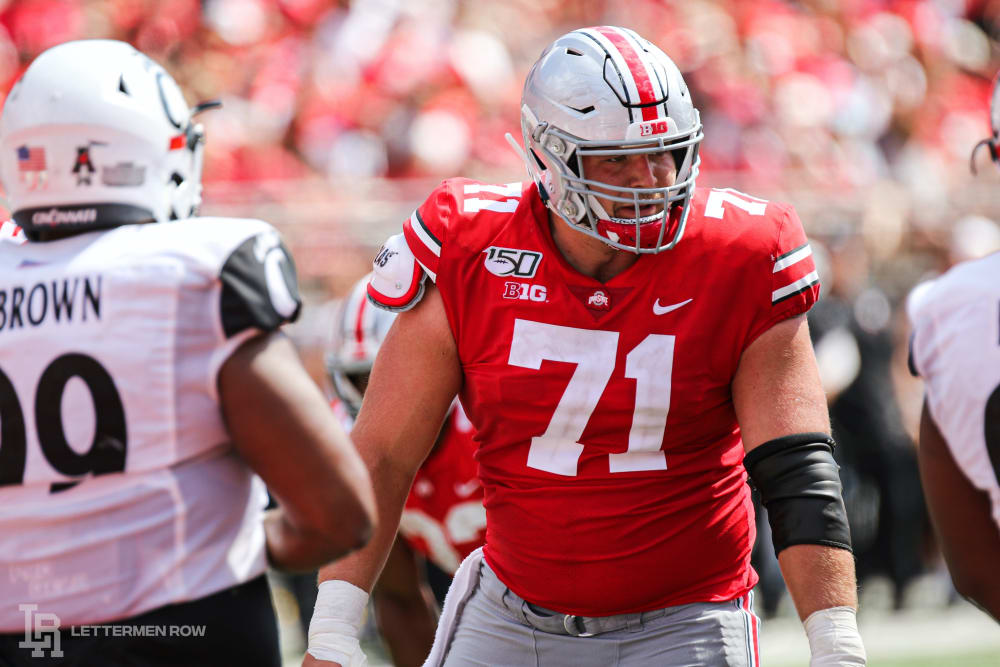 Ohio State center Josh Myers has been a wrecking ball on the offensive line. (Birm/Lettermen Row)

Josh Myers playing at an elite level for Ohio State

Ohio State offensive coordinator Kevin Wilson was asked Tuesday about how the depth at offensive line was panning out, and he was asked about backup center Harry Miller in particular.

But before he could talk about the true freshman Miller, he had to bring up his starting center and praise him.

The moment was the humorous part of Wilson’s press conference, but the point remains. Myers has been a revelation for the Ohio State offensive line. He has been mauling interior defensive linemen through six games, and he doesn’t appear to be slowing down.

Myers’ presence on the offensive line is part of an attitude the guys up front have established through the first half of the season.

“You get what you emphasize,” Wilson said. “We have emphasized that we want to be a team that continues to play the game with a little bit of a physical presence and toughness.”

With Josh Myers leading the charge, the Buckeyes are playing well up front.

Speaking of Myers, the offensive line as a collective unit has been a key cog for the Buckeyes success this season.

Ohio State rushed for over 300 yards on the Michigan State front, one of the best run-stopping units in the country. The offensive line is largely responsible for opening running lanes for J.K. Dobbins, Master Teague and Justin Fields.

What has fueled the improvements for the Buckeyes up front? Where can the blocking still get better coming out of the off date? How significant was that performance for Ohio State in the win over Michigan State? Former Ohio State offensive tackle Reid Fragel put on the tape and addressed those topics in the latest episode of BuckIQ.

Handing out midseason awards for Buckeyes

The Buckeyes are at the halfway point in the season with a 6-0 record and not much to complain about. Quarterback Justin Fields has been electric, and the defense is one of the best units in the country. So Lettermen Row decided to hand out some awards for the Buckeyes, ranging from Best Win to Best Quote from the first half of the campaign.

Want an easier way to get free, premium content from Lettermen Row?
The Lettermen Row app is here! Get all of the Ohio State news, analysis, videos and everything else you’ve come to expect from us in one free, convenient spot. It’s now available in both the App Store and Google Play — check it out!
The Lettermen Row app can be found for free here: