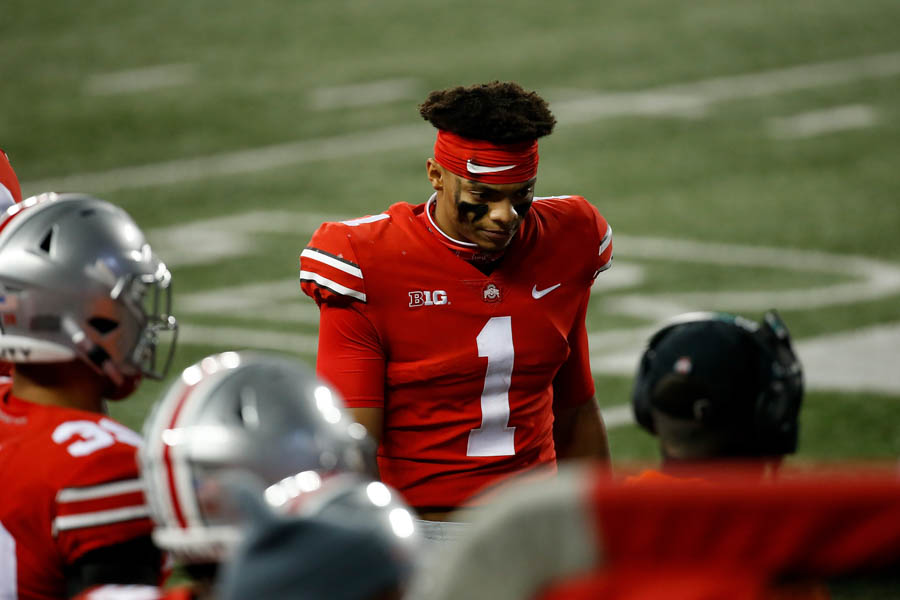 Heisman odds drop for Justin Fields during off date

But if the Ohio State signal-caller continues his early-season pace, he should be right there at the end to be in contention with Trask for the award.

Nicholas Petit-Frere is finally at the right playing weight to be a superstar at tackle for the Buckeyes.

Petit-Frere and Thayer Munford have combined to allow just one quarterback pressure and no sacks through three games. And Petit-Frere is already living up to his five-star pedigree he boasted out of high school.

What is fueling the rise of Nicholas Petit-Frere for Ohio State? How impressive has the pass protection been for the Buckeyes as the aerial attack explodes? What can the former five-star recruit still improve as his junior season progresses? Former Ohio State right tackle Reid Fragel was back in the Lettermen Row film lab with senior writer Austin Ward to break down Petit-Frere and answer those questions in the latest episode of BuckIQ.

Ohio State didn’t have an opportunity to prove its dominance over the rest of the Big Ten because of a canceled game, but the Buckeyes have a huge matchup this week. The Tim May Podcast is here to analyze every angle of the Buckeyes and Hoosiers.

Tim welcomes Lettermen Row senior writer Austin Ward on the show to talk about the top-10 matchup that will take place this week, along with what the Buckeyes need to do to beat Indiana.

Tim also welcomes on three-time national title-winning coach Urban Meyer to break down the national college football picture and the Big Ten race as it begins to heat up. Meyer and May also talk about what is going wrong at both Michigan and Penn State.

Former Ohio State standout Matt Finkes also joined the show to break down every angle of the Buckeyes through three games and talk about the upcoming game with Indiana.