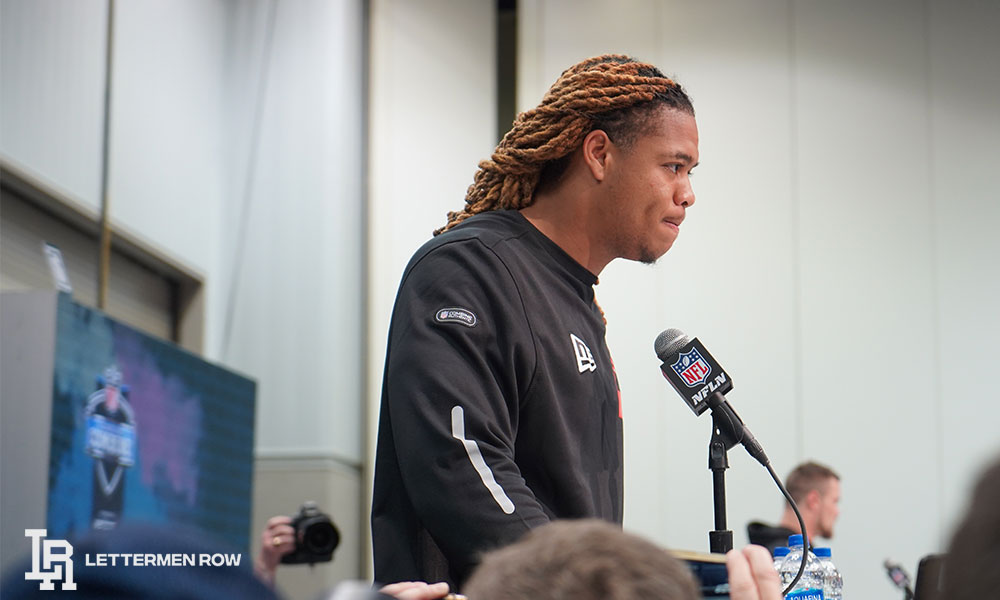 Chase Young is the favorite to win NFL Defensive Rookie of the Year. (Spencer Holbrook/Lettermen Row)

Chase Young did nearly everything he could have possibly accomplished at Ohio State. The defensive superstar was even invited to the Heisman Trophy presentation in December.

But now, he’s off to the NFL. The No. 2 overall pick to the Washington Redskins, Young is now favored to win the NFL Defensive Rookie of the Year Award by the folks at BetOnline.ag. If he wins, he would become the fourth former Ohio State player in the last five years to win the award. Joey Bosa, Marshon Lattimore and Nick Bosa all won the honor during their rookie seasons.

On the offensive side of the ball, former Ohio State running back J.K. Dobbins was drafted into the Baltimore Ravens run-heavy offense, and his odds to win the award are 16/1. K.J. Hill, who slipped all the way into the seventh round before being drafted by the Los Angeles Chargers, has 40/1 odds to win that award.

After a busy weekend full of NFL Draft selections from Ohio State, Lettermen Live presented by Roosters is back to break it all down.

Host Austin Ward is joined by Lettermen Row Director of Recruiting Jeremy Birmingham, along with former Buckeyes greats Zach Boren and Beanie Wells. The guys break down every angle of the draft for Ohio State, including how the Buckeyes have had so much success in the draft, who the biggest snubs were and more.

The conversation also included a look at the talent gap between Ohio State and its biggest rival, Michigan. Both schools had 10 selections in the draft, but many of Michigan’s came in late rounds.

Another jam-packed, fun, casual conversation of Lettermen Live presented by Roosters is here.

What happened between Jantzen Dunn and Oklahoma no longer matters. Dunn is now a Buckeyes commit in the class of 2021.

The 6-foot-2, 180-pound defensive back prospect from Bowling Green (Ky.) South Warren High School could tell he wanted to be at Ohio State since he visited in November for a game. So, it wasn’t a surprise when the rising senior decided to join the No. 1 class in the country at Ohio State.

What was it about Ohio State that made the difference? What impact did Kerry Coombs have, who worked alongside assistant secondary coach Matt Barnes to recruit the No. 3-ranked player in Kentucky? Why did he commit now amidst the uncertainty of the coronavirus pandemic?

Dunn talked about his commitment to the Buckeyes in the next installment of Birminology:

Jantzen Dunn on his commitment to Ohio State, why Buckeyes were right fit for him
Watch this video on YouTube.