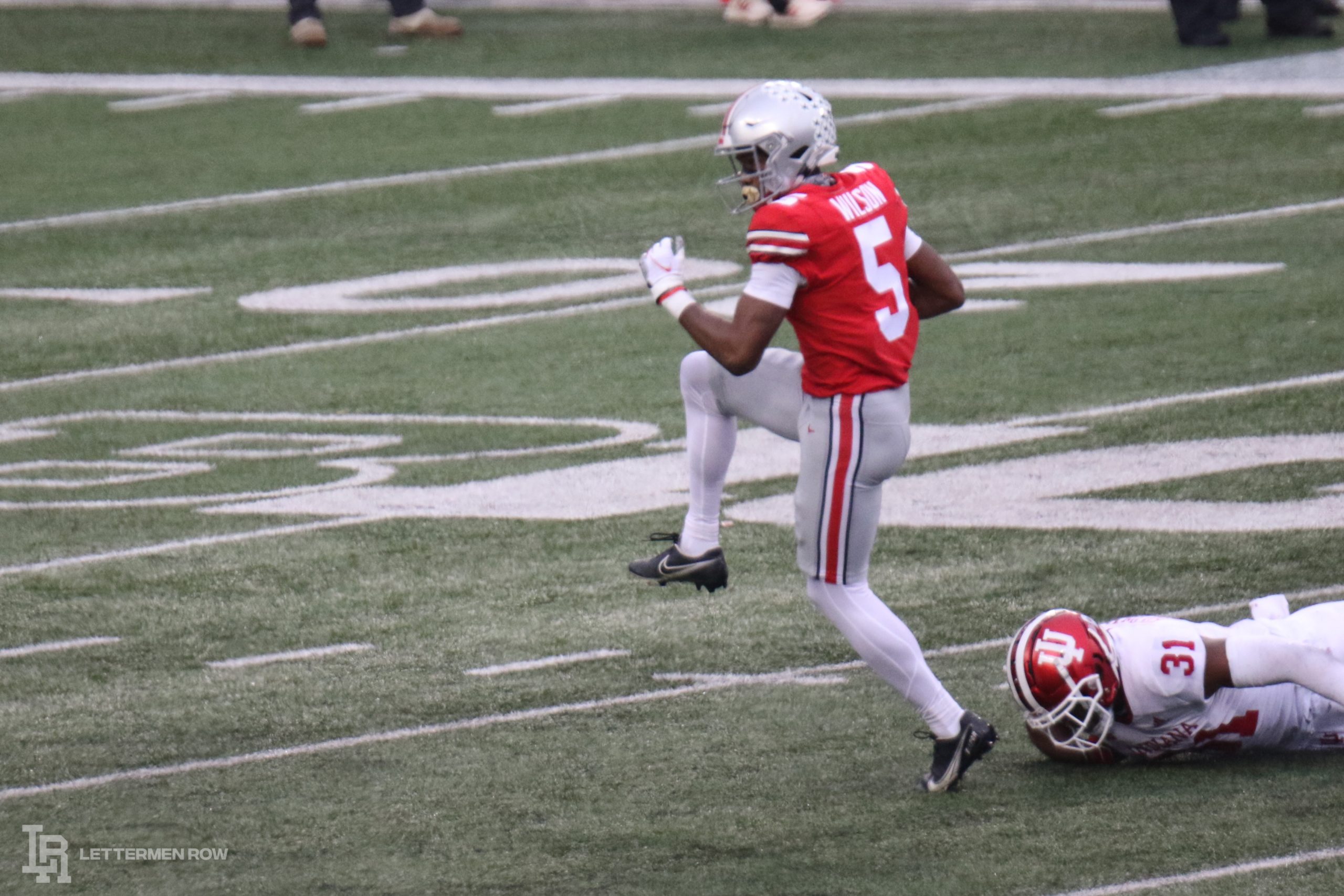 Garrett Wilson was one of the Ohio State offensive players of the game against Indiana. (Birm/Lettermen Row)

Ohio State jumped out to a huge lead against then-No. 9 Indiana on Saturday and survived a late comeback effort for a huge win to gain control of the Big Ten East Division. The Buckeyes used a dominant run game and late-game defensive stops to take down the Hoosiers.

Before the Buckeyes can focus their attention on the upcoming road trip to Illinois, they made sure to hand out the champion grades from the win over Indiana. Those who graded as champions can be found below:

Offered by the Buckeyes in March, Caleb Burton, the country’s No. 2-ranked receiver according to the 247Sports.com composite rankings gave a pretty solid hint about what his future held in his first conversation with Lettermen Row.

Now, he’s officially the ninth player committed to the Buckeyes in the class of 2022.

Why did Caleb Burton make the Buckeyes his pick? What made this top-10 prospect want to commit to Ohio State without ever visiting the campus? How did Garrett Willson moving to the slot, and his early-season success, impact the timing of his decision? What role will he take in recruiting other Texas standouts to join the Buckeyes with him and Quinn Ewers?

Get to know Caleb Burton a bit better and find out the answers to those questions and more in this special commitment episode of Birminology from Lettermen Row Director of Recruiting Jeremy Birmingham.

Ohio State has plenty of questions to answer after its top-10 win over Indiana, and Lettermen Live hosted by Roosters is back for yet another show to break down every Buckeyes angle.

Lettermen Row senior writer Austin Ward is joined by former Ohio State players Justin Zwick, Doug Worthington, Michael Bennett and Anthony Schlegel for a discussion about the Buckeyes rocky shootout win over Indiana. The guys break down everything from the offensive power the Buckeyes have, the problems in the defensive backfield and how the Ohio State coaching staff can get things fixed on defense. They also made sure to preview the upcoming trip to Illinois and give a game pick.

Nicole Cox from Roosters also joined the show to give an update about how to safely watch the Buckeyes while enjoying Roosters this fall and give a game pick of her own for Saturday’s game against Illinois.

Lettermen Row Weekend Kickoff presented by Bryant Heating & Cooling Systems: The Whatever It Takes Pregame Show will be back at Urban Meyer’s Pint House this Tuesday — due to the holiday on Thursday — to preview the weekend full of college football games, including the Buckeyes upcoming road game against Illinois.

The next edition of the show will be Tuesday, Nov. 24 at 7 p.m., and there will be plenty of Ohio State guests on hand to break down the latest developments and preview the weekend of football ahead. Come out to see Bobby Carpenter, Zach Boren, Anthony Schlegel and other former Buckeyes greats give their insight about the upcoming games and how they think the Buckeyes will fare against Illinois.

Get set with the panel of former Buckeyes with analysis, stories, delicious food from Urban Meyer’s Pint House in Dublin and some cold Coors Light. Don’t miss the next show this Tuesday at 7 p.m.