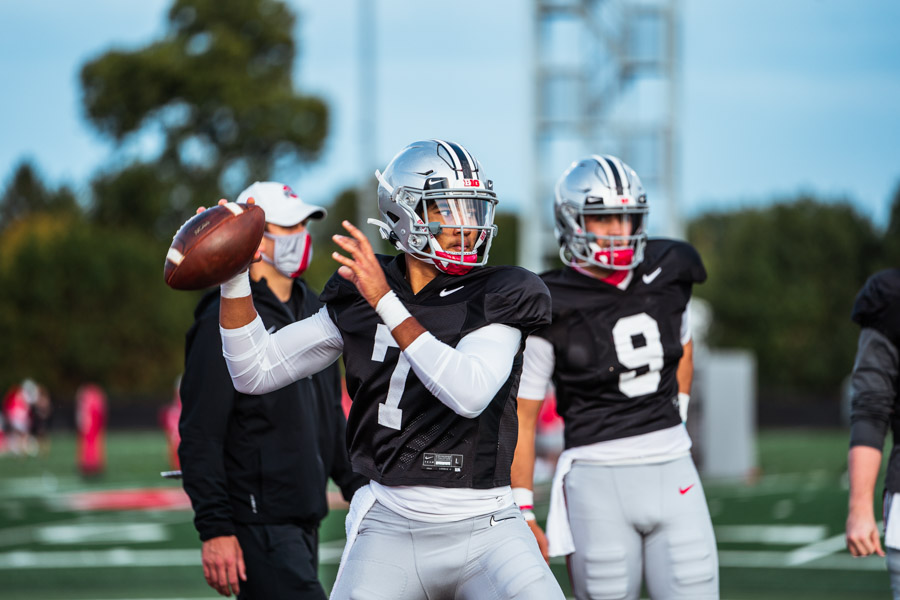 No edge for C.J. Stroud, Jack Miller with both stripes off

The black stripes are off for C.J. Stroud and Jack Miller, making the two Ohio State quarterbacks from the 2020 recruiting class officially part of the football program.

Both signal-callers lost their black stripe Wednesday after practice. And since both of them lost the stripe on the same day and nearly at the same time, not much can be drawn from that. And the Buckeyes are certainly not going to tip their hand on who has the edge to be Justin Fields’ backup this Saturday when they open against Nebraska. Both Stroud and Miller will continue to compete to take that job and build toward a starting job whenever Fields decides to leave.

“Every single day they come in, they work hard, they grind,” quarterbacks coach Corey Dennis said last week. “Not only the two freshman but Gunnar Hoak, he’s been around a while. He’s seen a lot of football. He knows our offense in and out. But everybody’s preparing and everybody’s going to be ready to go if their number is called.”

Neither Stroud or Miller has the upper hand right now, and it’s likely that neither will until they play in game action this season. For now, they’re officially part of the program after losing their black stripe.

Buckeyes players meet with media in prep for Nebraska

Ohio State co-defensive coordinator Greg Mattison and four veteran Buckeyes players held a Zoom press conference Wednesday afternoon to break down the final preparations for the long-awaited season-opener against Nebraska. Topics covered include the strength of the defense, the offensive line depth, Thayer Munford’s progress and more. Don’t miss the latest press conference with the Buckeyes.

After the press conference, Lettermen Row senior writer Austin Ward was joined by Jeremy Birmingham and Spencer Holbrook to break down everything they learned from the two-hour press conference, including Thayer Munford’s health and how important he is to the offensive line moving foward. It’s the Practice Report presented by Byers Auto!

Tristan Leigh set for trip to Columbus for Buckeyes Bash

Ohio State’s 2021 commits can’t take visits to Ohio State right now due to NCAA restrictions. But they can visit Jack Sawyer’s house, which is right outside the city in Pickerington. So that’s just what they will do this weekend. Plenty of the Buckeyes commits are flying and driving to Columbus for the “Buckeyes Bash.”

But there’s also a five-star target coming into town to hang out with the commitments. And the Buckeyes are hoping this weekend can turn the tides in the recruitment of Tristan Leigh. Lettermen Row recruiting expert Birm has more:

The reality is that Tristan Leigh has remained interested in Ohio State. This weekend’s visit, even without the chance to talk with coaches or visit the program’s incredible facilities, has the potential to really turn the tide in the Buckeyes direction. There’s a built-in advantage for the Buckeyes because of his proximity to home. And the area that Ohio State has trailed in — relationships with recruits and their families — is now on the clock. There’s a big-time opportunity for the Buckeyes to make a move. Maybe, just maybe, they can surpass LSU and Oklahoma for his eventual commitment and signing.