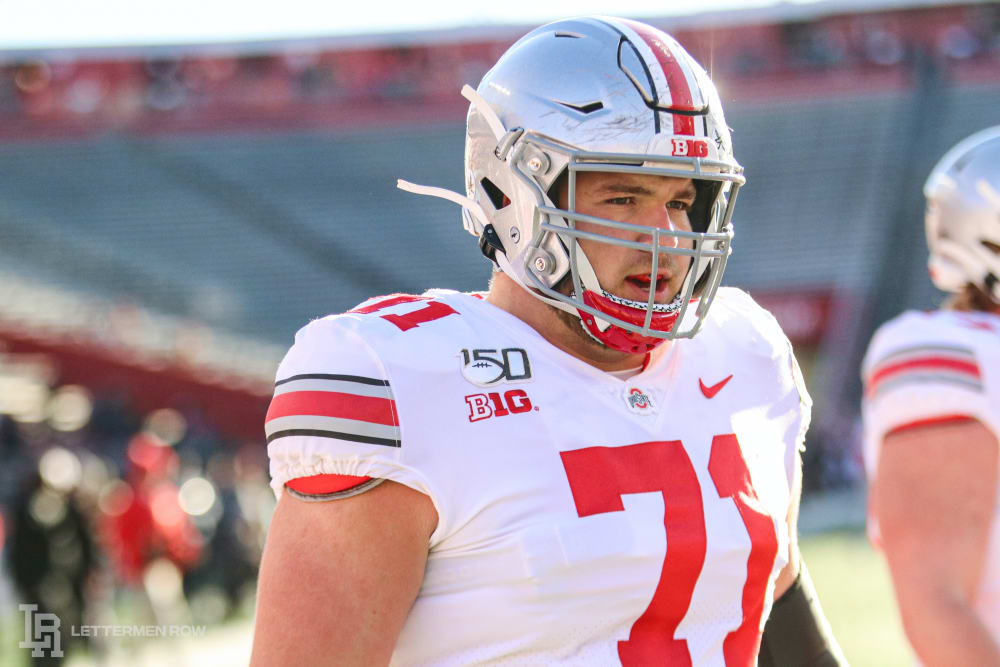 Josh Myers will return for another year at Ohio State. (Birm/Lettermen Row)

While the Buckeyes are still preparing for Clemson and the Fiesta Bowl, they received a batch of great news when both guard Wyatt Davis and center Josh Myers told Lettermen Row about their intentions to return to Ohio State after this season instead of entering the NFL Draft.

All three are certainly talented enough to play in the NFL, but another year at Ohio State will help them improve for another season as they will protect Justin Fields once again in 2o20.

“Yes, I did [submit draft feedback paperwork], but I want to put out there that I’m returning next year,” Davis told Lettermen Row. “I haven’t received [feedback] yet. I’m still waiting on it just to see it. But, yes sir, I’m coming back.”

Their returns should provide stability to Greg Studrawa’s offensive line heading into the offseason, one that had the potential of losing all five starters from this season’s unit — and one that was a finalist for the Joe Moore Award, given to the country’s top offensive line.

Mike Yurcich has only been on the Ohio State for one season, but his time in Columbus could be coming to an end.

From our own Austin Ward:

Multiple sources with ties to both the Buckeyes and Texas have indicated to Lettermen Row that Yurcich is leaning towards a departure after one season coaching the quarterbacks in Columbus, though he refused to address the situation directly during his media session on Thursday.

“It’s the rumor time of year,” Yurcich said. “Our focus is on beating Clemson, and that’s the most important thing right now. That’s where our focus is right now.”

He wouldn’t confirm it, but he also wouldn’t deny it. The rumblings of Yurcich leaving are only growing louder. He might be on his way to Austin after Ohio State’s season.

When healthy, Baron Browning seemingly can do it all.

The linebacker from Texas, who was a gem of the 2017 recruiting class, has shown an ability to help out in pass coverage, drop running backs in the backfield and rush the passer off the edge. Browning is quietly becoming a huge playmaker for the No. 2 Buckeyes, just in time for the matchup against Clemson in the College Football Playoff semifinal at the Fiesta Bowl.

With Clemson’s high-scoring offense and dangerous running attack, Browning will play a huge role in the defensive plans of Ohio State on Saturday night.

How can Browning help Ohio State swing the outcome against Clemson? What signs are there that the junior linebacker is back to full strength in time for the Fiesta Bowl? Where can the Buckeyes use him to find edges in the College Football Playoff? Former Ohio State linebacker Zach Boren was back in the film lab with Austin Ward at Lettermen Row breaking it down and answering those questions in the latest episode of BuckIQ.