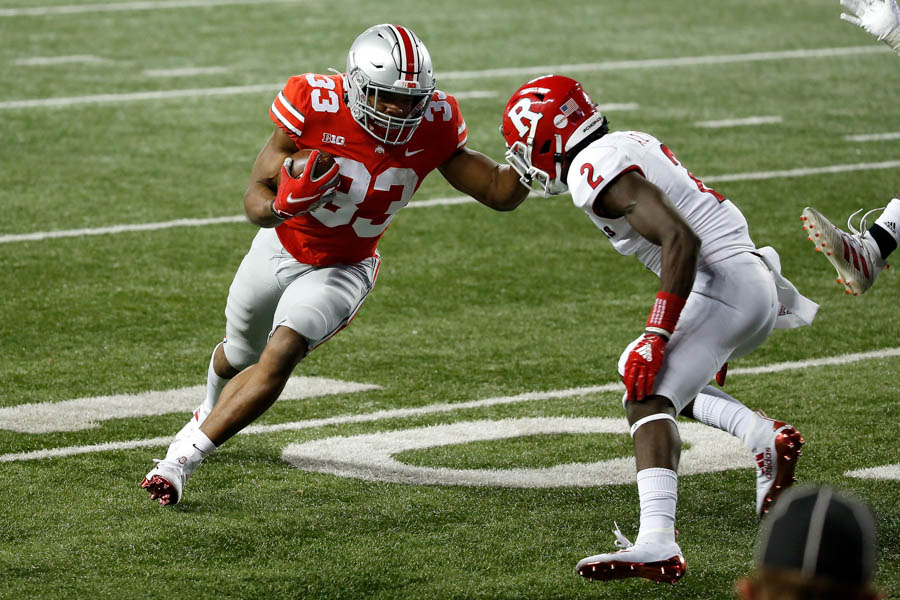 Ohio State was slated to face a decent test last week on the road at Maryland. But the Terrapins had issues on their roster with COVID-19 issues, and the game was canceled. It won’t be rescheduled.

So now, Ohio State is moving onto a 4-0 Indiana team that is off to its best start this century. The Hoosiers are hoping to come to Columbus, continue the historic start to their season and shock the college football world. The Buckeyes, meanwhile, are wanting to earn a win over a top-10 team on their way to another College Football Playoff appearance.

The drama will play out Saturday at Noon inside Ohio Stadium. And the winner will be in the driver’s seat in the Big Ten East for a chance to head to Indianapolis for the Big Ten title game.

Even after a week in which their game against Maryland was canceled due to the COVID-19 pandemic, the Buckeyes didn’t suffer in the latest polls.

Ohio State is No. 3 in the Amway Coaches Poll, which was released Sunday. Alabama, which also had a game canceled, retained the top spot. The Crimson Tide are followed by Notre Dame, Ohio State, Clemson and Florida. Ohio State received two first-place votes.

Indiana, now No. 10 in the Coaches Poll, is off to its best start in recent memory and is rated higher than it has been at any point this century, beating both Penn State and Michigan already this season. With the extra days to prepare, the Buckeyes should be ready when the Hoosiers come to Columbus for the top-10 showdown nobody was expecting.

The Buckeyes have won 24 straight games over Indiana and haven’t lost to the Hoosiers since 1988.

Indiana has beaten Michigan and Penn State. The Hoosiers are unbeaten in the Big Ten and ranked inside the top 10 for the first time this century. And the oddsmakers still don’t give them a chance against the Buckeyes.

Ohio State opened as a 21-point home favorite for Saturday’s top-10 showdown between the Buckeyes and Indiana, according to the folks at VegasInsider.com.

Ohio State is 2-1 against the spread this season, covering the 26-point spread in the opener against Nebraska and then a week later at Penn State. The Buckeyes failed to cover the spread in a sloppy win over Rutgers and didn’t play last week. Indiana, meanwhile, is 4-0 against the spread this season, winning outright as an underdog twice, beating both Penn State in the opener and Michigan on the road.

The Buckeyes are 2-7 against the spread against the Hoosiers in their last nine meetings, but they have won by at least 17 points four straight meetings.