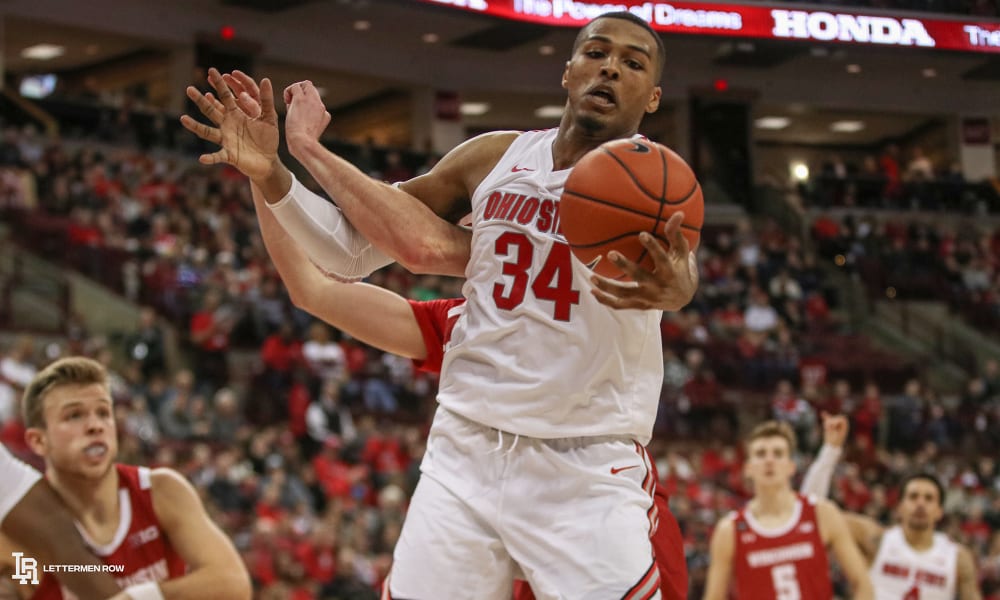 Kaleb Wesson entered his name into the NBA Draft on Wednesday. (Birm/Lettermen Row)

Kaleb Wesson will test the NBA Draft waters for the second straight offseason. Wesson made his intentions to throw his name into the NBA Draft clear Wednesday when he released a statement to his Twitter account.

Turning dreams to reality🌰💯 Thanks for your support BuckeyeNation #TN4L pic.twitter.com/aQcsxIsovG

Wesson will sign with an agent, but he will also keep his eligibility and can return to the program if he chooses. He has until June 3 to decide if he will stay in the draft or return to Ohio State.

Wesson nearly averaged a double-double for the Buckeyes last season, averaging 14 points and 9.3 rebounds per game.

This seemed like a no-brainer from the time Trey Sermon announced he was entering his name in the transfer portal.

Sermon was leaving Oklahoma and searching for a home to play his last season of college football. Ohio State had a huge hole to fill at the running back spot. The match was too perfect. Sermon and the Buckeyes made it happen.

Sermon, who has more than 2,000 career rushing yards and totaled 25 touchdowns for the Sooners, is immediately eligible, and he could make a lethal pairing with Buckeyes quarterback Justin Fields in the backfield next season.

What made Trey Sermon such a dangerous weapon during his career at Oklahoma? How does he fill the need at tailback for Ohio State? What can the Buckeyes do with him in the backfield alongside Justin Fields? Former Ohio State star Beanie Wells was back in the virtual film lab with Lettermen Row to answer those questions with Austin Ward in the latest episode of BuckIQ.

Lettermen Row’s recruiting expert Birm keeps tabs on everything in the world of Ohio State recruiting, and he has mapped out a to-do list for the Buckeyes over the next month. It includes landing more key commitments and maintaining relationships. But Birm also makes sure to note that the Buckeyes need to keep the current crop of committed talents locked in.

Because April is going to be dead on the recruiting trail and kids are pretty much forced to stay home with little to do besides talk to coaches, it’s a good time for opponents to work on loosening the Ohio State grip on its current crop of 15 verbal commitments.

For the majority of the current group, that’s not likely to be a problem. But as uncertainty around the future of college football grows and the inability to make visits persists, it is easier to convince young players and their families that maybe now isn’t the time to feel locked into a commitment.