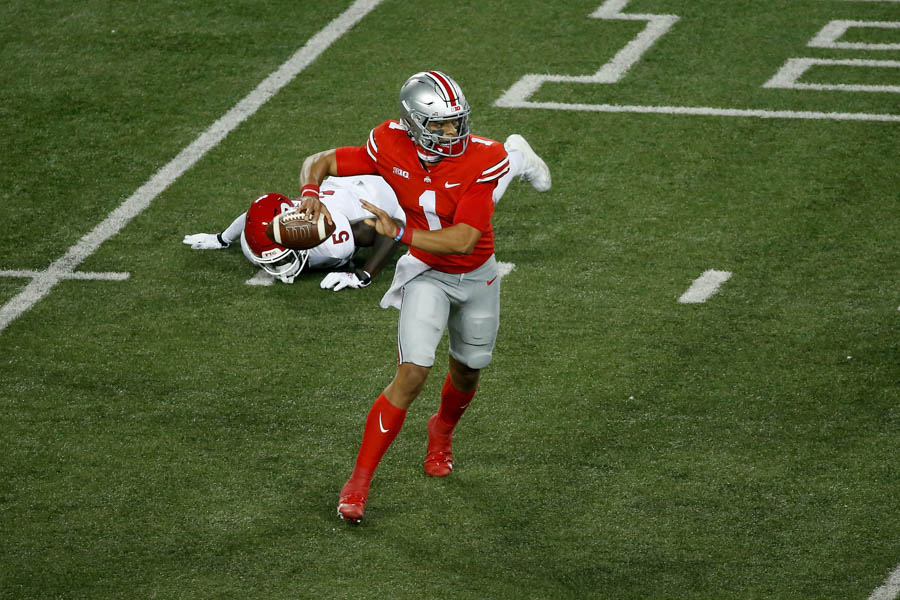 Justin Fields and the Buckeyes are facing a top-10 team. (Courtesy/Ohio State Dept. of Athletics)

Ohio State leads the all-time series 75-12-5 and has won 24-straight games versus the Hoosiers. Indiana’s last win in the series came in 1988 when it defeated the Buckeyes 41-7 in Bloomington.

Ohio State is 2-1 against the spread this season, covering the 26-point spread in the opener against Nebraska and then a week later at Penn State. The Buckeyes failed to cover the spread in a sloppy win over Rutgers and didn’t play last week. Indiana, meanwhile, is 4-0 against the spread this season, winning outright as an underdog twice, beating both Penn State in the opener and Michigan on the road.

The Buckeyes are 2-7 against the spread against the Hoosiers in their last nine meetings, but they have won by at least 17 points in four straight meetings.

Ohio State faces its toughest test of the season to date on Saturday against Indiana, and the Buckeyes will be adding some previously-unavailable players into the action.

Freshman cornerback Lejond Cavazos, who could become a key member of the secondary if he can play well, will earn his first game action of the season after battling through an injury. And running back Marcus Crowley didn’t appear as unavailable for the first time this season Friday when the report was released. The same can be said for defensive tackle Jaden McKenzie. All three made their way off the availability report, signaling a return to the field could be in the cards for all three.

The Buckeyes will have almost the entire roster available for snaps against the Hoosiers. Here’s the full availability report ahead of the critical Big Ten matchup, with kicker Blake Haubeil’s absence as the headliner:

Bold predictions for Buckeyes against Indiana

Who will break out for the Buckeyes as face their toughest test of the season to date? Which young Ohio State star will make big plays for the Buckeyes against the Hoosiers? How can the Buckeyes beat an Indiana team that is glowing with confidence? The Lettermen Row staff has unanimously picked the Buckeyes to get another big top-10 win, and to get set for kickoff, the guys are again back with Five Bold Predictions for how it’s going to happen.