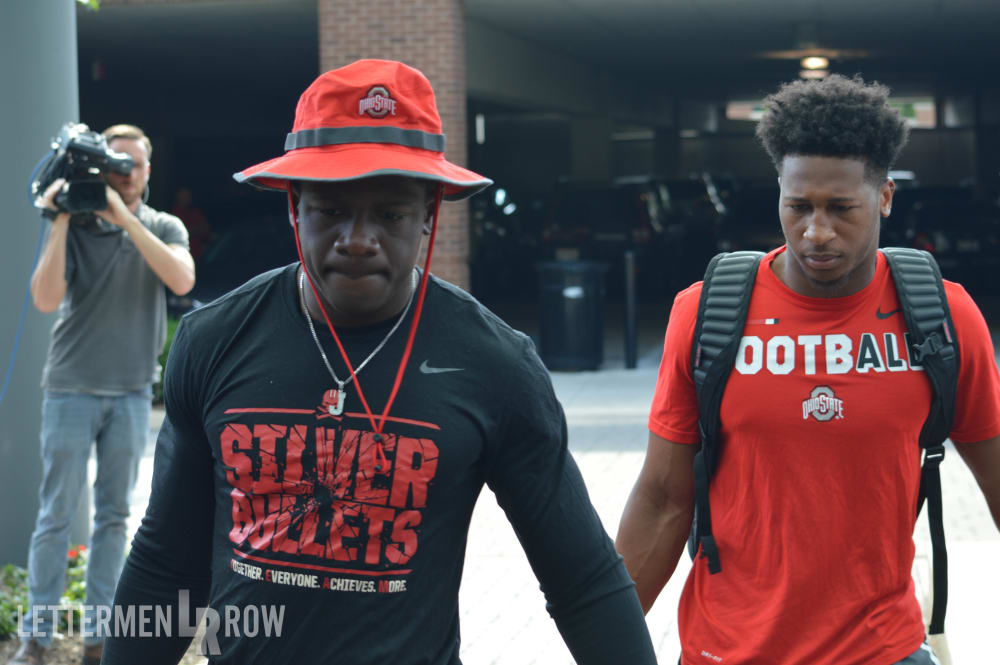 Jahsen Wint and Amir Riep have been charged with rape. (Birm/Lettermen Row)

Two members of the Ohio State football team are suspended after being charged with felonies and arrested.

Amir Riep and Jahsen Wint have been charged with rape and kidnapping by the Franklin County Municipal Court. Both charges are first-degree felonies.

“We are aware that two of our students have been arrested and criminally charged,” an Ohio State spokesperson said. “They have been suspended from all activities involving the football program. We will share more information when available.”

Lettermen Row will continue to update the situation as more details emerge in the case.

Buckeyes searching for huge boost in running back recruiting

Ohio State needs answers at running back recruiting after a disappointing showing on the trail in 2020, and there are few positions in football where the translation from high school to college is as easy to predict as running back. That’s why the Buckeyes are looking to add a bonafide star in both production and measurables, and it’s important for the nation’s best programs every single year to do so.

Where are the Buckeyes looking for answers this time around? Lettermen Row recruiting expert Birm did everyone a favor and broke down the key names to know in the 2021 recruiting cycle at running back as of mid-February.

Some of the nation’s top running backs are considering the Buckeyes, including Camar Wheaton, the top back in the class, Michigan native Donovan Edwards, do-it-all back Will Shipley, hard running North Carolina native Evan Pryor and many more. Who will become a Buckeye in the next few months? Where does Ohio State look for answers? Which back is a priority for Tony Alford and Ryan Day?

Check out the comprehensive breakdown from Birm here.

Jeremy Ruckert certainly could have chosen a school that throws to the tight end more than Ohio State does. But he chose the Buckeyes because he can chase championships and become a well-rounded tight end who can block and catch. Oh, and he can make insane catches like the one-handed touchdown grab in the Big Ten title game.

Now that he has all the tools necessary to be an elite tight end in the Big Ten, Ruckert has an opportunity for a massive 2020 season. Next year might finally be the year Ohio State throws to tight ends, especially with Ruckert and Luke Farrell back in action after productive years last season.

Why is there so much excitement around Ohio State about the potential for Jeremy Ruckert? What has he proven to the Buckeyes after two years in the program? How high is the ceiling for him at tight end? Former Ohio State teammate Rashod Berry was in the Lettermen Row film lab breaking down a few clips and answering those questions in the latest episode of BuckIQ.

The last time Chris Holtmann and the Buckeyes took the floor, they failed to extend a three-game win streak and continue recent good play. The Buckeyes played poorly on the road at Wisconsin, were down by 20 at points of the game and lost by 13 to be swept by the Badgers in the regular-season series.

Now, it’s time for them to put that game behind them.

Ohio State will face Rutgers, a team that hasn’t lost at home this season but has struggled to do anything of note on the road. Luckily for the Buckeyes, they’ll face the Scarlet Knights in Columbus. Kaleb Wesson will look to bounce back from a bad night at Wisconsin. The bench of the Buckeyes will try to regain its footing after a lackluster performance. Ohio State will need better guard play. This game will go far in determining how the rest of the season will shake out for Holtmann and his team.

And it all happens Wednesday at 7 p.m. from the Schottenstein Center on Big Ten Network.