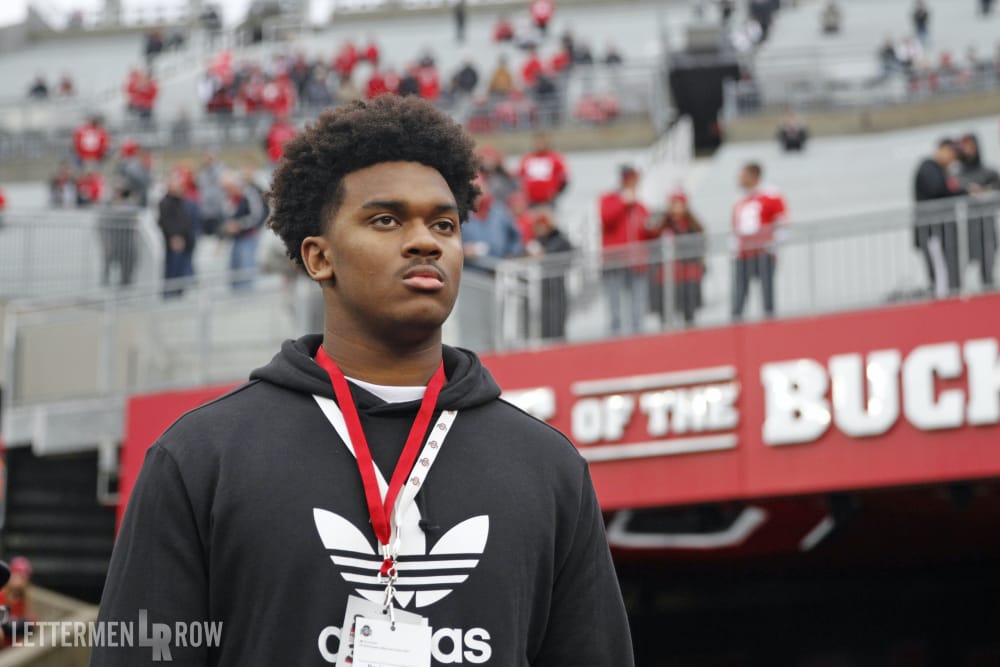 Let’s start with the bad news.

Ohio State 5-star offensive tackle commit Paris Johnson took an official visit to Georgia this past weekend, continuing a recently flirtation with the Bulldogs. This trip to Athens was his third in the last two months, which should be enough to raise some eyebrows at Ohio State. Johnson was one of a handful of the country’s top-ranked players visiting Georgia for its G-Day — a star-studded event that rivals any school’s biggest recruiting weekend.

There’s potentially good news in this, at least from my perspective. This was not an unofficial visit. It was an official. Georgia just burned that resource, and there’s been no indication that there’s been any change in Johnson’s status. The Bulldogs will have to work twice as hard going forward, because any other trips to Athens are coming out of pocket.

Letterman Row recruiting czar Birm also noted that Johnson is expected to take an official visit to LSU sometime in the near future. There’s obviously a bad news component to that update, because Johnson isn’t calling off the search and if given enough chances any school could end up striking gold on the right day if they make an impression on Johnson. But the potential benefits are two-fold. One, that’s another official visit that Johnson can’t use later in the process. But also, it might mean that Johnson might not get to later in the process. If he’s already taking officials, there’s a chance he wraps this up before the season. The earlier the better for Ohio State, since I assume the Buckeyes don’t feel like leaving this in the hands of how the Buckeyes look on the field this fall.

For more on Ohio State recruiting, check out Monday’s edition of Dotting the ‘Eyes.

Harry Miller is different, and he’s perfectly fine with that. The Ohio State 2019 signee, ranked the country’s second-best center prospect, looks like a typical football player — but he’s far from being a typical one. His 6-foot-5, 300-pound frame often leads to overlooking the things that make him unique. He’s going to end up being the valedictorian at Buford High School in Georgia while taking four different AP-level classes. He’s a talented musician and artist and he’s spent the last five summers of his teenage years traveling to Nicaragua, choosing to spend his time helping others instead of playing video games or hanging out with his friends.

Why did Miller choose Ohio State not once, but twice? What makes him tick?  Find out the answer to those questions and more in the latest episode of Birminology on Lettermen Row.

Spring practice is in the books for Ohio State. While there were certainly some impact players who spent some or all of the practices recovering from injuries, that presented an opportunity to younger players to take advantage of some extra reps. With that in mind, Lettermen Row looked back at what happened during spring practice and listed five Buckeyes who will head into the offseason with some momentum.

Ohio State basketball made the hiring of assistant coach Jake Diebler official on Monday. Diebler was hired to replace former assistant coach Mike Schrage, who left in the offseason to take a job at Elon.

“We are excited about the addition of Jake Diebler to our staff,” Buckeyes head coach Chris Holtmann said. “Jake was highly recommended by those he has worked for as well as by many of our former players who are now playing professionally. I appreciated several of them reaching out to recommend him during this process. Jake has shown the ability to recruit at a high level, teach and develop players and his work ethic is highly regarded. His Ohio roots and ties also were important in this process. The Diebler name certainly brings back great memories and I know Jake will work extremely hard to create more in the future.”