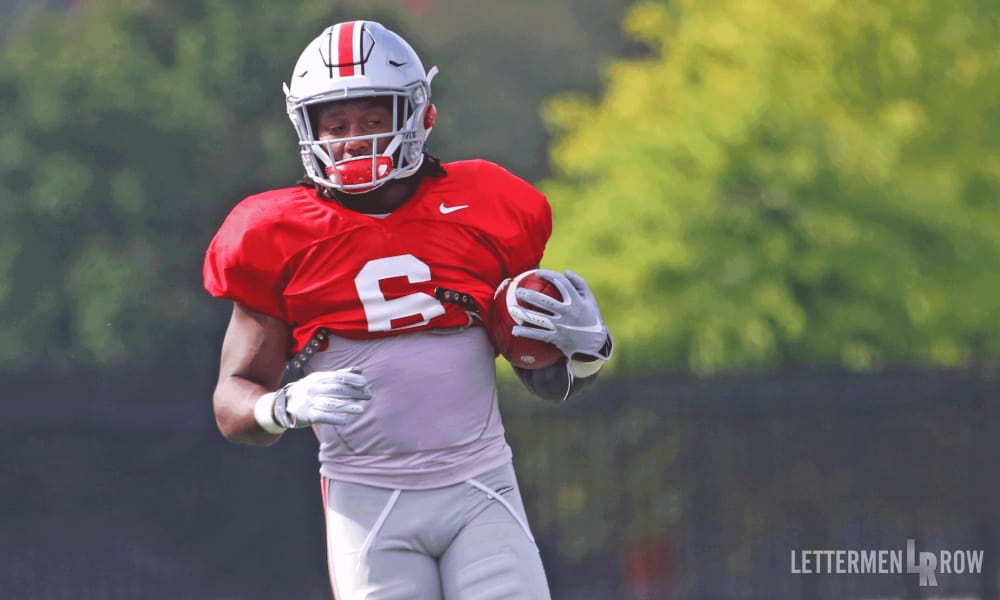 Running back Brian Snead is no longer a Buckeye. (Birm/Lettermen Row)

Brian Snead no longer a Buckeye

The short career of running back Brian Snead is over already at Ohio State.

The school confirmed on Friday that the former four-star recruit from Florida was no longer on campus or participating in workouts with the Buckeyes, ending months of uncertainty about Snead’s status moving forward after playing in two games before an undisclosed disciplinary issue sidelined him for the rest of his freshman season. He rushed 11 times for 37 yards and a touchdown in his only game with the Buckeyes after turning heads during training camp and looking like a potential star rusher down the road.

Brian Snead was once projected to be a key part of the future for the Buckeyes. But that plan can officially be scrapped now.

Another Ohio State name has been entered into the NCAA transfer database as reserve linebacker Keandre Jones pursues his options for the next step in his career.

Once one of the most coveted recruits in the country and still one of the most respected leaders on the roster for the Buckeyes, Jones is part of a crowded unit with no clear path to playing time. And sources familiar with his request to be added to the transfer portal indicate that it’s possible he could stick with Ohio State, but after three years in the program without a chance to show what he can do, Jones is open to a departure.

Where does the Ohio State offense go from here?

The grinding, pounding, methodical offensive approach has been gone for a while now at Ohio State, and it isn’t likely to ever return. But that doesn’t mean the rushing attack is no longer important to the Buckeyes, and this year may actually require something of a trip back in time after the program uncharacteristically finished in the middle of the Big Ten pack in yards on the ground.

That was obviously bound to happen with a generational talent at quarterback in Dwayne Haskins, ridiculous depth and ability at wide receiver and a long-overdue upgrade to the passing schemes. There is always a tradeoff, and Ohio State made its choice — then averaged a full touchdown more per game than any other offense in the league.

So, the offense is obviously not broken. But Ryan Day and his staff are always looking to stay ahead of the curve, and for the Buckeyes moving forward, that likely means finding a way to jumpstart the tailbacks again.

Former Buckeyes standout Terence Dials was back in the Lettermen Row film lab looking at the offensive issues and turnovers for Ohio State men’s basketball, and how the program can get back on track after a handful of consecutive losses in his latest episode of BuckIQ.

Massive recruiting weekend for class of 2020

There’s no way to sugarcoat it: This weekend in Columbus is pretty big for Ohio State efforts to hold on to Doug Nester and ultimately sign him in the 2019 recruiting class. And if Columbus weather allows it, the program is hoping to have a majority of its 2019 class on campus to meet him.

Getting the whole gang together is a major piece of the weekend’s plans for Ohio State as it tries to bring all of the new coaches and new signees together for the first time. Specifically for Nester, this weekend will be designed to serve as a reminder that Columbus is the right fit, it’s close to home and the Buckeyes have never wavered in their commitment to him or his family. Yes, it’s huge for Ohio State, Ryan Day and for Doug Nester.

The national ranking has already slipped away from Ohio State.

If the Buckeyes aren’t careful, what once appeared to be a spot comfortably saved for the NCAA Tournament might fall by the wayside as well.

There is obviously still plenty of basketball to be played at this point in January. But the Buckeyes are still winless since the New Year, dropping their fourth consecutive Big Ten game with a 75-61 home loss on Friday night to No. 19 Maryland that continued to erase the memories of the program’s strong start to the season.

For more coverage, check out Austin Ward’s Three Points from the matchup.