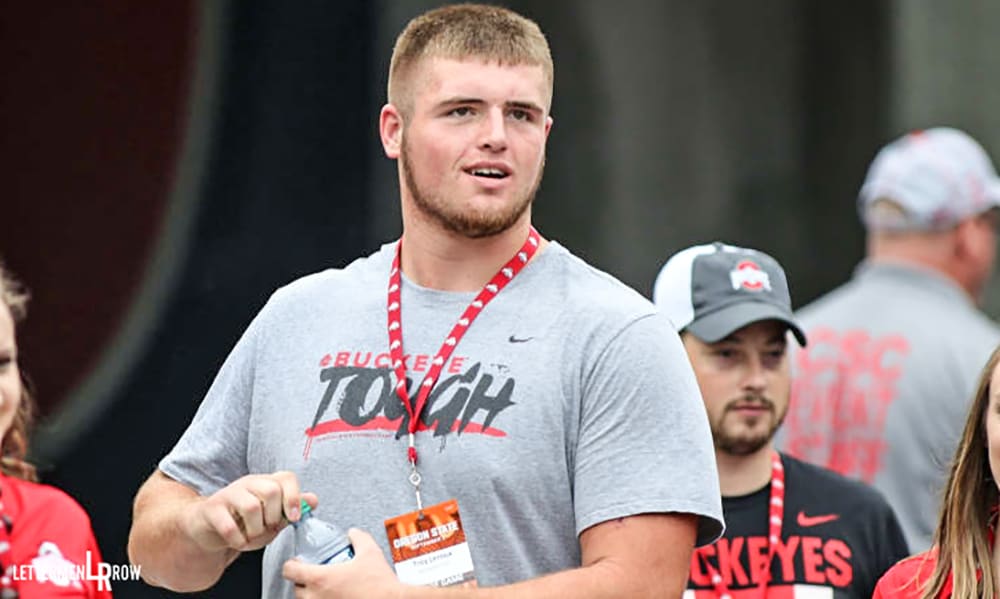 Ohio State has missed its ideal number of offensive line recruits in the last two classes, but the Buckeyes are working to make sure that doesn’t happen again this year — especially after some high-profile misses in the Buckeye State. Ryan Day has committed to recruiting inside Ohio, and the results are showing. On Monday evening, Norwalk prospect Trey Leroux committing to the Buckeyes.

A massive 6-foot-8, 320-pound tackle for the Truckers, Leroux is currently ranked as the state of Ohio’s 38th-best 2020 prospect — and he’s commitment No. 7 in the 2020 class for the Buckeyes. The current rating might appear a bit modest, but he’s sure to see a bump after being coveted so early and so absolutely by Ohio State.

The Ohio Prep Sportswriters Association Northwest District Lineman of the Year for Division III, Leroux was a first-team All-State selection after helping lead Norwalk to the semifinals of the state playoffs for the first time since 1974.

The first noticed about Trey Leroux is that he’s big — really big. Leroux is a solid 6-foot-8 and in the 320-pound range as a high school junior. He’s a young man who has the frame most schools are looking for in an offensive tackle, and he’s just beginning to scratch the surface of what he can turn himself into.

There’s a tendency for young players in his mold to be complacent because of the size and strength discrepancy between them and the majority of their opponents. That didn’t happen for Ohio’s 38th-ranked prospect throughout last season, and in fact, Leroux’s game tape improved markedly from the start of his junior year to the end of it. For anybody looking for a reason why he was offered now rather than making him wait through another few months of relationship building and evaluation, that’s one of the factors. Ohio State has seen development happening already, and his body type projects quite well for a good collegiate strength staff — and the Buckeyes strength staff is more than just good.

Right now, it’s that frame and natural strength possessed by Leroux, who wrestled earlier in his high school career, has working in his favor. He’s got some tree-trunk legs and is athletic enough to do the full splits, according to his high school coach, Todd Fox.

Be sure to check out the article containing Birm’s full analysis, including on how Leroux impacts the recruiting class.

For the first time since Kaleb Wesson was suspended, Ohio State basketball got some good news. The news, of course, is that Wesson is back. After missing three games for a violation of athletic department policy, the star sophomore for the Buckeyes has been cleared for a return in what is shaping up to be an NCAA Tournament play-in game against Indiana on Thursday in the Big Ten tournament.

“Kaleb Wesson will play,” Buckeyes coach Chris Holtmann said on Monday. “It was obviously a challenge [without him], beyond the fact that we were playing good teams and two of those were on the road. It was a challenge, and it’s different if you know he’s going to come back versus not expecting him to come back.

Eastside Catholic is a high school with less than 700 kids roaming its hallways, but there is no shortage of talent suiting up on Friday nights for the Crusaders. The Seattle-area program houses four of the country’s best football players, including three of the top five players in the state of Washington’s 2020 class.

One of those players is receiver Gee Scott, the country’s 13th-ranked receiver and the 67th-ranked overall prospect in the current recruiting cycle. Scott committed to Ohio State on Christmas Day, ending a recruitment that had seen him in the national spotlight for a little more than a year.

Scott joined Lettermen Row’s Birminology this week to talk about those recruiting efforts, his relentless work ethic, why he picked the Buckeyes just three weeks after Urban Meyer’s retirement and more on this week’s episode. Be sure to check it out, because it’s a good one.

The Buckeyes offered Bellflower (Calif.) St. John Bosco 4-star 2021 receiver Beaux Collins at the end of December, and the 6-foot-4, 190-pound sophomore was in Ohio soon thereafter taking in his first visit. That trip was more of a well-timed coincidence rather than a well-planned campus visit.

“The first trip out to Ohio was for my sister’s birthday,” Collins said. “We decided to drive out to Columbus since I had just received the offer a couple of weeks prior.”

Collins will return to Ohio State on March 22 as part of a group of St. John Bosco’s underclassmen making their way through the Midwest and a number of college stops.

“I’m hoping to see the offensive coaches in action with the players and to see how the practices are run,” Collins said. “I also would like to see the energy of the new and returning players.”

For more on Ohio State recruiting, check out Monday’s edition of Dotting the ‘Eyes.