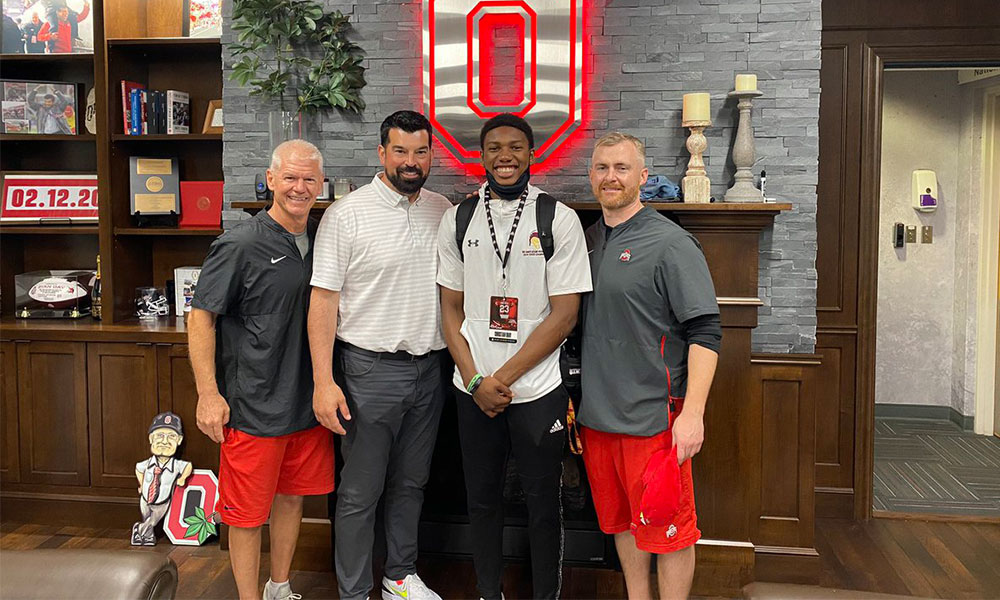 Ohio State opened its in-person summer camp season Wednesday. And the Buckeyes came away impressed with a handful of prospects.

One of the most impressive: 2023 DeSmet (St. Louis, Mo.) High School four-star cornerback Christian Gray. The Buckeyes extended a scholarship offer to Gray on Wednesday after watching him go through drills at the one-day camp.

The 6-foot, 175-pound cornerback already has received offers from Kentucky, Iowa State and Kansas State, but now he holds one from one of the best programs in the country. He is currently rated as the No. 206 overall player and No. 21 cornerback in the country, according to 247sports.com.

But after working out for the Buckeyes, he certainly is high on their board of coveted cornerbacks in the 2023 class. So much so that he earned an offer from Ohio State after the camp.

Christian Gray wasn’t the only impressive player from the camp Wednesday.

A member of the 2022 class, Grant participated in the morning session of Tuesday’s camp. Ohio State’s offer marked just No. 12 of his recruitment. A 6-foot-4, 335-pound defensive lineman from Merrillville High (Ind.), his speed impressed the Buckeyes coaching staff. With a frame more fit to be a nose guard, Grant’s 40-yard dash caught Ohio State’s eyes. Just a 3-star recruit currently, he holds offers from the likes of Michigan, Wisconsin and Nebraska.

The final three offers of the day came in the afternoon. Ohio State watched a handful of talented quarterbacks, but Holstein and Iamaleava were the only two to leave with offers.

Lee, the No. 10 cornerback in the 2023 class also received an Ohio State offer after working out at the Woody Hayes Athletic Center. A 6-foot, 160-pound defensive back, Lee holds offers from Tennessee, Auburn and Notre Dame. From Cedar Grove (Ellenwood, Ga.), Lee looked well-built and fluid going against wide receivers in one-on-one drills.

How Gee Scott switched from receiver to tight end

Gee Scott was one of the best wide receivers in the country in the class of 2020. So why did he decide to switch to tight end after just one year at receiver for the Buckeyes? It wasn’t an easy decision.

But an NFL legend helped him make the decision. Lettermen Row has more on how that came to be:

After [Richard] Sherman discussed playing tight end, Scott made sure to think about the idea before just jumping over to a new position. He has dreams of playing professionally. Could tight end be an ideal fit for the former top-50 overall player in the country? Scott and his father thought so, and the Ohio State coaches agreed.

READ: Why Gee Scott pushed for move to tight end for Buckeyes