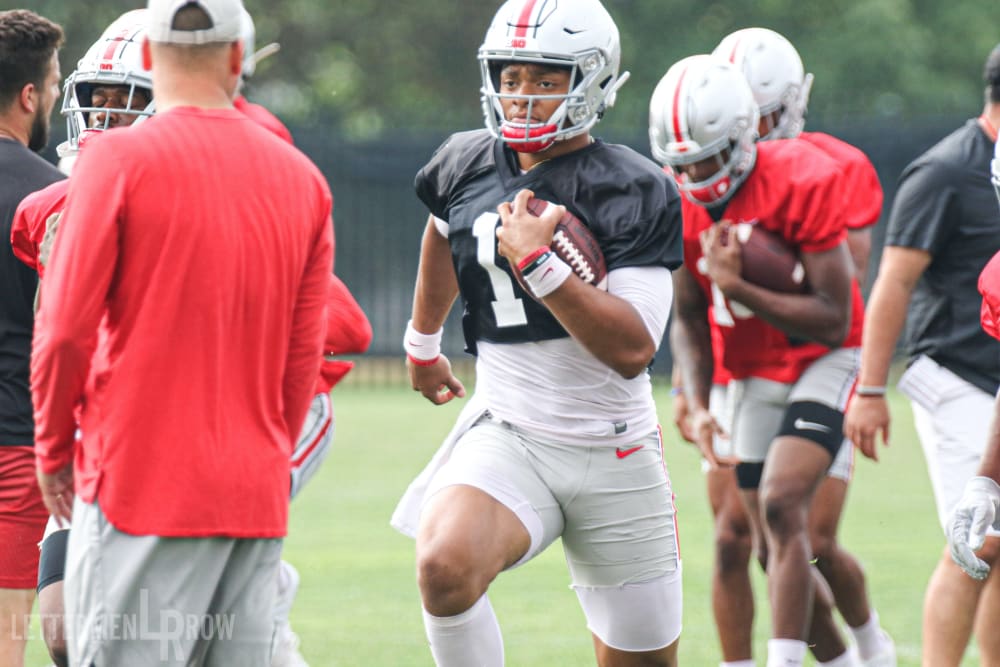 Ryan Day still didn’t make it official, but his conversations about the quarterback position might as well have come with a flashing neon sign pointing at Justin Fields. By the time the Buckeyes are done with this second full week of camp, Day is prepared to make his pick, and it’s going to be the guy who was expected to win it right from the start.

Day would later detail the strides that Fields has made when it comes to protecting the football, leading the offense and delivering his passes on time. There was never much uncertainty in the first place, but that should all be officially erased at this point.

Be sure to check out what we learned about Ohio State on Wednesday.

The full press conference video can be found here.

In February, Darrion Henry was a top 40-national prospect according to 247Sports.com composite rankings and considered a sure-fire, can’t-miss defensive line prospect. Somehow, despite no games being played and while he recovered from offseason surgery, Henry saw his ranking tumble — including a near 500-spot drop in 247Sports.com’s own rankings.

It’s not something he understands. But it is something that he will use as fuel in what he hopes will be a comeback season to remember.

“I’ve just got to make them feel me,” Henry told Lettermen Row at Princeton’s Media Day. “I know what I am capable of, and if you put on the tape, it speaks for itself. I don’t know how someone can think there are 500-plus players better than me, but it really doesn’t matter.”

“I’m not one of the guys that’s all about the rankings,” Henry said. “But I’m like, ‘You know I had surgery?’ I wasn’t really tripping that much, and I laughed it off a little bit. But it was one of those moments where I’ve got to show them how I got there in the first place. It really humbled me more than anything, really.

How are the remaining position battles going to be resolved in the coming days? What positions remain up for grabs for Ohio State? How high is the ceiling for the back-to-back Big Ten champs? With roughly half of training camp complete, here are five looming questions Lettermen Row still has for the Buckeyes.

This week on Lettermen Live presented by Byers Auto, senior writer Austin Ward was joined by Lettermen Row contributors Tim May and Birm to discuss what they saw from the Buckeyes on the practice field Wednesday. They also chatted about the press conference with Ryan Day and Greg Mattison.