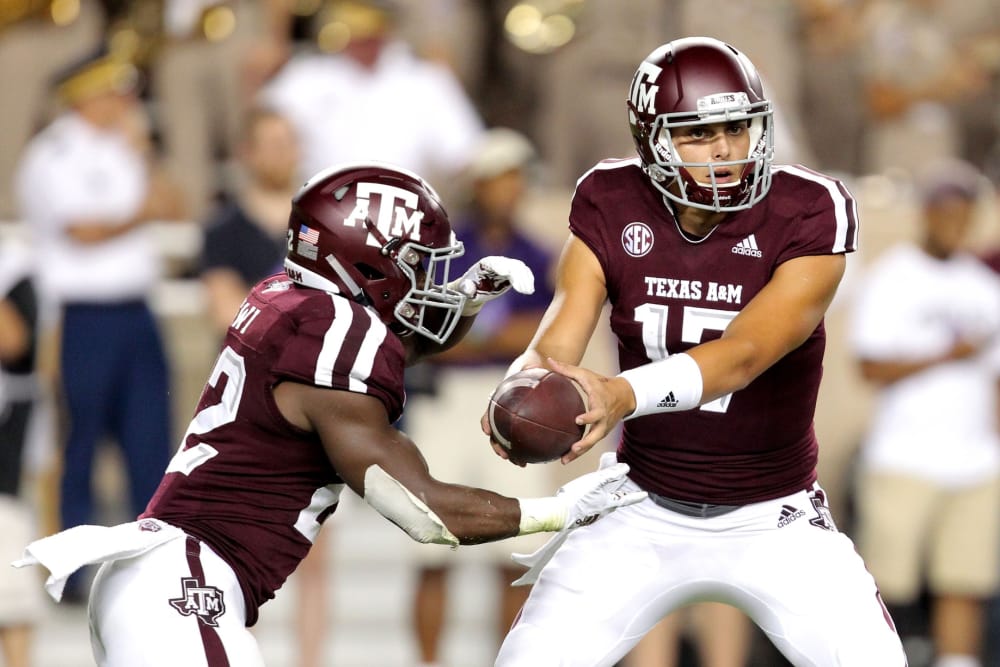 Texas A&M quarterback Nick Starkel reportedly is looking to transfer, and is interested in the Buckeyes. (Erik Williams-USA TODAY Sports)

A new quarterback is interested in the possibility of transferring to Ohio State, which would give the Buckeyes some much-needed depth at that position group.

According to a report from Travis Brown of the Bryan Eagle, Texas A&M quarterback Nick Starkel will be moving on to a new program. Starkel was a 3-star recruit in the Class of 2016 according to the 247Sports composite rankings. Having just completed his third season (one of which was a redshirt year), he intends to pursue a graduate transfer that would make him immediately eligible for the next two seasons.

With the job appearing to belong to Kellen Mond going forward with the Aggies, Starkel didn’t have much of a path forward. Still, he’d be a valuable addition to the Buckeyes both in terms of depth and experience. A three-quarterback room is a precarious situation, and adding a fourth player to that mix would add security and bolster competition.

For more on Starkel and updates from the recruiting front, check out a special Ryan Ginn edition of Dotting the ‘Eyes from Wednesday evening.

Could a position change possibly help any Buckeyes?

The days of the two-way star are basically long gone, and the evolution of offenses and the number of plays in a game are probably the main culprits right along with the need for specialization. But that doesn’t mean Ohio State wouldn’t have options for players who could line up on both sides of the ball if it wanted to, which is another perk of recruiting the best athletes in the country year after year.

Ohio State also has a couple signees who could fit on either side of the ball, perhaps most notably with running back/linebacker Steele Chambers and do-it-all weapon Craig Young. The Buckeyes don’t have to rush to any decisions with those incoming freshmen, of course, but what they eventually decide will be fascinating to watch once the newcomers really get started with the program. Since they haven’t initially played anywhere yet, they don’t exactly count as options to switch.

So, who could do it on the Buckeyes current roster? Austin Ward takes a deep dive into the Scarlet and Gray personnel to see which guys could go both ways if the two-way craze returns to college football at some point.

In the latest trip to the Lettermen Row film lab for former Ohio State standout Terence Dials, BuckIQ focuses on both the positives and a couple negatives with guard Duane Washington Jr. as the program turns to him more to help get back on track.

This week on Lettermen Live, Beanie Wells joins Austin Ward in studio to break down an extremely busy offseason for Ohio State. The two discuss a very wide range of topics regarding Ohio State football, including the hiring of Greg Mattison and Al Washington from Michigan, Tate Martell‘s transfer to Miami (Fla.) and how J.K. Dobbins said following the Rose Bowl that the Buckeyes are winning it all next season.

Then, Birm joins Austin for a bit of a recruiting recap as Ohio State received a pledge from 3-star offensive lineman Jakob James earlier this week and breakdown how the status of offensive line target Doug Nester still remains a mystery after a solid weekend in Columbus.

The hole is getting deeper, and it’s getting harder to see a way out for Ohio State.

Even after a hot start, even with a second-half barrage of jumpers falling and luck on their side for halftime heaves from midcourt, the Buckeyes still can’t snap out of their ongoing funk Wednesday at home against Purdue and the Boilermakers handed the Scarlet and Gray its fifth-straight loss — 79-67.

How can Ohio State right the ship? What happened in the latest defeat? Lettermen Row and Austin Ward are breaking it down with Three Points from the latest setback.