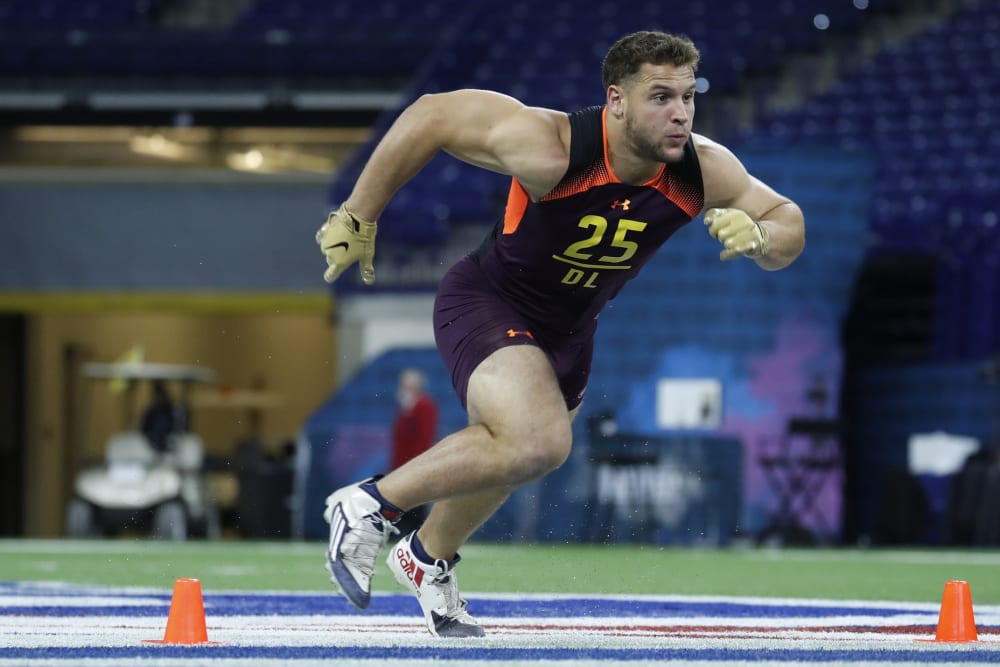 Nick Bosa was just one of many former Ohio State players to perform well at the NFL Combine. (Brian Spurlock-USA TODAY Sports)

Pronouncing himself as healthy, strong and confident as he’s ever felt is one thing for Nick Bosa.

Proving it is another, and the former Ohio State defensive end is ready to leave no doubt that he should be the No. 1 overall pick with a dominant showing at the NFL Combine.

Bosa started it by publicly backing himself and flashing a smile as he called it a “big mistake” for Arizona to pass on him with the first selection. Then he went out and ripped off 29 reps in the bench press testing drill, which is a rock-solid way to show the talent evaluators that his core-muscle injury is no longer a problem.

“I’ve been talking myself up to them pretty good, so I’m definitely ready to get out on the field, get on the bench and definitely leave no doubt,” Bosa said on Saturday. “I’ve been training at full speed for a couple months, but actually feeling like myself, not feeling soreness after [workouts], that’s probably been a few weeks.

“I just want to do everything I can here to let all the coaches here, let all the teams know that I’ll be ready to go and I’ll be a good NFL player.”

Lettermen Row senior writer Austin Ward looks closer at how despite returning from a devastating injury, Nick Bosa seems as strong as ever and ready to show how worthy he is of the top selection in the 2019 NFL Draft.

Why is Dre’Mont Jones working out at linebacker?

Dre’Mont Jones was as surprised as anybody.

The former Ohio State defensive tackle also found out the same way as everybody else that somebody, somewhere in the NFL believes he might be able to play linebacker.

So, a request was made for Jones to participate in the NFL Combine testing drills at that position in addition to his normal duties on the defensive line. And after seeing that information pop up on Twitter on Saturday morning, Jones accepted the offer as part of his overall mission at Lucas Oil Stadium to enhance his value and potentially solidify a spot in the first round of the draft in April.

Many current Ohio State targets were paying attention to the Buckeyes and their combine performances over the weekend. Aside from 2021 5-star Marvin Harrison, Jr., a trio of Ohio State targets from California, Washington and Texas all commented about the way Johnnie Dixon, Parris Campbell and Terry McLaurin performed in Indianapolis.

Recent offer Jalen McMillan, who has quickly become one of the Buckeyes top targets in the 2020 class at receiver, may have said it best.

“It really shows that they know how to develop receivers,” McMillan said.

Another Washington standout — and maybe the only player high on the board for Hartline and the Buckeyes in 2021 — is Emeka Egbuka. The Steilacoom product saw what he’s come to expect from Ohio State’s Zone 6.

“It definitely made a good impact,” Egbuka said. “It makes me think they are doing everything right, and obviously have one of the best strength staffs in the country. They also had the best routes, which excites me.”

For more reactions to the Buckeyes combine showing and a full recruiting update from the weekend, check out Sunday’s edition of Dotting the ‘Eyes.

Ohio State knew it was going to be shorthanded against Purdue, but it turns out it was just short. Short on depth, short on shots and short when trying to find a rebound. The Boilermakers weren’t short on anything.

It was so lopsided that if Purdue only scored four points in the entire second half, they still would have beaten Ohio State on Saturday.

Purdue shot a blistering 58-percent from the floor in the first half — making eight three-point shots in the first half to Ohio State’s six total field goals — running out to a 48-20 halftime lead and never looked back. Using its decisive length advantage, No. 14-ranked Purdue recorded a 39-27 rebounding advantage and kept the pressure on throughout the second half, drubbing the Buckeyes 86-51.

Lettermen Row director of recruiting Jeremy Birmingham analyzes the tough outing for Ohio State over the weekend with Three Points.