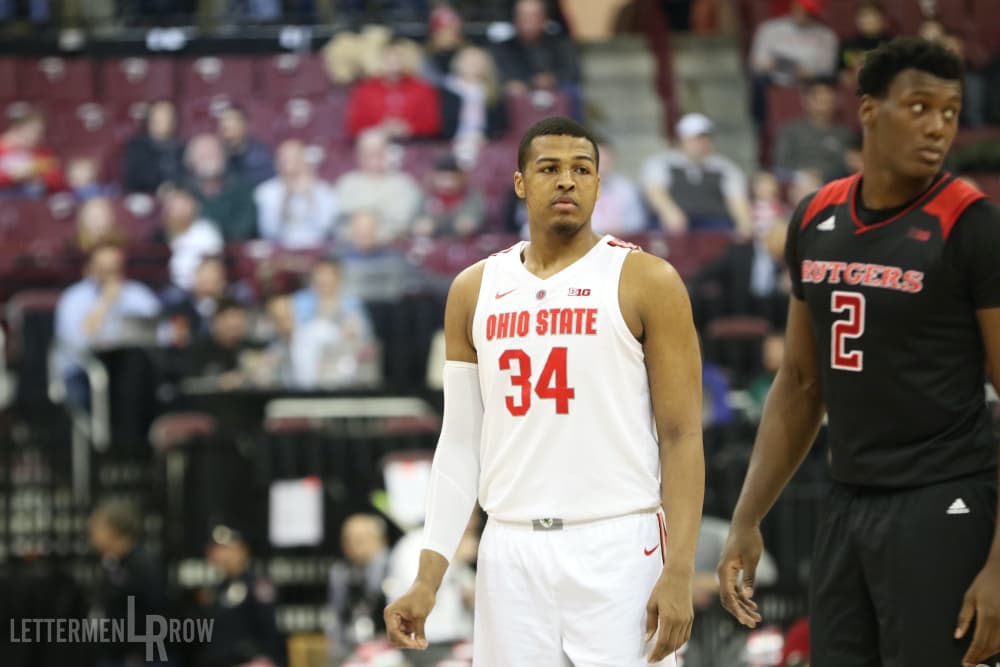 Ohio State will be without its star center, Kaleb Wesson, for the program’s big game at Purdue on Saturday. The school released a statement on Friday afternoon saying the Buckeyes leading scorer and rebounder has been suspended for a violation of athletic department policy.

“Kaleb Wesson, a sophomore center on the Ohio State men’s basketball team, has been suspended for a violation of Ohio State Athletics Department policy, Chris Holtmann, head coach of the Buckeyes, announced Friday,” the statement read. “Wesson will return this season.”

It’s the second time that Holtmann and the Buckeyes have put Wesson, averaging 14.6 points per game during his sophomore season, on the bench. He was briefly suspended during the 2017-18 season for what Holtmann described as “a failure to meet the expectations of the men’s basketball program,” though that suspension was “specifically regarding time management” and was just one-game long.

There’s no timetable for a return this time around, and that couldn’t come at a worse time for Ohio State as they begin the final three games of the regular season with a pivotal game against the Boilermakers on Saturday.

But the Ohio State quarterback makes it quite clear that he believe he would be worth taking with the No. 1 overall pick, even if he’s not going to publicly campaign for that top spot.

Heading into a key on-field performance after a couple days of meetings already with franchises at the NFL Combine, though, Haskins isn’t hiding from the pressure of what now appears to be another head-to-head battle with Oklahoma’s Kyler Murray to be the first passer off the board next month. And just like he has throughout his prolific run with the Buckeyes, the self-assured confidence is hard to ignore as Haskins keeps betting on himself.

Lettermen Row senior writer Austin Ward wrote about how Haskins confidence is high ahead of his workout at the 2019 NFL Combine, and you can also hear from the former Ohio State quarterback as well as receivers Johnnie Dixon, Parris Campbell and Terry McLaurin from Day 2 of the combine at the Lettermen Row YouTube channel. Stay tuned throughout the weekend as three more Ohio State players go through the process in Indianapolis.

There was no obvious replacement for everything Ohio State was losing waiting directly in the wings But there might be one on the way as the Buckeyes build for the future with high-level recruits like Alonzo Gaffney preparing for their chance to follow in the footsteps of a Big Ten Player of the Year.

How big of a role can Gaffney play next season? How high is the upside for the dynamic athlete? Former Ohio State big man Terence Dials was in the Lettermen Row film lab for a BuckIQ episode focusing on Alonzo Gaffney and what the touted signee might provide down the road.

Do the Buckeyes still have the advantage with Mekhail Sherman?

If you want evidence of the fickle nature of recruiting, the Washington D.C. trio of Mekhail Sherman, Rakim Jarrett and Tre Williams is a pretty good example of it.

That group has a total of 16 “Crystal Ball” predictions made between them and 15 current picks are in Ohio State’s favor. If you read our interviews with those three guys last July, it’s easy to understand why people were bullish on the Buckeyes chances. Four of the predictions are for the 4-star defensive tackle, Williams, who is committed to Clemson and won’t end up a Buckeye barring something bizarre happening. Ohio State never really went “all in” for him and he opted for another program that was.

The Buckeyes are all in on Sherman and Jarrett, though. Each visited Ohio State for the first time — along with Williams — last summer. Jarrett, the country’s second-ranked receiver, has family ties in Canton and there’s a lot of speculation that he’s a “when” not “if” type of recruit for the Buckeyes, which is something that I’m not currently subscribing to.

Lettermen Row director of recruiting Jeremy Birmingham provides a full update on where Ohio State stands with Sherman in Friday’s Recruiting Question of the Day.