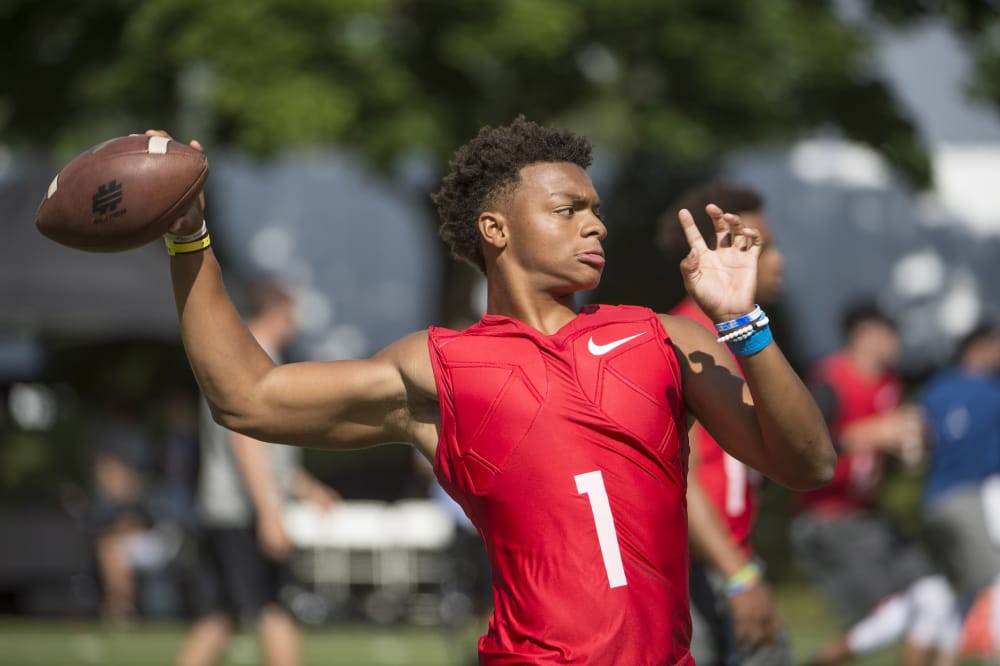 According to Westgate Las Vegas Superbook, Ohio State quarterback Justin Fields sits third with 6-1 odds to win the coveted award behind Clemson’s Trevor Lawrence at 3-1 odds and Alabama’s Tua Tagovailoa — who is favored at 5-2 odds. Oklahoma gunslinger Jalen Hurts is also back in the race after sitting behind Tagovailoa last season and then transferring to the Sooners, as he is tied with Fields with 6-1 odds to claim the Heisman Trophy.

The Buckeyes also had another name on the list, as running back J.K. Dobbins checked in at 50-1 odds.

After two years of starting experience in the Big Ten and with the ability to transfer as a graduate in hand, Jonah Jackson emerged as one of the most coveted offensive linemen available in the portal this offseason. And he was courted as such, most notably with Oklahoma and Texas fighting with Ohio State when the final decision was made.

But sometimes the most natural fit is obvious. Jackson is familiar with how Ohio State operates from his time playing under former program assistant Chris Ash. The Buckeyes had a clear, pressing need for a veteran who could fill multiple roles on the offensive line, and Jackson obviously wants to continue to be a starter. And now, he may have that chance this fall.

What does his addition mean for Ohio State moving forward? Former Buckeyes lineman Reid Fragel was back in the Lettermen Row film lab looking at some tape of Jonah Jackson to identify some strengths and the areas where he can help during his season in Columbus in the latest episode of BuckIQ.

How much will the quarterback run game factor in for the Buckeyes?

The Ohio State offensive gurus have proven throughout their careers that they will tailor an attack around the strengths of the quarterback, and that’s exactly what they will do again with Justin Fields or Matthew Baldwin. And the fact that the Buckeyes are going into the season relatively inexperienced and currently short of the depth they would ideally like isn’t going to change their approach.

If Fields wins the starting job, his mobility is absolutely going to part of the game plan. But just because he’s more dangerous as a rushing threat than Dwayne Haskins was doesn’t mean Ohio State is going to turn him into Braxton Miller. In general, Ryan Day has worked to shift the Buckeyes away from being overly reliant on the quarterback to run the football, but he’s also not going to leave a potentially dangerous weapon unused.

Who are primary options for Ohio State in the secondary?

Ohio State is going to need a serious influx of talent in the Class of 2020 in its secondary, especially after signing only two defensive backs in the last cycle.

There are a lot of options out there that new secondary coaches Jeff Hafley and Matt Barnes need to get to know. The long, storied history of Ohio State cornerbacks will open doors for Ryan Day’s new assistants, but that duo will need to walk through them and deliver some of the country’s best defensive backs.

Who are some of the possible options at the position? Lettermen Row director of recruiting Jeremy Birmingham looks at a few candidates in Wednesday’s Recruiting Question of the Day.

Lettermen Row spoke last month with Buckingham Browne & Nichols School (Cambridge, Mass.) offensive tackle Zak Zinter, the country’s 28th-ranked offensive tackle and a player who has been working for months to get a visit to Ohio State scheduled. It’s a trip he’s wanted to arrange since the start of the 2018 season.

“I haven’t been to the school yet,” he told Lettermen Row in September. “I’m hoping to visit in the spring.”

For more on Zinter and a full recruiting update, check out Wednesday’s edition of Dotting the ‘Eyes.

Ohio State basketball has its share of flaws, but effort has never been one of them under second-year head coach Chris Holtmann.

This could have been a lost season. It’s the year the bill came due for the recruiting blunders that marked the end of the Thad Matta era. Of the eight high schoolers signed in the Class of 2015 and Class of 2016 — players who would be juniors and seniors on this year’s team — seven lasted less than two seasons. As such, the talent level on this year’s team isn’t where it needs to be. Last year’s NCAA Tournament squad was led by Big Ten Player of the Year Keita Bates-Diop and a host of seniors including Kam Williams and Jae’Sean Tate. Those players are gone now, and the ones who were supposed to replace them have been gone for even longer.

A hot start masked some of the problems that this unit was always destined to face, but Big Ten play revealed the offensive limitations lurking under the surface. But give credit where credit is due: Ohio State plays hard for Holtmann every night, and that’s a big part of the reason the Buckeyes are almost certainly going to the NCAA Tournament as long as they can avoid a loss to lowly Northwestern in the penultimate game of the regular season.

Lettermen Row’s Ryan Ginn looks back at how the Buckeyes relentless attitude likely earned them a spot in the field of 68 next month.