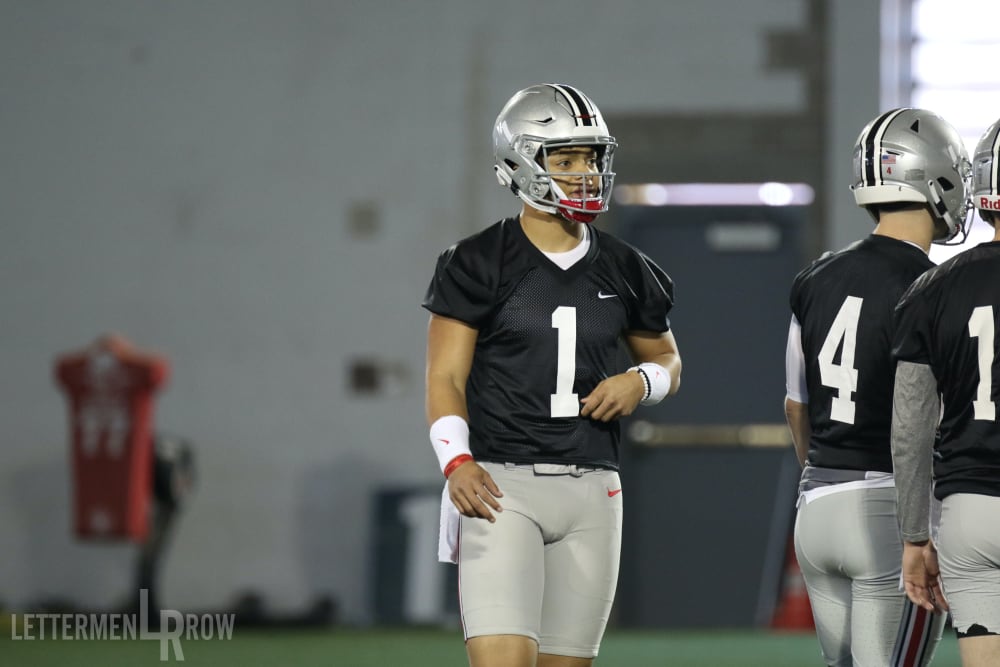 Ohio State will practice for the second time this spring on Friday morning. This will be the Buckeyes’ last practice before a week off for spring break. After practice, the media will have a chance to speak with the Ohio State quarterbacks as well as quarterbacks coach Mike Yurcich. Be sure to stay tuned for coverage on Justin Fields and the quarterback battle (such as it is).

As noted above, the Buckeyes have practiced just once heading into Friday. But what’s the fun in following college football if you can’t make some observations until a certain amount of time has passed? That would be terrible and boring, which is why we’re getting ready for practice No. 2 by taking a look at who performed well during the first practice on Wednesday.

So, which Buckeyes caught the most attention during that opening workout at the Woody Hayes Athletic Center? Here are some Lettermen Row picks.

Justin Barron blown away on visit

Ohio State hosted Suffield (Conn.) Academy 3-star athlete Justin Barron for the first time on Wednesday. Barron, a 6-foot-4, 210-pound prospect ranked as the country’s No. 82 athlete in the Class of 2020, has been in regular communication with the Buckeyes since last September when he was in contact with Ryan Day.

“I’ve been hearing from them since September 1, when they were first able to text,” Barron told Lettermen Row on Wednesday. “At first it was Coach Day when he was assistant, but know it’s [assistant secondary coach Matt] Barnes and [Director of Player Personnel Mark] Pantoni.”

Barron is capable of playing offense or defense, either at outside linebacker or at tight end — and he has no preference. He doesn’t have an Ohio State offer but holds six current offers with Boston College, Syracuse and Connecticut among them. He said his trip to Ohio State helped him see a different level of college football program.

“It was a great visit,” he said. “The facilities are definitely eye-opening. In practice, just the way everyone was competing and focused was on a different level. The energy was high all practice, and they were just flying around the entire time.”

For more on Ohio State recruiting, check out Thursday’s edition of Dotting the ‘Eyes.

Beanie and Boom welcomed former Ohio State teammates Chimdi Chekwa and Bryant Browning on this week’s podcast. A lot of ground was covered including why choosing Ohio State was a great decision, life after football and starting a business.

Chekwa and Browning now own The Pit BBQ Grille in Columbus, which is where this podcast was recorded.

The loss of Kelsey Mitchell proved to be far too big an obstacle for the Ohio State women’s basketball team to overcome. The Buckeyes, who were a fixture in the top-25 during Mitchell’s four years, were bounced in the first round of the Big Ten Tournament after blowing a 13-point lead against Wisconsin.

At 14-13 overall and 10-8 in conference play, the Buckeyes weren’t in serious contention for an at-large bid and will miss the NCAA Tournament for the first time since the 2013-14 season — which, perhaps not coincidentally, was the last season before Mitchell arrived.