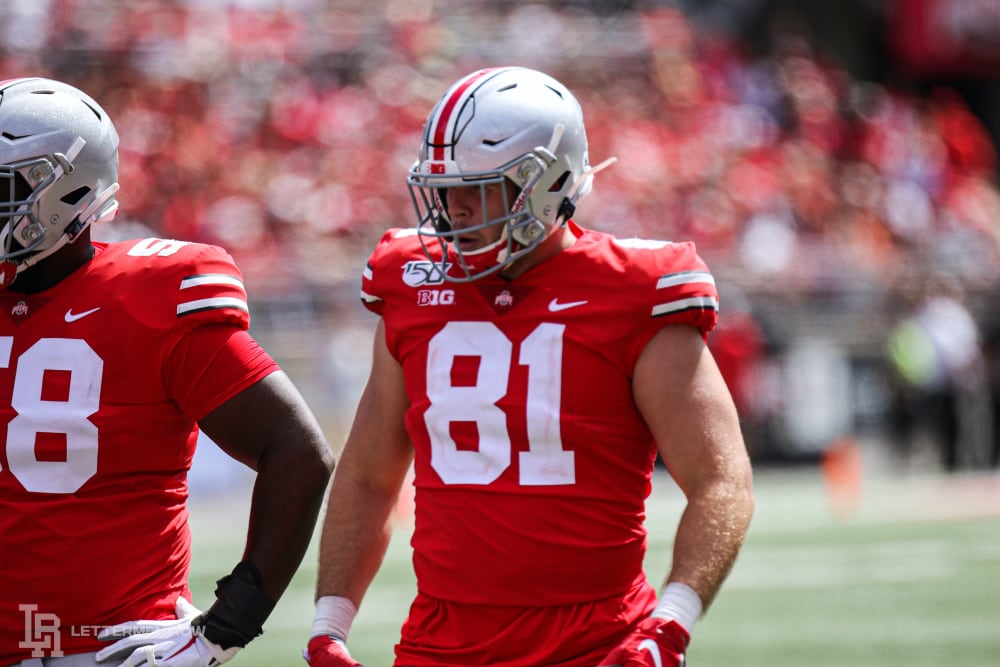 Jake Hausmann spent years as a dependable blocker who could catch the ball when thrown to him at Ohio State. He was a leader in the tight end room last year.

Now he has a chance to stick on an NFL roster. Hausmann wasn’t selected in the NFL draft over the weekend, but he did sign a free agent contract with the Detroit Lions after the draft concluded. He is now with four other former Buckeyes on a roster fighting to climb out of the bottom of the NFC North.

Hausmann joined 14 other Buckeyes to either be drafted or signed after the draft to contracts. He’ll team up with Jeff Okudah, Jonah Jackson, Jashon Cornell and Taylor Decker on the Lions roster.

And he’ll have a chance to land on that roster during the next few months. Hausmann is officially heading to Detroit as an undrafted free agent.

It’s been a whirlwind couple of weeks for the 6-foot-2, 185-pound Stokes. He’s added scholarship offers from Alabama, Notre Dame, Georgia, Florida, and LSU, among others, all since April 20. A three-star prospect now, his offer list will force many to reassess their evaluations.

Kye Stokes sees no more reason to assess his own. The big-time athlete from Florida has become a major national recruit but he’s already found what he’s looking for and his college choice is made. How did things happen so quickly for him and the Buckeyes? What does Stokes think of the other Ohio State coaches? What role does he see himself playing in the defense?

The Buckeyes newest commit joined Lettermen Row’s Jeremy Birmingham for a special Birminology to talk about his decision to commit to the Buckeyes and his crazy couple of weeks.

Ohio State has had the most success of any school in the last two NFL drafts. With another draft in the books, the Buckeyes have had at least 10 players selected in back-to-back drafts. That’s rare.

A first-round quarterback. Two offensive linemen selected. Players at every level of the defense. The Buckeyes draft class wasn’t top-heavy, but it was as deep as any in the country this spring. The Buckeyes are the only program with back-to-back drafts with double-digit picks. And that could continue next year, as Ohio State will yet again have one of the deepest and most talented teams in the country, led by potential first-round picks Chris Olave, Garrett Wilson, Thayer Munford, Zach Harrison and Tyreke Smith/

But that’s next year. The Buckeyes yet again had an impressive showing during draft weekend. Players from every angle of the roster were taken. And the draft provided another example of the success Ohio State has had on the field in the recent past.