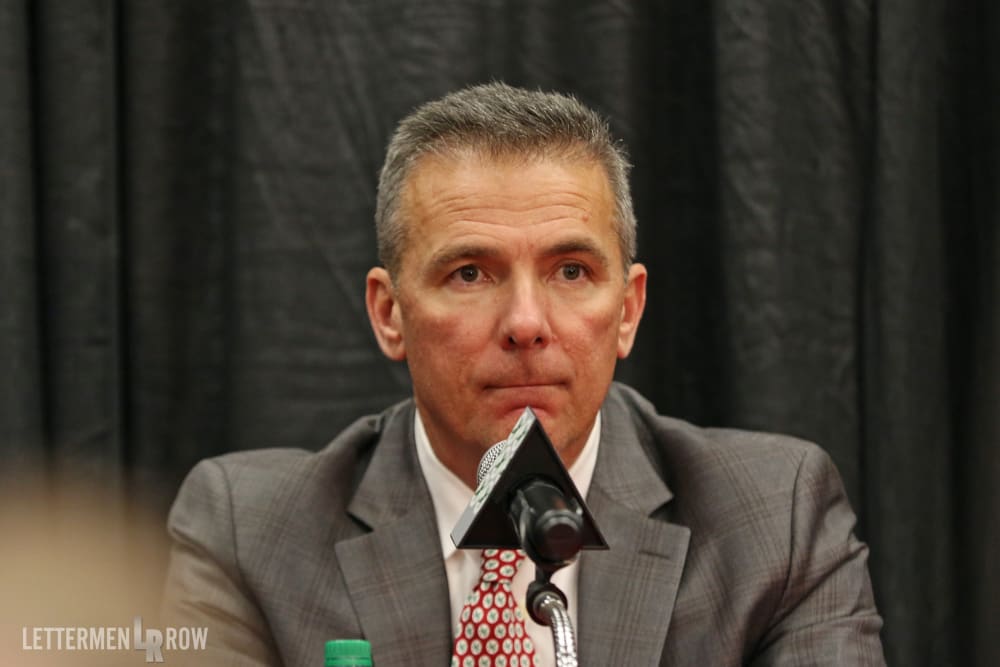 Urban Meyer is set for a new role in the Ohio State athletic department. (Birm/Lettermen Row)

It sounds like Urban Meyer is getting a new job title and role within the Ohio State athletic department, per a story from Doug Lesmerises of Cleveland.com.

Smith told cleveland.com that Meyer will hold the title of assistant athletic director, though he’s not yet sure of the specifics. He also explained how he might handle things if he feels Meyer is hanging around football in a way that could make life more difficult on new head coach Ryan Day.

I’m all for Meyer staying involved within the Ohio State athletics community as a whole, but it will be interesting to see what the dynamic is like as Ryan Day attempts to build his own program. I think Ohio State would be wise to avoid the situation in Wisconsin, where Barry Alvarez lords over everything and sent two otherwise successful coaches chasing vastly inferior jobs just to get away from him.

Well, it didn’t take very long for Tate Martell to weigh in with his thoughts on the possibility of Georgia quarterback Justin Fields transferring to Ohio State.

… especially not your second time

The Buckeyes could be closing in on their sixth commitment in the Class of 2020 when Sammamish (Wash.) Eastside Catholic receiver Gee Scott makes a decision in his recruitment on Christmas day.

A 6-foot-3, 210-pound receiver, Scott will make his commitment between Ohio State, Notre Dame and a few other finalists. He’s the country’s 15th-ranked receiver according to the 247Sports.com composite rankings and the 70th overall prospect in the Class of 2020. He’s been to Ohio State just once, but that visit in October has become the background to a very close-knit relationship he’s formed with Buckeyes receivers coach Brian Hartline since.

For the latest in Ohio State recruiting, check out Sunday’s edition of Dotting The ‘Eyes.

It’s never been a secret that Noah Potter’s decision to sign with the Buckeyes was motivated by the opportunity to work with one of the most legendary position coaches in college football. And the time to get started on a full-time basis has nearly arrived for Potter now that his signature has officially been delivered to Ohio State, putting him in line to become one of the next protectors of the rich tradition of the Rushmen.

It’s clear on film that Potter already has a good idea of how to use his skill set. Former Ohio State linebacker Zach Boren was in the Lettermen Row film lab breaking down what Noah Potter will bring to the program, and the potential for him to thrive is clear to see in the latest episode of BuckIQ.

Ohio State basketball picked up another neutral-site win on Saturday, beating UCLA by an 80-66 margin in Chicago as a part of the CBS Sports Classic. Lettermen Row contributor John Brice analyzed the Buckeyes’ victory with his Three Points postgame thoughts.