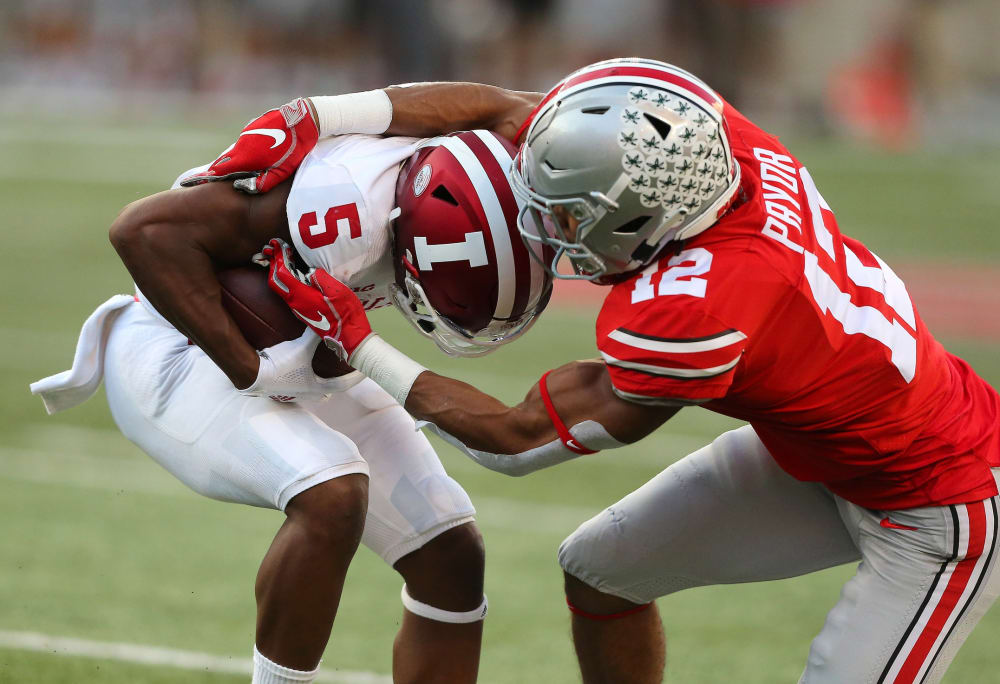 Urban Meyer spoke plainly on Saturday about what needs to change for Ohio State.

“That first half was awful,” Meyer said following Saturday night’s 49-26 win against Indiana. “A combination of poor pass rush and not blocking on your guys. …The big hits [through the air], and we’re a man coverage team.

“… We’ve been fine against the run, but the pass has been killing us and that’s going to bite us. Something we’ve got to get fixed.”

Ohio State still has time before facing Michigan State and Michigan in November, but the Buckeyes will only have so many opportunities to refine a pass defense that looks like the team’s Achilles heel at the moment.

Here’s our analysis from a sluggish victory over the Hoosiers:

Instant reaction from the win over Hoosiers

What we learned from inconsistency vs. Indiana

Which players earned our Buckeye Leaves

Wandale Robinson, a 4-star slot receiver from Frankfort (Ky.) Western Hills High School, showed up at Ohio State hours after another huge game on Friday night when he scored five touchdowns and amassed more than 400 total yards against Lexington Catholic. He was in town three weeks ago for the Sept. 8 matchup with Rutgers, but this visit was obviously much more detailed.

“It was just more in depth with everything,” Robinson told Lettermen Row. “All the meetings and talks with coaches were much more in-depth.”

His visit set the stage for a decision between Ohio State and Kentucky, which Lettermen Row recruiting czar Birm broke down in Sunday night’s Dotting The ‘Eyes.

How’s this for weird? Ohio State running back commit Sampson James visited for Ohio State’s win over Indiana… and flipped to the Hoosiers one day later. As Birm noted, this isn’t a situation where he was forced out and the Buckeyes staff was caught off guard when they found out, which makes this a major head scratcher.

As for the Buckeyes, they’ll have to turn their attention to other running backs in the 2019 class to fill a spot vacated by James.

Ohio State opened as a 31.5-point favorite against Minnesota. The Gophers haven’t beaten the Buckeyes since 2000 — during John Cooper’s last season in Columbus — and that doesn’t look like it will be changing this year.

Birm put together another great photo gallery from the win over Indiana so be sure to check that out.

Ohio State stayed at No. 3 in both the Coaches Poll and AP Top 25 after pulling away from Indiana on Saturday. The Buckeyes trail Alabama and Georgia in both rankings.

Continue Reading
You may also like...
Related Topics:Featured, wandale robinson