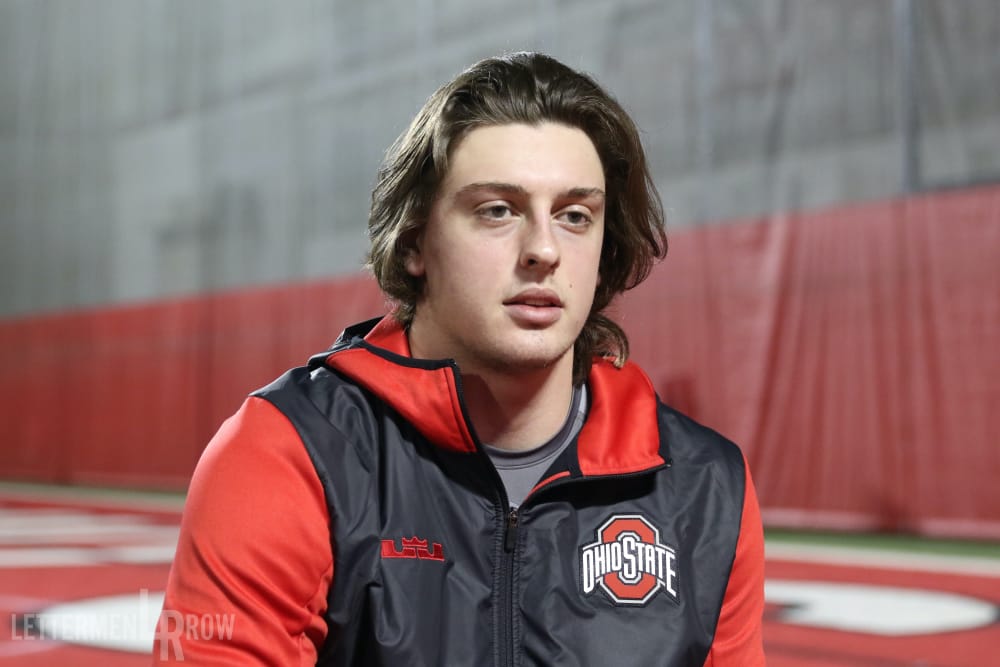 Ohio State defensive lineman Noah Potter said Larry Johnson was the key for him staying with the Buckeyes. (Birm/Lettermen Row)

Noah Potter wore the No. 97 at Mentor High School and his hair spills out the back of his helmet.

Whether a direct homage to Joey and Nick Bosa or a coincidence, it’s clear he hopes to become like those two All-Americans he watched and tries to emulate on the football field.

The best way for that to happen was to play for the coach that developed them. That’s why Potter picked Larry Johnson and Ohio State. It didn’t hurt that his brother Micah was an Ohio State basketball player during the entirety of his recruitment, though he certainly never tried to direct his younger brother to follow his footsteps to Columbus.

Lettermen Row director of recruiting Jeremy Birmingham looked back at Potter’s path to the Buckeyes, and how Johnson played a key role in his recruitment.

The era of the two-headed monster at Ohio State made up of J.K. Dobbins and Mike Weber is no more.

Dobbins, the yards leader on the ground last season for the Buckeyes, is returning for his junior season while Weber and nine other former Buckeyes will have the NFL Combine this week and their pro day to give teams one last look at their skills before the NFL Draft in April. The transition to the NFL for Weber could be an easy one with his skills. But with some fumbling and health issues troubling him at times, some teams may be hesitant on selecting him early in the draft.

Where will he go then? Lettermen Row is looking at a few reasons why no matter where he ends up, Weber is a strong selection for any franchise to rely on.

The new coaching staff at Ohio State obliged a social media request by Trinity Christian School (Cedar Hill, Texas) defensive back Dwight McGlothern two months back, getting in contact with the country’s seventh-ranked cornerback after months of sparse communication.

“Coach Day and [receivers coach Brian] Hartline both reached out,” McGlothern told Lettermen Row at the time. “They apologized for me not being recruited hard and said they don’t chase kids. So if I’m interested in them, they’re interested.”

The 6-foot-2, 180-pound star remains interested, and it seems Ohio State does as well. The two sides have stayed in regular contact since that early January effort, but the conversations have been turned over to two new Buckeyes assistants.

For a full recruiting update from the weekend, check out Sunday’s edition of Dotting the ‘Eyes.

Upset bid for men’s hoops comes up short at Maryland

The breakthrough win didn’t materialize. But if Ohio State keeps putting itself in position to claim one, sooner or later it figures to come.

Despite being shorthanded on Saturday and then facing a sizable second-half deficit on the road against a ranked opponent, the Buckeyes still put together a performance that made them a real threat to knock off Maryland.

That didn’t happen down the stretch, and eventually the Buckeyes dropped a 72-62 decision to the Terrapins. But the way the program is fighting, they’re continuing to look like a possible NCAA Tournament team as the opportunities for a resumé-boosting win continue to dwindle.

What does that outing suggest about the Buckeyes moving forward? Lettermen Row is breaking it down with Three Points.

How much work does Ohio State basketball have left for an NCAA Tournament berth?

A week after looking at Ohio State’s NCAA Tournament path, the Buckeyes are in about the same position but with three fewer games to work with.

As is fitting with this team, there was some good news and bad news. The good news is that the Buckeyes managed to beat Northwestern, avoiding a crippling loss that would have sunk their postseason hopes. The bad news is that they lost to No. 11 Michigan State and at No. 24 Maryland, depriving them of the type of victory that would make them feel a lot better about their selection odds.

The Buckeyes now have four games left to improve their resume, or else they’ll have to head to the Big Ten Tournament with their postseason fate on the line.

How much work is left? Lettermen Row’s Ryan Ginn sees what Ohio State must do to make their way to the NCAA Tournament.

Ohio State men’s hockey defeated Michigan on the road over the weekend to claim the program’s first Big Ten regular-season title since winning the inaugural CCHA tournament during the 1971-72 season. Captain Mason Jobst netted the game-winning goal in double overtime on a 3v3 to capture the crown in dramatic fashion, and Ohio State now returns home for one final series with Michigan State next weekend before the conference tournament begins.