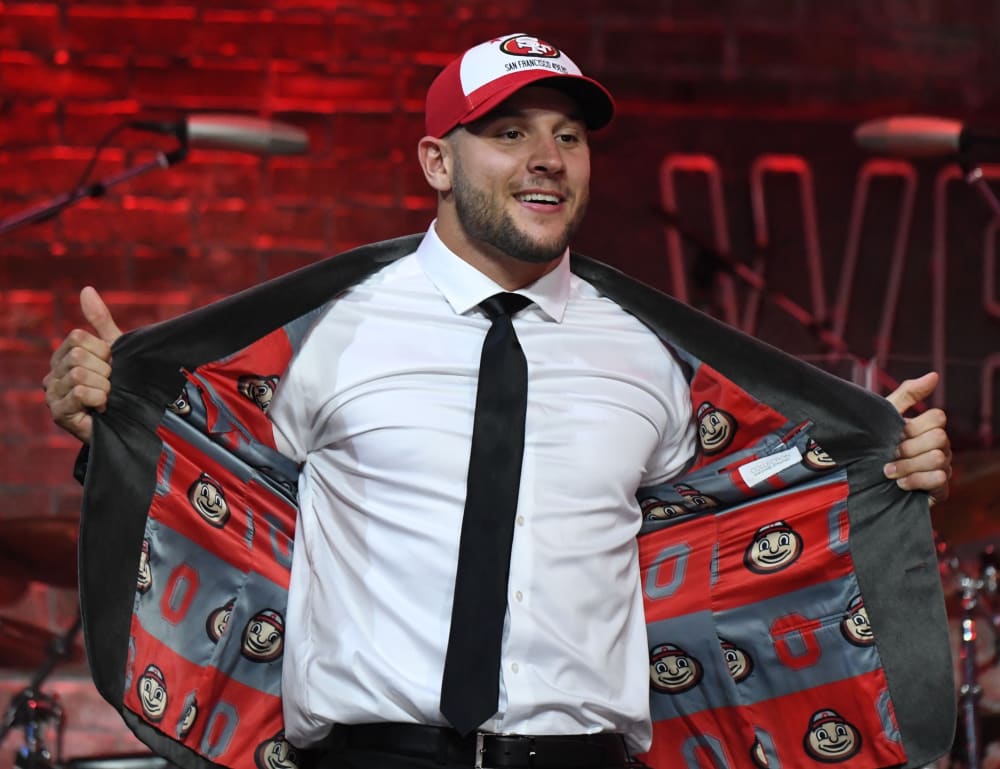 Two Buckeyes drafted in first round

Ohio State had two players selected in the first round of the 2019 NFL Draft on Thursday. Defensive end Nick Bosa got things started when he came off the board at No. 2 overall to the San Francisco 49ers. He was joined by quarterback Dwayne Haskins, who was taken by the Washington Redskins with the No. 15 overall selection.

Both players went to teams that had been seen as likely destinations. Bosa has been projected to the No. 2 spot ever since the Cardinals hired Kliff Kingsbury and fell in love with Kyler Murray, while Washington showed significant interest in Haskins throughout the process. Redskins owner Daniel Snyder has a son who went to high school with Haskins, and Haskins’ interview was the only draft prospect interview at the NFL Combine that Snyder personally observed.

Ohio State moves to No. 1 in most first-round picks

With the selections of Bosa and Haskins, Ohio State officially moved into a tie with USC for the most ever first-round picks produced by a college with 81. Given the talent level of both teams at the moment, it seems all but assured that at some point in the near future Ohio State will assume the outright lead in that category and break USC’s decades-long strangehold on that accomplishment.

Which Buckeyes are up next in 2019 NFL Draft?

Day Two of the 2019 NFL Draft could be a big one for Ohio State, with several prospects seemingly poised to be selected in the second or third round. Here’s a list at where Ohio State players rank in ESPN draft analyst Mel Kiper’s Best Available Players list:

If three of those players are taken over the next 68 selections, it would make four years in a row that Ohio State has had at least five players selected within the first 100 picks. Alabama is the only other team to have an active streak of the same length. Miami (Fla.) holds the current record of six years, which was set between 2001-06.

Over the course of the past three months, there’s been discussion about a number of different potential 2021 quarterback options for Ohio State, from J.J. McCarthy and Kyle McCord to Jake Garcia and Drake Maye. One name not mentioned much is Canisius (Buffalo) quarterback Christian Veilleux, who originally hails from Ontario, Canada.

The 6-foot-4, 190-pound quarterback was the positional MVP of The Opening regional in Massillon in late April. He has nine early offers, including one from Michigan. Next season Veilleux is moving to Maryland and will play his junior season at The Bullis School in Potomac, the alma mater of Dwayne Haskins. It’s that upcoming connection to Haskins, and the way Day and the Buckeyes helped develop him, that has Veilleux hoping for Ohio State to look at him in the 2021 class.

“My trainer was there at Ohio State a few weekends ago,” Veilleux told Lettermen Row. “They asked about me, but I have not been in contact with the coaches yet. It’s just a big-time program and their reputation really sparks my interest.”

For more information on Ohio State recruiting, check out the Thursday edition of Dotting the ‘Eyes.

This week on Lettermen Live presented by Byers Auto, former Columbus Dispatch beat reporter Tim May joins Beanie Wells and Austin Ward to discuss an interesting week for Ohio State football. The big topic is Matthew Baldwin’s decision to enter his name in the transfer portal. Plus, Birm joins to discuss the latest on the recruiting front including potential quarterback transfer targets.

Teague certainly looked at home in the Horseshoe when spring camp ended for the Buckeyes, turning his seven carries into a game-high 75 yards with a pair of touchdowns. And while those scrimmage stats can often be misleading when there isn’t any live tackling going on, the burst Teague showed on the way to the end zone on a 22-yard score in the third quarter was a reminder of why Ohio State made the effort to head down to Tennessee to recruit him.

What does that mean for Master Teague moving forward? Are changes in his game already evident to the trained eye? What gives the Buckeyes confidence that he can be a difference-maker for the rushing attack? Former Ohio State and NFL running back Beanie Wells was back in the Lettermen Row film lab breaking down that spring-game outing for Teague in the latest episode of BuckIQ.