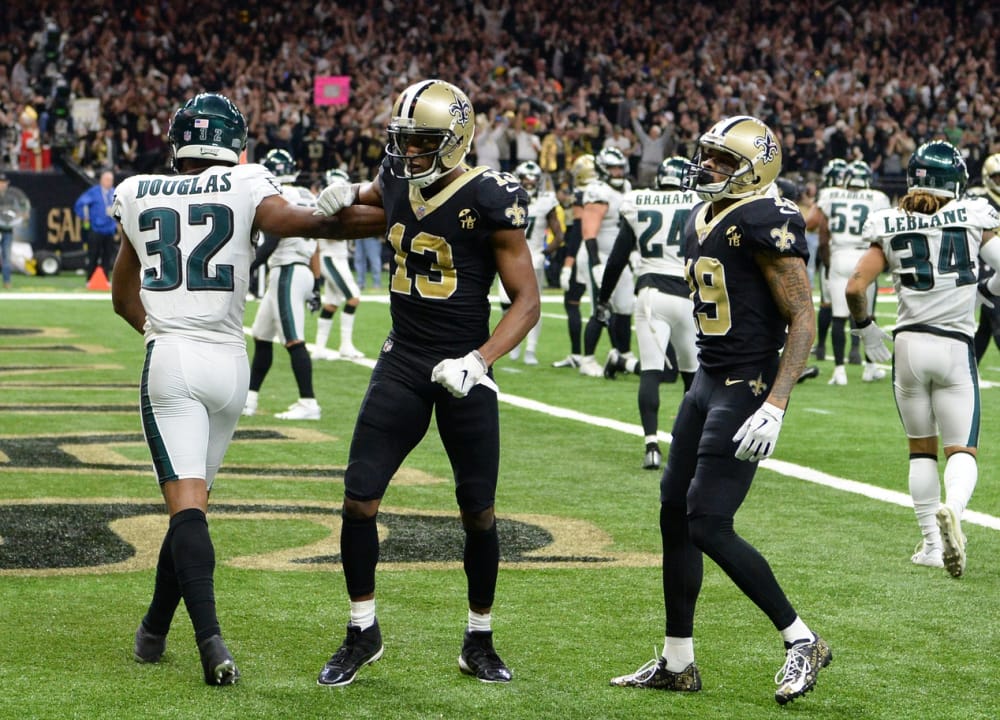 There are six former Ohio State players on the New Orleans Saints, making New Orleans by far the most Buckeye-heavy team in the NFL. Those former Buckeyes were at it again on Sunday, helping to carry the No. 1 seed Saints to a spot in the NFC Championship by beating the Philadelphia Eagles, 20-14.

The game was sealed when cornerback Marshon Lattimore made his second interception of the day, picking off Nick Foles just after the two-minute warning to thwart the Eagles’ potential game-winning drive. Offensively, the top two receivers were Michael Thomas (12 catches for 171 yards and a touchdown) and Ted Ginn (three catches for 44 yards). Lattimore, Vonn Bell and Eli Apple finished second on the team with four tackles apiece, and each broke up at least one pass.

The planned official visit to Ohio State this weekend for Indianapolis 3-star offensive lineman Dawand Jones did not happen. The country’s 88th-ranked offensive tackle had told Lettermen Row on Thursday night he was trekking to Columbus, but inclement weather changed his mind.

“We didn’t end up going,” Jones told Lettermen Row on Sunday morning. “We are going to go Martin Luther King weekend instead. The weather was supposed to be bad, so we rescheduled.”

Had the 6-foot-8, 360-pound Jones visited this weekend, he’d likely have been the only visitor on campus. While that allows the coaching staff a unique opportunity to spend a lot of quality time with him, it wouldn’t provide the rising prospect a chance to get familiarized with the guys he could end up playing alongside in college. Showing up next weekend, when Harry Miller and Doug Nester will be in town and with Ryan Jacoby already enrolled with Ohio State, is a better chance to get to know his peers.

For full recruiting coverage, check out Sunday’s edition of Dotting the ‘Eyes.

Ohio State basketball dropped its third game in a row for the first time in the Chris Holtmann era, losing to Iowa by a 72-62 margin. Lettermen Row contributor John Brice broke down the loss in his Three Points post.

There is no secret about who Ohio State will rely on most if it’s going to make another run to the NCAA Tournament. That can be a lot of pressure for a still-developing player. But Kaleb Wesson has already shown he can handle the job, as Terence Dials breaks down in his first visit to Lettermen Row for a BuckIQ breakdown of the big man. The former Ohio State standout popped in the film from the last couple games for the Buckeyes to see what Wesson is providing — and how he can be a difference-maker against Iowa.