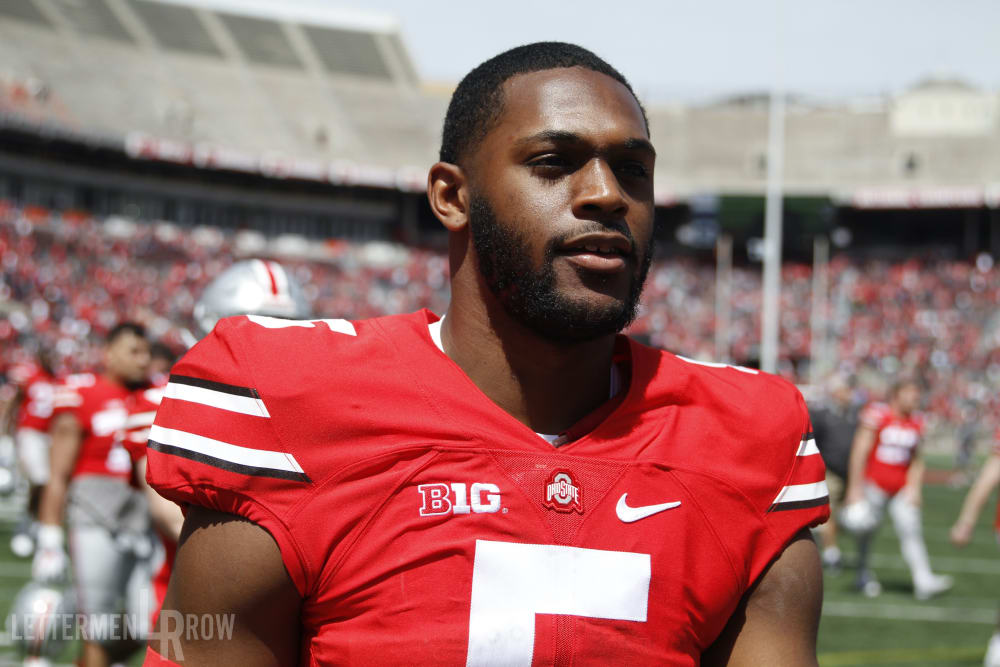 Baron Browning is an X-factor for the Ohio State linebackers. (Birm/Lettermen Row)

Al Washington has a room full of talented players, and he’s on record that playing last year doesn’t matter when it comes to this season. So, Washington will have to decide whether to stick with Malik Harrison, Pete Werner and captain Tuf Borland — or go with younger guys who are itching for playing time?

Harrison will likely gather preseason awards. But beyond that, the Buckeyes have a lot of unanswered questions. It’s Linebackers Week at Lettermen Row, and we have five burning questions for how things might shake out for one of the Buckeyes most important position.

The country’s third-ranked 2021 cornerback, Virginia’s Tony Grimes, was in Columbus on Saturday and had a tremendous visit to the school — despite an incident with a deer that almost kept him from making the trip. It’s a good thing for the Buckeyes that it didn’t. This first trip to Ohio State, one spent with fellow Virginia Beach native Teradja Mitchell, was a big success for Day’s program.

“It was an amazing big time,” the 6-foot, 180-pound rising-junior told Lettermen Row. “The facility was good, and it wasn’t like the other ones I’ve seen. That was amazing, out of this world. But the one thing they did have that was better than most colleges I’ve been too was the coaching staff. They were big time.”

Grimes has offers from the country’s best and biggest programs. He’s at least a year away from a college decision, but there’s no doubt that Ohio State made a big move in his mind.

“Everything there was great — but again, it’s the coaching staff,” Grimes said. “[Co-defensive coordinator Jeff] Hafley and Coach Day were just different.”

Ohio State’s linebackers are in an interesting spot. The unit brings back a handful of contributors, but the group didn’t fare that well last year. And to add more uncertainty to the mix, there’s also a new position coach as Al Washington replaces Billy Davis. With a mix of veterans and young up-and-comers, there are a lot of different ways this could end up shaking out.

The Monday question of the day brought up part of that debate by asking about Teradja Mitchell’s potential playing time in 2019. Here’s what Lettermen Row senior writer Austin Ward had to say:

His athleticism, his confidence and his potential all point to a linebacker who must be on the field for the Buckeyes this season in some capacity beyond just blowing up plays on special teams like he did as a true freshman.

At a minimum, Ohio State figures to insert Mitchell into the rotation this season given the way he’s come on after a year of development. And while the comparison isn’t perfect, the Buckeyes have seen how the combination of an experienced senior sharing the workload with a rising star to quarterback the defense can work when it deployed both Curtis Grant and Raekwon McMillan a few years ago.

Or perhaps Mitchell will build a case in August that he’s just too good to ever take off the field and he’ll cement himself in the middle. At this point, it’s still hard to know for sure how the snap count will work for the Buckeyes, because the linebackers will also be impacted by the new Bullet position, which also changes the math for Mitchell and the rest of the unit. But even with all that uncertainty, Mitchell at least made it abundantly clear in March and April that Ohio State can’t afford to leave him on the sideline this fall.

One expected 2020 official visitor for the huge upcoming weekend in Columbus won’t be making the trip after committing to Notre Dame on Sunday night.

Michael Carmody, a top target for the Buckeyes on the offensive line, picked Notre Dame and ended what had been a few weeks worth of speculation about his ultimate destination. The 6-foot-6, 280-pound lineman followed in his brother’s footsteps and chose Notre Dame over Ohio State, Texas A&M, Texas and others. He will no longer make his planned official visit to Ohio State.