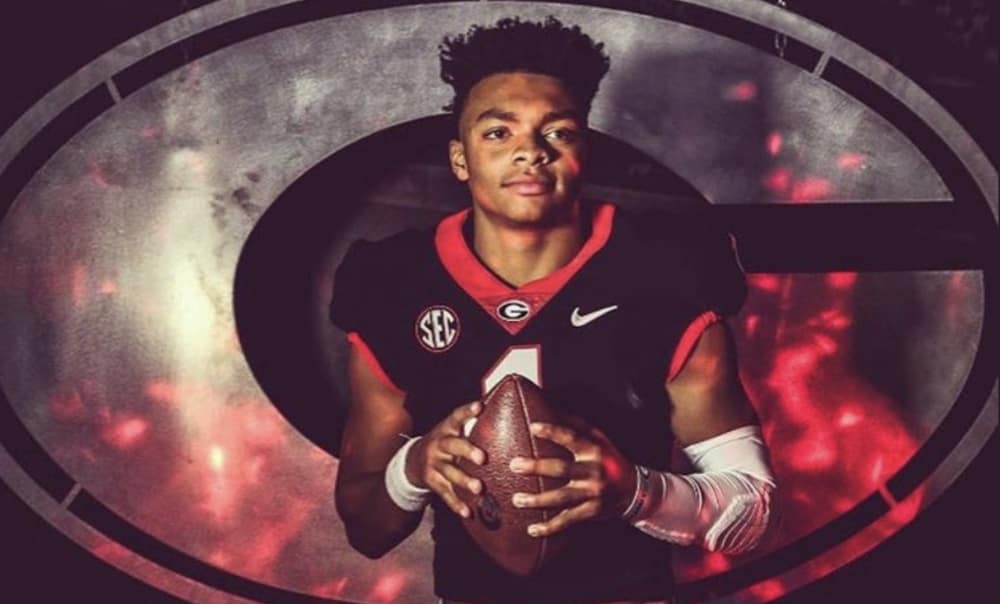 Justin Fields is reportedly planning to transfer from Georgia. (Photo via @justnfields on Twitter)

News broke Monday from Dan Wolken of USA Today that former 5-star quarterback Justin Fields intends to transfer from Georgia. Later that day, ESPN reported that Ohio State, Oklahoma and Florida State would be among the schools considered if a transfer does indeed happen.

It’s obvious why this is big news, but let’s go through the obvious anyways. Fields was the No. 2 overall prospect in the Class of 2018. He signed with Georgia but never carved out much of a role this year playing behind sophomore Jake Fromm. Even in a 20-point loss to LSU in which Fromm looked horrible, Kirby Smart didn’t give Fields a series.

Fields would theoretically have to sit out the 2019 season if he transfers, but he’s expected to appeal for immediate eligibility and Wolken suggested that the racist remarks targeted at him this fall could serve as the foundation of an appeal a transfer waiver that would make him eligible next season.

Ohio State will almost certainly be without Dwayne Haskins, and adding another quarterback to the room could bolster its depth if Haskins indeed makes it three quarterbacks departing in a two-year span (along with J.T. Barrett and Joe Burrow). However, it could come at a cost. It’s likely that Fields would choose somewhere he feels (or is told) he’d start, and you can bet this addition would draw the attention of Tate Martell. But Fields is a prodigious talent, and it’s something Ohio State will have to evaluate if he does indeed transfer and has interest in the Buckeyes.

The Buckeyes have not offered, but the 6-foot-5, 185-pound sophomore-to-be is putting himself in a good position after making his second visit since October. As a 2022 prospect, there’s been limited contact since that trip for the Minnesota game on Oct. 13.

“Not much [discussion] until this week,” Allen told Lettermen Row. ” That’s why they wanted to get me up there for practice.

“Coach Day just said he wanted to start to build a relationship and get to know me better.”

For more on Ohio State recruiting, check out the latest edition of Dotting the ‘Eyes.

Hoops team back in action

After a narrow win against Bucknell, Ohio State basketball returns to action Tuesday night against Youngstown State. Tipoff is at 7 p.m. ET and will be televised by the Big Ten Network.

Ohio State basketball remained No. 15 in the latest AP Top 25 released Monday. The Buckeyes played just one game over the past week, a 73-71 win over Bucknell.

Check out Bend for Bros event

Bend Active, home of the hottest women’s Buckeye apparel, has the ideal way to combine holiday shopping, Ohio State fandom and some free food and beverages. Plus, anybody picking up a new gift will have a chance to meet and get a signature from former Buckeyes safety Mike Doss just to sweeten the deal.

The Bend for Bros event in Upper Arlington is scheduled for Thursday night at 7, and it will include catering from Roosters, a beer tasting, a giveaway from the 97.1 The Fan’s Football toss — and an easy way to wrap up some shopping with officially-branded Ohio State gear. And there might just be some Lettermen Row swag on hand as well.

Reservations are recommended, and more information is available on the event page.