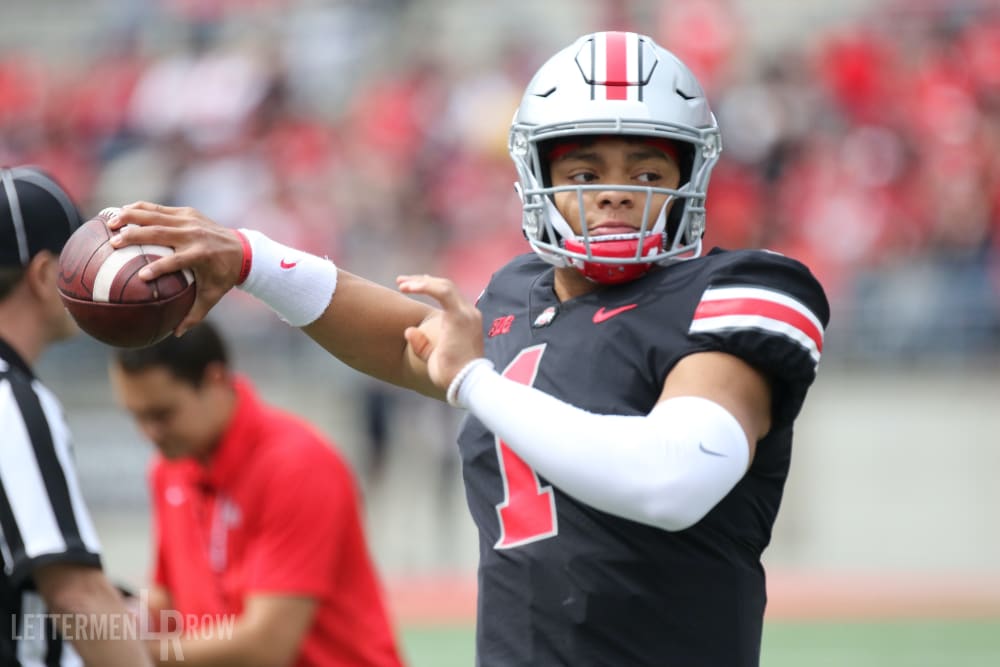 Justin Fields still has a lot to prove. (Birm/Lettermen Row)

Even for a quarterback with physical gifts like Justin Fields has, there’s always a learning curve at such an important position. But the signs that Fields has the potential to be special for Ohio State are starting to pop up, whether in just a limited sample size in an exhibition or the way he’s carried himself with teammates during offseason workouts that reflect his willingness to become a leader.

The full package wasn’t on display in April, and it was hard to get much of a read on a guy who only attempted 13 passes and also wasn’t allowed to be tackled when he was a rusher. Maybe that was by design as Ohio State kept Fields under wraps, maybe it was just the way the scrimmage flowed.

Either way, the first time in the Horseshoe for Justin Fields provided at least a glimpse at his talent and what he brings to Ohio State. Former Buckeyes quarterback and national champion Cardale Jones returned to the Lettermen Row film lab to break down that performance for Fields and look ahead at the next phase in the development process in the latest episode of BuckIQ.

In Scarlet Sunrise on Wednesday, we included a story from Birm that intimated that Ohio State’s 2020 class would end up right at 25 players. Here’s an update on that situation from Birm:

On Thursday morning, I received a message from another source close to the Buckeyes. That source indicated that after further review, there was still some chance the class is bigger than 25 after some internal discussions. How does the number go above 25? How far above can it go? That’s still apparently going to require some sorting out.

One source said: “It’s complicated.” But just know that the hard cap of 25 appears to no longer be an issue.

Luke Lachey camped at Ohio State this summer in the hopes of earning a scholarship, but at the end of the day the offer went to Joe Royer. Last week, Royer made things official by committing to the Buckeyes.

With no spot at Ohio State, Lachey instead committed to Iowa. That’s a big win for the Buckeyes if he happens to be a productive college player. With Michigan State long assumed as Lachey’s second choice, his selection of Iowa means he won’t face the Buckeyes on a yearly basis.