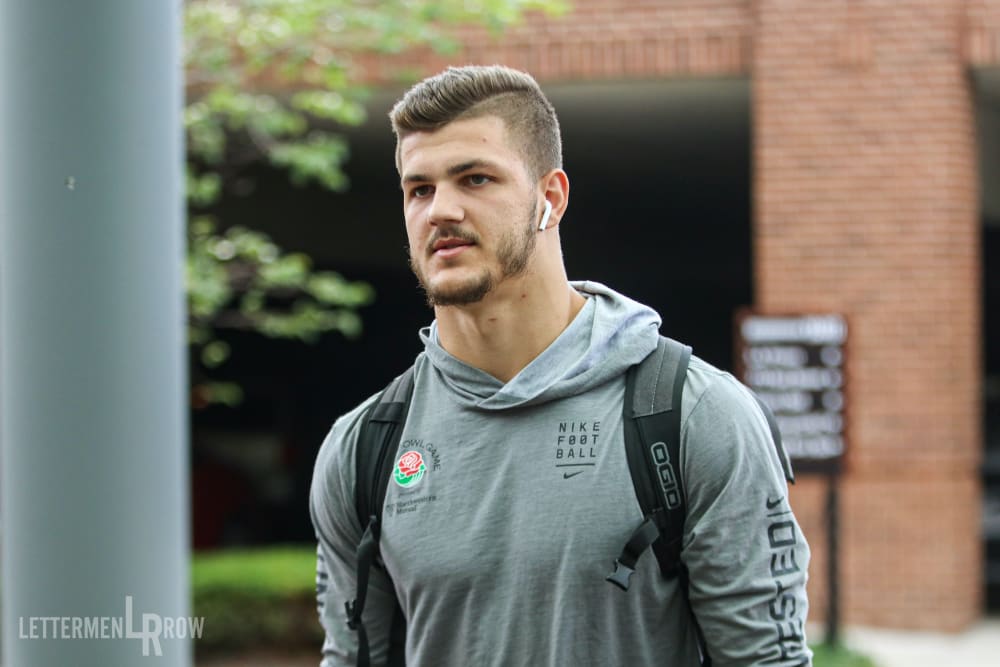 Jeremy Ruckert could make a second-year leap in 2019. (Birm/Lettermen Row)

The Buckeyes are well aware of the potential with Jeremy Ruckert’s physical tools, and the coaching staff has made it no secret that he has the most upside among the tight ends. But that’s also a deep unit with a couple of returning veterans on the depth chart either ahead of or alongside Ruckert, so nothing is guaranteed at this point of training camp when it comes to playing time. But with the sophomore ready to join Luke Farrell and Rashod Berry in the lineup, the Buckeyes have started toying with more two-tight end sets — and might also carve out more unique roles for a guy with Ruckert’s ability as a receiver.

Will Jeremy Ruckert get work as an H-back? How big will the jump be for a tight end going from his first season to his second at Ohio State? What are reasonable expectations for Ruckert as a sophomore? Former Buckeyes tight end Jake Stoneburner was back in the Lettermen Row film lab looking at areas where Ruckert has already improved as he projects the next step on BuckIQ.

The Class of 2021’s top-ranked all-purpose running back, Will Shipley, doesn’t live too far down the road from where Christian McCaffrey plays his NFL football — fitting, because he’s a player with a lot of similarities to the 5-star talent.

A 5-foot-11, 200-pound athlete, Shipley lines up at running back for Matthews (N.C.) Weddington High School. But his future — especially if it happens to be at Ohio State — is more likely as a slot receiver-type of player, similar to McCaffrey and former Buckeyes star Curtis Samuel, who also happens to line up alongside him for the Carolina Panthers.

As a sophomore, Shipley scored 25 touchdowns and ran for more than 1,400 yards on just about 200 carries. He also ran a 4.46 at an April regional camp for The Opening. He may not follow the norm or do what his peers do, but the dynamic playmaker is what every school in the country will be looking for on the field. Right now, though, he’s not allowing himself to be too caught up in any one school.

“There are no schools sticking out yet,” Shipley said. “I’m going to focus on that more after the season. It’s going to be about a place with a family environment, about relationships.”

For more on Shipley, check out the Thursday edition of Dotting the ‘Eyes.

When asked about the Bullet position and its core purpose on Wednesday, defensive coordinator Greg Mattison, who spurned Michigan for Ohio State early in the offseason, gave the media a better idea of what the Bullet will look like.

“We have a [strong-side] linebacker who is very, very athletic and very, very fast,” Mattison said. “The Bullet position ends up being a way for us to have great depth at the Sam position. You can have them, they can be interchangeable. The Bullet position has been very good for us, gives us a lot more flexibility to be able to play a lot more positions.”