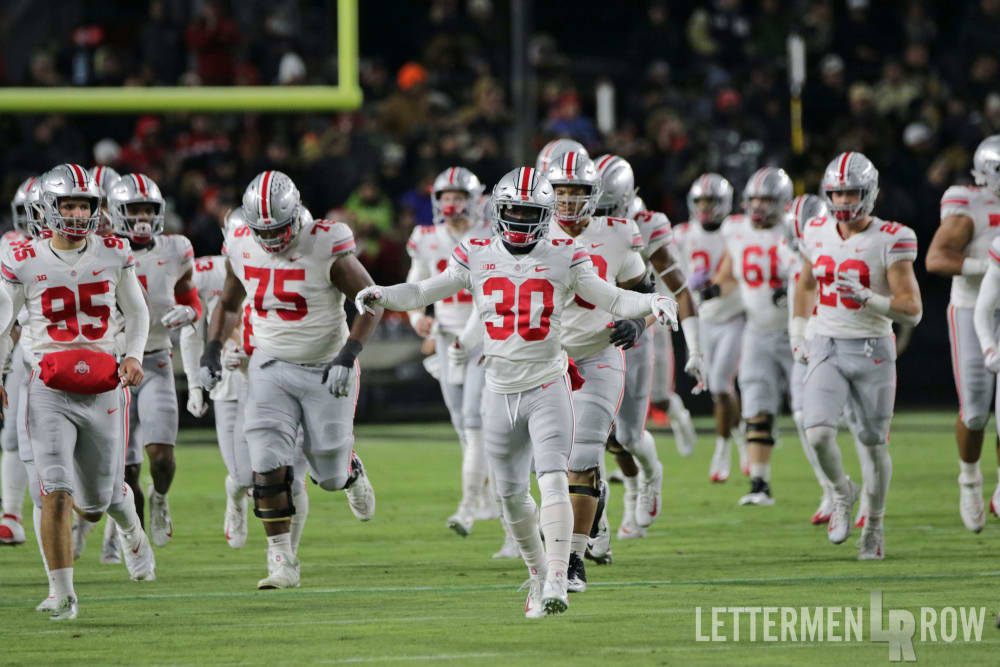 Ohio State will need to improve to win out, but a playoff bid is still possible. (Birm/Lettermen Row)

Despite the loss to Purdue, Ohio State is still a playoff contender in the eyes of most analysts. While many have switched the Big Ten playoff team to Michigan in projections, USA Today still has the Buckeyes facing off against Alabama in a No. 1 vs. No. 4 matchup.

Here’s what USA Today had to say about Ohio State’s place in its latest College Football Playoff projection:

Sometimes a loss changes everything. Sometimes it changes very little.The latter is the case for Ohio State. Yes, the Buckeyes were shocked at Purdue, but their outlook still remains the same: Take care of business in three manageable contests to set up a winner-take-all showdown with Michigan in the Big Ten East.

The matchup with the Wolverines takes place in Columbus, and Ohio State still rates as the favorite. Michigan last won in Columbus in 2000.  A victory against their rival sets the Buckeyes up to reach the College Football Playoff by winning the ensuing conference championship game. In last year’s playoff, all four teams had one loss.

Ohio State has obviously not been great in the red zone late, but a look at the numbers from Lettermen Row contributor John Brice revealed just how much work the Buckeyes have left to do:

A deeper dive into the Ohio State red-zone offense this year revealed the unit already has failed to score more times inside opponents’ 20-yard lines (nine through eight games) than it did throughout the entire 14-game 2017 campaign, when it scored on 61 of 68 trips.

Those red-zone impediments have been compounded by the aforementioned struggles in the running game. After 25 red-zone rushing touchdowns a year ago, the Buckeyes have mustered just 10 through eight games.

Moreover, in a Big Ten championship season that culminated with a win in the Cotton Bowl, the Buckeyes closed the year ranked 23rd nationally in red-zone scoring. They’ve plummeted to No. 116 two-thirds of the way through this season.

What exactly is weighing down Ohio State’s rushing attack? Are the signs still there that Mike Weber and J.K. Dobbins can continue to get the job done and get the Buckeyes back on track? That’s a big question that the Buckeyes will have to figure out. Former Ohio State star rusher Beanie Wells returned to the Lettermen Row film lab for a BuckIQ breakdown of the rushing attack, offering his analysis on where the offense can go down the stretch after the off date.

Ohio State wide receivers coach Brian Hartline made a visit to see Julian Fleming, a 5-star 2020 prospect viewed as the country’s No. 1-ranked receiver in that class.

“He was just here,” Fleming shared with Lettermen Row on Thursday afternoon. “It went well. He’s a great guy with a lot of knowledge and he knows how to make it to the NFL. We have developed a great relationship. His message is pretty similar to other coaches, it’s just ‘stay humble, work hard.’”

Fleming (6-2, 205), a star at Catawissa (Pa.) Southern Columbia, is predicted by every single “crystal ball” on the 247Sports.com network to pick Penn State for college. He says that while he’s familiar with Penn State, he believes most of that assumption is just based on how close they are to home for him but that he’s not really dialed in that much on any specific school at the moment.