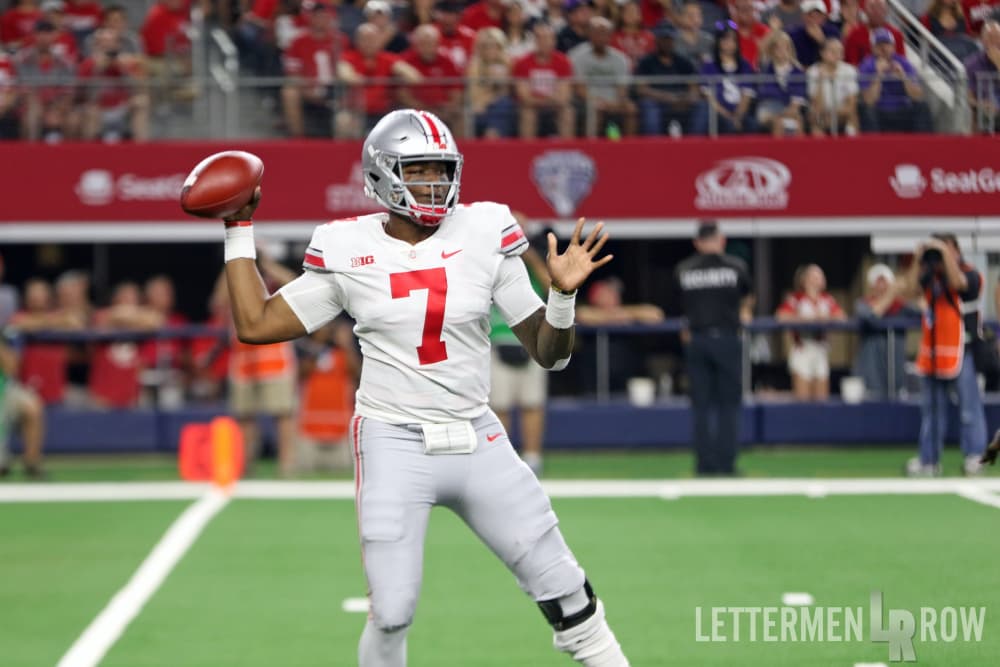 Ohio State has room to grow

Three weeks into the season, Alabama looks like a machine. Ohio State unquestionably looks better than its 2017 form and seems a good bet to make the College Football Playoff, but the Buckeyes still have some holes to fix in order to become a bonafide championship contender.

The good news for the Buckeyes is that quarterback Dwayne Haskins believes they can elevate their play to get into that conversation.

“I feel like we can keep getting better,” Haskins said. “We’re not really in playoff form yet, but we’re getting there. Execution is the biggest thing with the offense and timing. We had some times in the game last week where we didn’t execute the way it needed to be and that messed up the timing.

“If we can get the ball rolling from the start, we can do some things.”

If you need a loan anytime soon, there are worse people to ask than Ryan Day. In addition to his base salary, the Ohio State assistant received a lump-sum payment of $487,000 from his three-game stint as Ohio State’s acting head coach.

It was money well spent, as Day piloted the Buckeyes to a 3-0 start that included a 12-point win over TCU in Arlington. Plus, it never hurts to have that in the back of his mind when other teams come calling this winter.

Although he’s just a high school sophomore, Jack Sawyer — a Pickerington (Ohio) North defensive end who projects to be one of the elite recruits in the 2021 recruiting class — is a name worth knowing on the recruiting trail.

On Saturday, Sawyer will be back at Ohio Stadium for another visit — a key development since coaches have restricted communication with recruits until their junior season but can talk to them on visits.

“When I go to games like this I really watch the defensive line the whole time,” Sawyer said. “But, seeing how big and loud the crowd gets in the stadium is pretty sweet, too.”

“The most important thing though will probably be just getting another opportunity to spend time with the coaching staff and see everyone.”

Former Ohio State linebacker Zach Boren was back in the film lab for a BuckIQ that broke down both the highs and lows from the trip down to Texas. There are certainly some lingering issues that have carried over from the opener, and obviously the Buckeyes also put some special stuff on film that offers a clear reminder of the enormous upside for the Silver Bullets. Boren nailed his analysis of what happened on TCU’s long touchdown run, so be sure to check it out.

After two weeks on the New Orleans Saints practice squad, former Ohio State quarterback J.T. Barrett will be looking for a new job. The Saints released Barrett on Wednesday to make room for linebacker Darnell Sankey on the practice squad.

Cade Stover’s weekly journal at Lettermen Row is back for another edition, and this one doesn’t disappoint. I can confidently say he works harder in one day than I have in my life. Here’s how he described his most recent weekend:

My favorite part of the weekend was after we finished hauling, we decided to go cut and split some wood. This is something my dad and I absolutely love doing. Even though he doesn’t let me run the chainsaw much, I make up for it splitting the wood. We pull our old flatbed truck down by the tree. Dad cuts, I pick up and throw the logs on the back of the truck. Once the truck is full we drive it back up to the barn. That’s where then we get the maul out and where the fun begins.

We don’t have an automatic-log splitter. Dad and I set up all the wood and start swinging, making fun of whoever doesn’t cut clean through on the first swing. Only downfall to the process is the horrible blood blister you get in your hands after you are done, but it’s worth it just to spend that time getting work done with my dad.