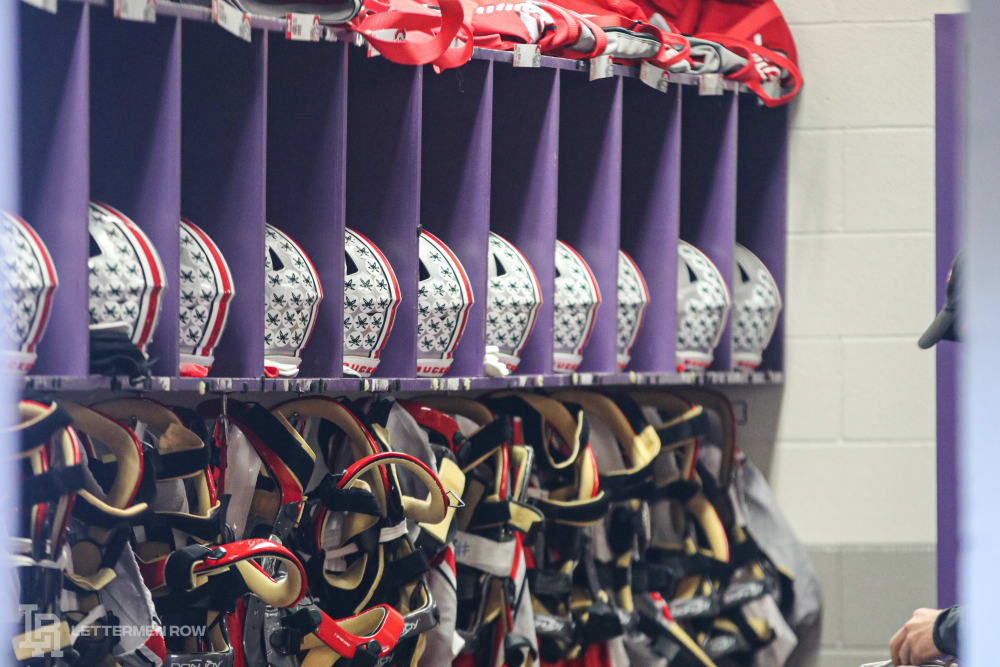 Ohio State has no positive tests for coronavirus. (Birm/Lettermen Row)

Ohio State seemed to be ahead of the curve when it canceled all recruiting activity early on during this coronavirus pandemic. The rest of the college football world followed suit. The entire state of Ohio has been praised for its handling of the current health crisis, and the Buckeyes deserve some credit, too.

Ohio State football coach Ryan Day met with the media through a teleconference Wednesday, when he confirmed to the media that there are no current positive COVID-19 tests within the football program, a good sign that the Buckeyes are doing their part to flatten the curve and stay ahead of the concerns surrounding the virus.

“That’s one of those things where we all know that the testing part of it is taking time and everything like that,” Day said. “But there’s nobody in our family right now that we know of that has tested positive.”

The Buckeyes will continue to monitor their players and staff members as the coronavirus continues to have an impact on the country as a whole and the college football community. For now, the Buckeyes have stayed healthy, and they’ll attempt to continue that.

That’s just one of the few things Day touched on when he spoke to the media on a conference call Wednesday afternoon. Lettermen Row senior writer Austin Ward broke down everything we learned from Day. Check that out here.

Ohio State is on a historic pace for its 2021 recruiting class. The Buckeyes currently sit as the No. 1 class in America. They have more commitments than any other program. They have top-end talent at every position in the class.

The Buckeyes already have two elite offensive linemen committed, and they’re trying to add to their treasure trove of interior weapons. Earlier this week, North Carolina 3-star offensive lineman Jared Wilson released a top-eight schools list that did not include Ohio State. The reason the Buckeyes weren’t on his list was because they hadn’t offered him a scholarship yet.

That changed on Tuesday evening when Ohio State extended an offer to the interior lineman, and now the Buckeyes are going to continue growing their relationship with the 6-foot-4, 325-pound Wilson.

For all the critique that comes from the outside about Tuf Borland and Pete Werner, the Buckeyes aren’t too worried about the linebacker situation.

Borland will likely be a three-time captain when the Buckeyes return to work — whenever that may be. Werner will be one of the cornerstones of the Silver Bullets defense. The pair have faced criticism during their entire Ohio State careers, but the Buckeyes know what they have in both talented linebackers.

Why is Tuf Borland so important to Ohio State? Is his athleticism perhaps underrated as he heads into his final season with the Buckeyes? What can the program do with him during his final season in Columbus? Former Ohio State linebacker Anthony Schlegel made his debut in the virtual film lab to answer those questions in the latest episode of BuckIQ.

Borland would be a great Wisconsin type LB. Typical Big Ten MLB run-plug against an I-formation. But he’s the JTB of the defense. They have to develop the high-ceiling guys behind him and play him in limited duties. Not as a starter. I realize this will never happen.

Another guy who knows more than the coaches.

He is just slow. Tuf has the best instincts of all of the players OSU’s LB core.

so if people without symptoms aren’t supposed to get tested how do they know nobody on the team tested positive …or do they get special treatment as we common citizens are ordered otherwise ??

No symptoms so no one was tested.

The whole controversy over the lack of testing makes no sense to me. Unless you are struggling to breathe or in the high-risk group you’re going to do the same thing you would if you had the flu or a cold. Stay home, drink fluids, take meds to reduce a fever.

How can the whole team get tested when the public can’t? those at high risk such as health care workers who have been in contact with COVID-19 patients; symptomatic people in areas with high infection rates; and people 65 years of age and older with chronic health issues, such as heart disease, lung disease or diabetes.