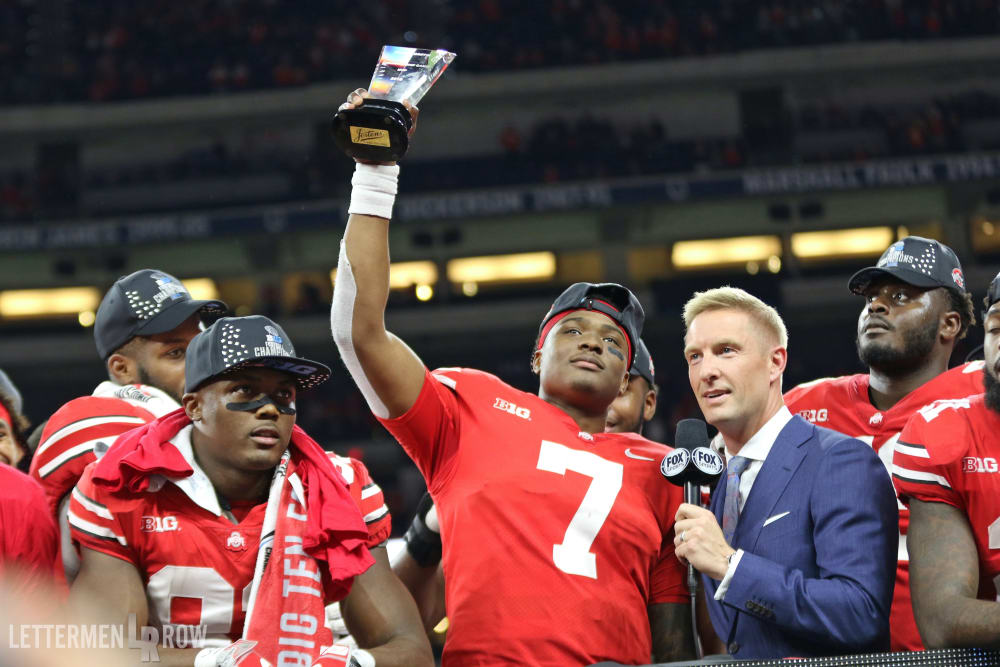 For the first time since 2006, Ohio State football has a Heisman Trophy finalist. It’s kind of unbelievable the Buckeyes have gone that long without a Heisman finalist while perpetually cranking out top-10 teams, especially when the likes of Northern Illinois, Boise State, Hawaii and Boston College have sent players to New York since Troy Smith won in 2006.

The Ohio State quarterback is a deserving finalist alongside Alabama quarterback Tua Tagavailoa and Oklahoma quarterback Kyler Murray. Haskins threw for 4,580 yards and 47 touchdowns this season, setting program records in both categories. He had huge games when it mattered most, including big-time outings against Michigan to close the regular season and Northwestern to win the Big Ten.

On Sunday, Ohio State coach Urban Meyer advocated for Haskins’ inclusion in the ceremony, which usually selects three to five finalists each year.

“He’s going one way or the other,” Meyer said. “I’ll fly him there myself. The way he plays and his stats against those other quarterbacks, he’s got to go to New York.”

Luckily, the Heisman committee saved Meyer the trouble of getting Haskins there himself.

How to watch the Heisman Trophy ceremony

The 2018 Heisman Memorial Trophy will be presented in New York City on Saturday, December 8

Watch online: The Heisman presentation can be streamed online via WatchESPN.

Heisman winner Troy Smith was in the Lettermen Row film lab this week again looking at how Haskins punched his ticket, breaking down another remarkable outing as the Buckeyes claimed the Big Ten title. Smith offers his advice to Haskins about how to enjoy the moment, raves about the arm strength — and maybe tips his hand about who finished on top of his ballot when it was submitted this week in his latest BuckIQ episode.

Ohio State has a key recruiting weekend on tap and will welcome in a host of major 2019 targets — most which are already committed to the Buckeyes — with the hopes of locking up some major areas of concern.

Jacoby, Young, Potter and Hickman are solid and locked in with their commitment to the Buckeyes, but the Ohio State coaching staff will have to work extra time to make sure that Nester gets the questions he has answered. The visits for Jacobs and Broeker are going to be important for the finish of the Buckeyes class. Committed to Iowa since May, Jestin Jacobs is an Ohio kid who Iowa sources believe will stick with the Hawkeyes but Ohio State is going to have one big swing to change his mind. Broeker says he’s 100-percent committed to Ole Miss — and arrives in Oxford for his official visit with the Rebels on Saturday — but he’s one of just a few offensive line options the Buckeyes are still considering.

For more recruiting news, check out Friday’s edition of Dotting the ‘Eyes.