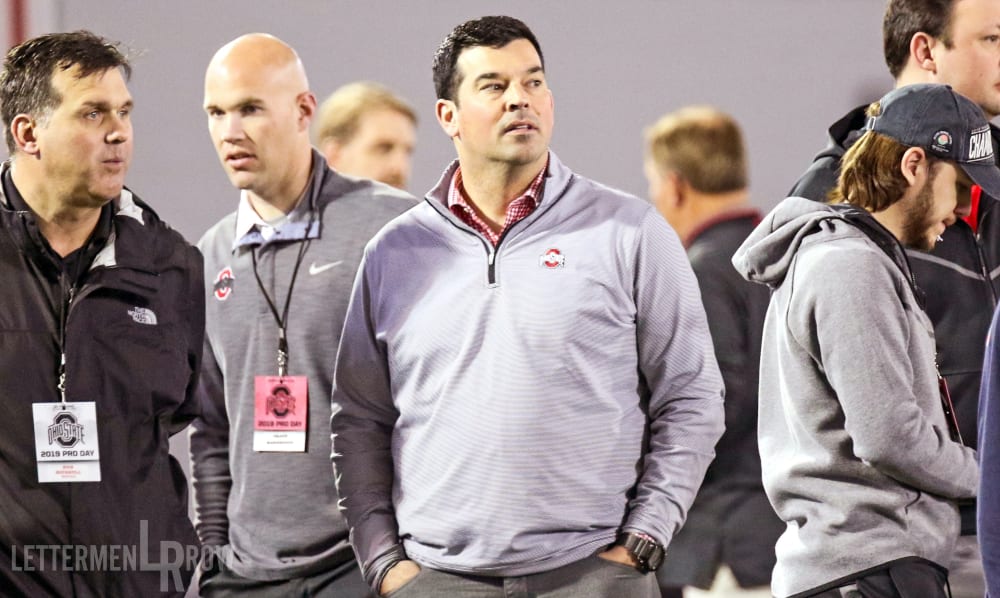 Ryan Day and the Buckeyes can be among the country's elite programs. (Birm/Lettermen Row)

Ryan Day is equipped to match Alabama and Clemson

Since winning the inaugural College Football Playoff National Championship in 2014, the Buckeyes have been looking up at Alabama and Clemson.  The Crimson Tide and Tigers have captured the last four titles between them and the Big Ten is 0-2 in the Playoff without scoring a point.

The proverbial gap seemed to widen when Urban Meyer announced his retirement in December, but senior writer Austin Ward says Buckeyes coach Ryan Day has the tools and resources to keep pace with Alabama and Clemson in the chase for titles.

“The Buckeyes had earned a reputation over the last few years for a serious, business-like approach. And while that overshadows at times the fact that Best Fridays in Football are laid-back, fun-loving afternoons or the value of what Ohio State is providing in terms of internships and academic opportunities, it was certainly part of the feedback on the recruiting trail. A number of players want that, of course, and that helped the Buckeyes land two of the most loaded classes of signees in school history.

But maybe a slight softening of that under Day, while maintaining all the rest of the proven structures already in place, can be a boost for the Buckeyes down the road as they try to keep pace with Clemson and Alabama.”

Ohio State can no doubt keep up with the two southern powers, the question is will they?

Though they hosted him on an official visit recently, The Buckeyes aren’t likely to get a commitment from 5-star linebacker Mekhail Sherman; he’s expected to commit to Georgia sometime in the near future.

But they are, however, in strong position with a number of other 5-star prospects. Current Ohio State commit Paris Johnson will continue to take visits elsewhere, but Ohio State is still the favorite. Running back Kendall Milton took a handful of visits to SEC schools, but the Buckeyes are still one of the favorites. Finally, 5-star Pennsylvania wide receiver Julian Fleming seems to be locked in on two schools: Ohio State and Clemson.

His recruitment is expected to heat up soon, according to Lettermen Row recruiting aficionado Birm.

“There’s no announced commitment date at this point for Fleming, and he’s expected to visit Georgia at the end of May. That trip could switch things up potentially, but the Buckeyes and the Tigers are the teams battling in this recruitment. I believe he picks Ohio State, whenever a choice is made, as I’ve been writing here since last November when I put in a “crystal ball” for Fleming to the Buckeyes.”

Ohio State needs to win those key recruiting battles if it wants to keep pace with Clemson and Alabama, as we’ve talked about.

Ohio State and Notre Dame should become familiar with each other in the coming months on the recruiting trail. The Buckeyes and Irish are right in the thick of battles for defensive backs Clark Phillips III and Lathan Ransom, center Reece Atteberry, tackle Michael Carmody — who the Irish just offered Sunday — and athlete Cameron Martinez.

Both programs have been to College Football Playoffs in recent past, and with some head-to-head recruiting wins, either one could find themselves in another.

The ball is really rolling downhill for Gill right now after leading the Buckeyes with seven catches for 95 yards in the exhibition in the Horseshoe a couple weeks ago. And while those scrimmages aren’t always the most useful tools to project the future, pretty much everything else the redshirt freshman had done in March and April suggested he was turning a corner and ready to contribute.

By no means is Gill a finished product quite yet. But Ohio State is starting to tap into his potential, and that could be significant for an offense trying to fill the void left behind when dynamic weapon Parris Campbell graduated.

This week on Lettermen Live presented by Byers Auto, former Ohio State linebacker Zach Boren joins Austin Ward and Jeremy Birmingham to discuss an array of topics surrounding Ohio State football. Among them were talks about Urban Meyer’s future and the Blue Jackets.