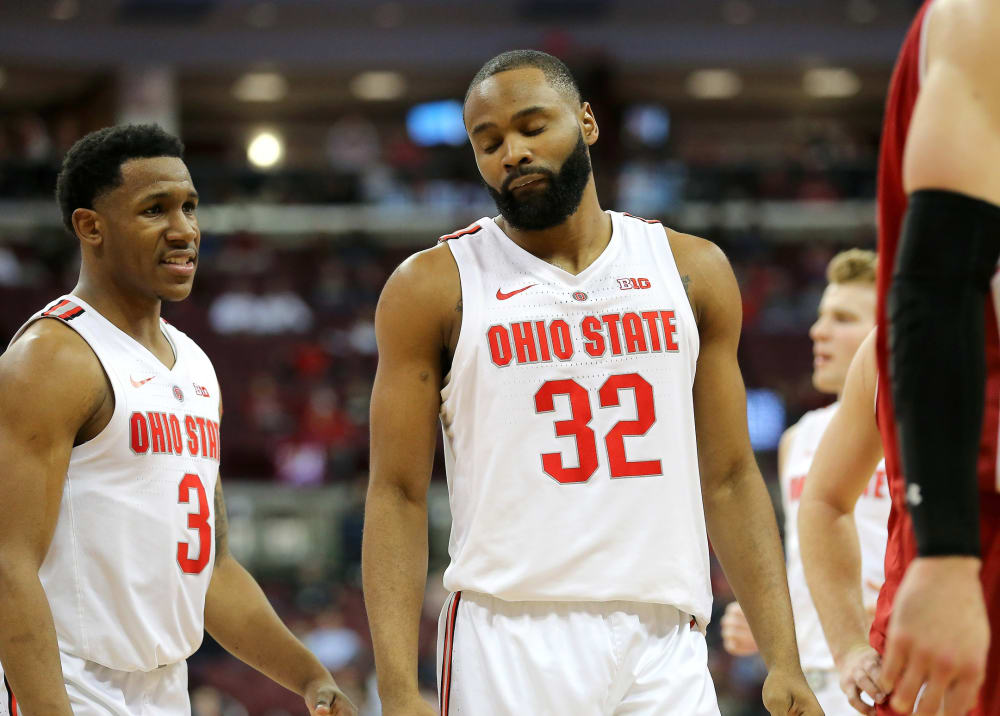 Ohio State avoided another embarrassment but fell just short of a season-saving win on Sunday. After trailing by as many as 23 points in the second half, Ohio State closed the game on a 17-1 run to force overtime against Wisconsin. The Buckeyes actually had a chance to win in regulation, but a game-winning shot attempt from C.J. Jackson was airballed and they fell 73-67 in overtime.

A win would have essentially locked up an NCAA Tournament spot for Ohio State, but instead it put the Buckeyes in very real danger of missing the Big Dance. Lettermen Row senior writer Austin Ward broke down the impact of the result in the latest Three Points post.

Ohio State opens the Big Ten tournament against Indiana in an 8-9 seed matchup on Thursday. That’s especially intriguing because when ESPN released its updated Bracketology after Sunday’s games, the Buckeyes were the last at-large team in the field of 68 and the Hoosiers were the first team out. It’s possible that bid thieves could do enough damage to require Ohio State to beat both Indiana and No. 1 seed Michigan State, but at the very least the Buckeyes will have to beat the Hoosiers to scrap their way into the field.

Will Ohio State have Kaleb Wesson back for the Big Ten tournament? Right now, that’s still unknown — at least publicly. After the Wisconsin game, Ohio State coach Chris Holtmann was asked about Wesson’s status and didn’t give any specifics. “We’ll give an answer on that moving forward when we can give one,” he said.

He did note afterwards that he’d likely have an answer by the time he next meets with the media, which should be either Tuesday or Wednesday.

Be sure to check out Birm’s story on how new Ohio State coach Ryan Day is making tweaks here and there to inject some of his own traits into the program.

As Birm writes, “It’s his program now. Yes, there will be a lot of reminders of Urban Meyer, especially when he’s there in person like when he was watching Day’s second practice from the sidelines on Friday. But every day, the Buckeyes will take on more and more of Day’s personality, even while he’s smartly avoided trying to reinvent the wheel at Ohio State.”

I’m sure there are some that will like this and some that won’t, but for my money he’s handling this really well. He got handed a ready-made program, which is why there won’t be wholesale changes. But if Day tries to be Urban Meyer instead of himself, it’s not going to work out as well. One of the best lessons I ever learned as a writer was to listen to mentors and writers I liked and take their advice but to also try to find my own voice instead of being someone else. Ryan Day isn’t Urban Meyer, and he doesn’t need to be to win at Ohio State.

Still, read the story for yourself, especially since it starts out with a great anecdote that would have made me do a double take if it happened while Urban was at Ohio State.

The conversation about 2021 quarterbacks has included J.J. McCarthy, Kyle McCord and Drake Maye, but to this point there hasn’t been much talk about Harbor City (Calif.) Narbonne 4-star prospect Jake Garcia. Offered by Ohio State on Jan. 29, Garcia may be the prospect furthest away from Ohio, but he’s got the attention of the coaching staff.

They’ve got his attention as well.

“I’ve had quite a bit of contact with them,” Garcia told Lettermen Row. “I have been able to get on the phone a couple times with my quarterbacks coach and the Ohio State staff. They say that they really like my film and feel like I am a very good fit for the offense and are excited to get me to Columbus. The relationship I have with Ohio State is already closer than most schools.”