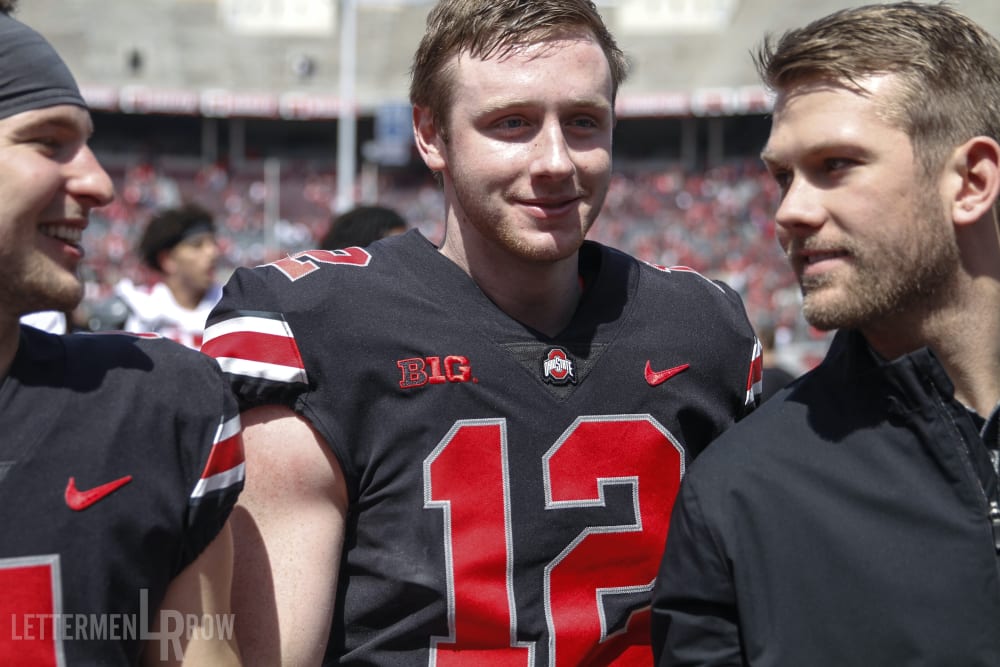 A busy offseason for Ohio State quarterbacks in the NCAA transfer portal still isn’t complete. Matthew Baldwin is the latest passer to enter his name in the database.

After just one season with the Buckeyes spent primarily recovering from knee surgery, Baldwin appears set to move on and find another place to tap into his strong-armed potential. Ohio State coach Ryan Day confirmed the transfer request on Thursday evening to Lettermen Row.

The departure of Baldwin officially clears the deck for Justin Fields to take control of the offense for Ohio State, but it also leaves the roster short on both depth and experience. Unless the Buckeyes can find a graduate transfer to backup Fields, the only other scholarship quarterback will be reserve Chris Chugunov who has just two career starts under his belt from his days West Virginia.

Baldwin said the matter was unrelated to the arrival of Fields or any problems he had with the program or its coaches.

“Spring was a tough time for me personally,” he said. “My family and I have prayed and talked a lot about where I belong and what is best for me. In the end, we feel it’d be better for me to step away from Ohio State. I want everyone to know this isn’t out of anger or frustration, but I’m not just a football player. While I’m so grateful for the experiences I have had here, it’s time for me to find a place that I feel is a perfect fit. I want to find a place to call home where I can thrive as a football player and student.”

In a statement Matthew Baldwin provided to Lettermen Row, and another made via his Twitter account, the redshirt freshman quarterback opened up about the difficult decision to leave the school he picked when he left Texas powerhouse Lake Travis High School.

“I want to start by saying I am grateful for my time in Columbus,” Baldwin wrote. “And the relationships formed here at Ohio State.

“This spring was huge for me. To finally get back on the field after my ACL tear. It felt really great being in the mix of things and taking snaps again. Being able to play in front of 75,000 of the greatest fans in the country was beyond exciting. I loved getting to know Justin and competing with him was an incredible experience for me. I was really proud of what I did and am excited about my progress.”

Where does Ohio State turn at QB?

Ohio State’s current options at quarterback are… limited. Aside from Justin Fields, the other two quarterbacks on the roster are Chris Chugunov and Danny Vanatsky. Would it be possible to bring in a graduate transfer? Lettermen Row recruiting czar Birm took a detailed look at the different paths Ohio State might be able to take:

Earlier on Thursday, Texas Tech’s Colt Garrett announced that he was leaving that program after graduating. He’d have two years to play and could be eligible immediately, providing some depth for Ohio State not just for this season, but 2020 as well.

Former USC quarterback Matt Fink is expected to graduate in June and would then be eligible immediately at a place like Ohio State and would still have two years ahead of him. Fink is a former 3-star quarterback prospect from Rancho Cucamonga, Calif., and turned down Boise State, Colorado and almost a dozen others when he picked the Trojans coming out of high school.

If you’re looking for a one-and-done option, an interesting conversation could be had with Penn State’s Tommy Stevens. He announced on Wednesday he was entering the transfer portal. After years of sitting behind Trace McSorley, the Indiana native could be looking for a place to start — which would seemingly rule out the Buckeyes. But Ohio State did give him a pretty serious look when he came out of Decatur Central High School in Indianapolis.

Paris Johnson has visited Georgia twice in the last six weeks and is scheduled to make an official visit this weekend as the Bulldogs bring in pretty much every big-name player imaginable for the spring game/recruiting bonanza.

Johnson was at Ohio State for its spring game last weekend, his second visit with the Buckeyes in two weeks. And according to a number of people who spoke with him and spent time with him, there remains a sense of guarded optimism that Johnson will ultimately stay home and play for the Buckeyes. But a recruit doesn’t make three trips to another school in six weeks unless there’s something really weird going on or he is seriously considering them as a college choice. Georgia is a top-tier national program with a very charismatic and successful offensive line coach Sam Pittman leading the way to try to flip him.

Beanie and The Boom podcast

Beanie Wells and Boom Herron are back this week to give their take on a busy week in sports in the latest Beanie and The Boom episode. The Ohio State spring game drew a huge crowd, so find out what the guys thought as the Buckeyes wrap up spring ball and head into summer workouts. They also discuss the Masters victory for Tiger Woods and a massive new contract for Russell Wilson.