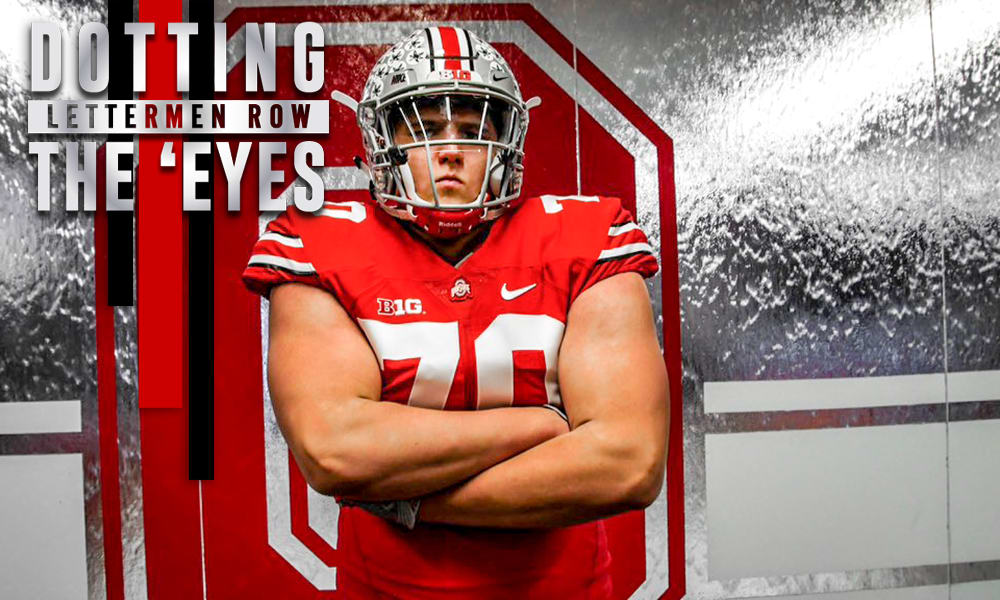 Stay in touch or be left out because Ohio State recruiting is a 24-hour, seven-day-per-week obsession. What’s the latest news as the Buckeyes build for the future? Get that and more Sunday through Thursday on Lettermen Row. Today’s update focuses on a trio of in-state targets, including a pair of 2021 prospects that have already been offered by Ohio State.

The Buckeyes have their first 2021 commitment thanks to Jack Sawyer, who committed on Sunday afternoon. Now they’re wasting no time trying to find him a regular sparring partner inside of Ohio’s borders. The state’s best defensive lineman needs to go up against the best offensive lineman, right?

That’s where 2021 standout Ben Christman comes in. He was offered by Ohio State earlier this week.

A 6-foot-6, 300-pound tackle from Richfield’s Revere High School, Christman has all the tools to be Ohio’s next big thing on the offensive line. He’s a kid that grew up dreaming of playing for the Buckeyes.

“Growing up I watched the Buckeyes all the time,” Christman told Lettermen Row. “I went on a visit there in December before the dead period.

“[Getting the offer] is big time, for sure. It was over the phone, with [running backs] Coach [Tony] Alford and Coach [Ryan] Day that offered me. I was pretty shocked. I was thinking it could be a little later in the year.”

The offer from the Buckeyes is sixth for the star lineman and his second from a team inside the Big Ten after Penn State offered in late January. The recruiting game is just getting started for a player who could end up being the state’s highest-ranked 2021 lineman, so he wasn’t considering a quick commitment — but is thrilled to hear what Ohio State is sharing with him.

“It feels surreal to be considered a top prospect by the Buckeyes,” he said. “They said nice things about my future and how excited they are to try and make me a Buckeye.

“They said I am one the top guys they’re going for. I’m just excited to receive this offer.”

Christman visited Ohio State in December, and he’ll be back in Columbus as soon as his schedule allows it.

“I will definitely be back in Columbus once basketball season is over,” he said.

Staying in the Class of 2021 and inside of Ohio, the Buckeyes are continuing their push for Pickerington Central’s Lorenzo Styles, Jr. The Buckeyes have offered and Brian Hartline has spent a lot of time in the last few months working to get to know Styles. Last weekend, he and his family visited Ohio State for junior day and once again felt at home on the same campus where his father played college football.

“It went good,” Styles said. “Visits like this are not as much hype as a game day, but it is more in-depth on the values the program, players and coaches have.”

Styles mentioned prior to his trip that he was hoping the visit would provide his parents with a better understanding of the current program.

“Most definitely,” he said. “My dad and Coach Hartline really hit it off in the film room. Plus, my mom and Coach Day’s values really seemed to align while we were having a discussion.”

Styles is close friends with Jack Sawyer and that commitment was something he definitely took note of. However, he’s not wanting to let the excitement he feels for his friend’s decision sway him into making one before he’s ready.

“Jack thinks it would be cool if I came and joined Buckeye Nation,” Styles said. “So do I, but I still need to find my best fit. Which could be Ohio State.

“I’m happy he found his spot, but for me, I feel like it’s too soon. I’m still growing up, and even when I make my decision I will be growing up. I just want to wait a little while longer before I make my commitment. This choice will be a big part of the rest of my life.”

Ohio State, Notre Dame and Michigan are the big three for Styles. He has 12 offers, including each of those schools.

Speaking of Ohioans, there’s still no news for Jaheim Thomas as he wants — and waits — for an Ohio State offer.

The state’s fourth-ranked 2020 prospect was in Columbus with his teammate Darrion Henry for the junior day last weekend. He had a great time and is staying patient with the recruiting process and the Buckeyes.

“I enjoyed it,” the 6-foot-4. 200-pound linebacker prospect said. “It was different [than previous visits].

“It was more laid back. I enjoyed it though. I feel like I get more love with this staff than the previous one.”

That could be because new linebackers coach Al Washington has had a relationship with Thomas for years dating back to his time at Cincinnati. Washington offered Thomas while he was coaching at Michigan and has a good bond with the Cincinnati Princeton 4-star.

“He said I have to be patient,” Thomas said. “Because there may only be one or two linebacker spots.”