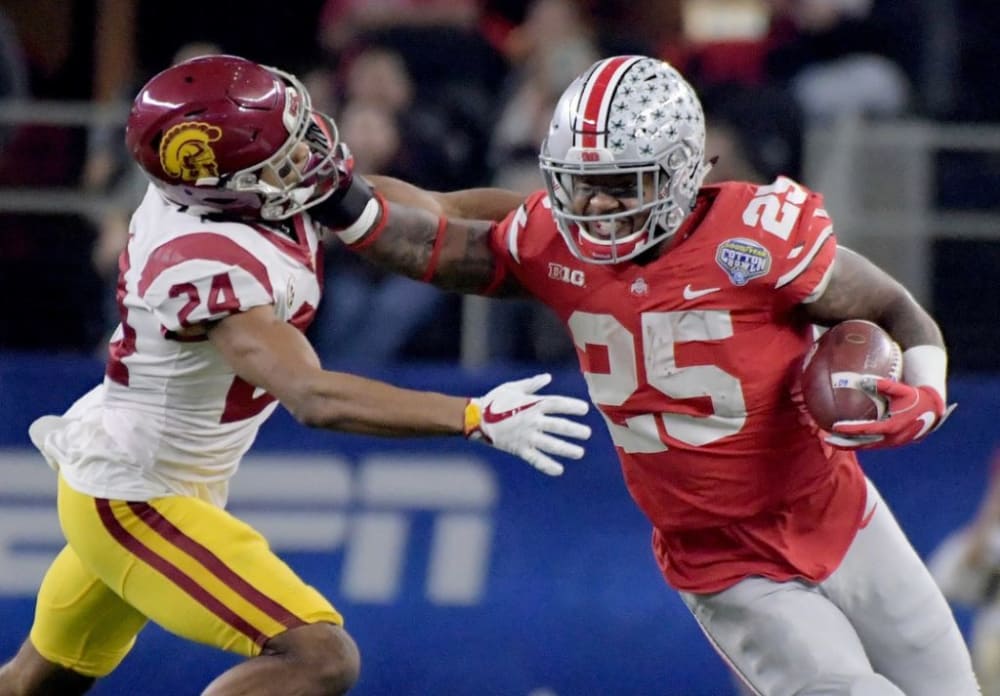 The speculation, debate and conversations about Ohio State never end, and Lettermen Row is always ready to dive into the discussions. All week long, senior writer Austin Ward will field topics on the Buckeyes submitted by readers and break down anything that’s on the minds of the Best Damn Fans in the Land, like today’s topic focusing on the Mike Weber and J.K. Dobbins. Have a question that needs to be tackled? Send it in right here — and check back daily for the answers.

Will Mike Webber rush for more yards than jk Dobbins this year.

The safe money is that J.K. Dobbins is only going to be better, stronger and in position to carry the football even more following his breakout freshman season at Ohio State. But might there be a sneaky play to be made backing Mike Weber instead in what could turn out to be a fascinating, friendly rivalry to lead the Buckeyes in rushing yardage?

Before making that case, let’s make it clear right up front that the prediction here is going to side with Dobbins. Now, with that out of the way, there are some reasons why rolling with Weber might not be as crazy as it sounds.

First, it’s important to take the redshirt junior’s health into account. Weber was clearly a different player at the end of last year when he was finally back near full strength from the serious hamstring problem that nearly required season-ending surgery in training camp. And now that he’s had a full spring and offseason to get his body right and continue that momentum, Ohio State isn’t going to be shy about using him in a loaded backfield. If the carries start to truly even out and the playing field is balanced, Weber and his home-run ability can’t be ruled out of the competition.

The throttling of Michigan State last November is the perfect example of what the Buckeyes can do when they’re rotating those elite rushers — and Weber’s explosiveness helped him edge Dobbins in terms of yardage in that game, which he did again the next week against Illinois. Dobbins wound up doing the heaviest lifting again in The Game and the pair of postseason victories, including his MVP-winning performance in the Big Ten title matchup against Wisconsin that included 179 yards of offense. And while Dobbins still is the clear favorite to lead in carries this year and averaged a full yard more per attempt last season overall, Weber might be able to close some of the gap if Ohio State isn’t leaning as much on the quarterback to fuel the rushing attack.

There are always other factors that will come into play, whether it’s injury problems like Weber’s last year that helped prove by paving the way for Dobbins in the first place or blowouts cutting down on the workload for the nominal starter. One way or another, they’re both going to get a lot of work. They are each proven commodities at this point, and Ohio State’s depth at that position borders on ridiculous when Weber is at his best.

Dobbins is the smarter bet as the favorite, but Weber shouldn’t just be dismissed in that battle. Odds Mike Weber can take the rushing crown for Ohio State this year: Let’s say 20 percent.