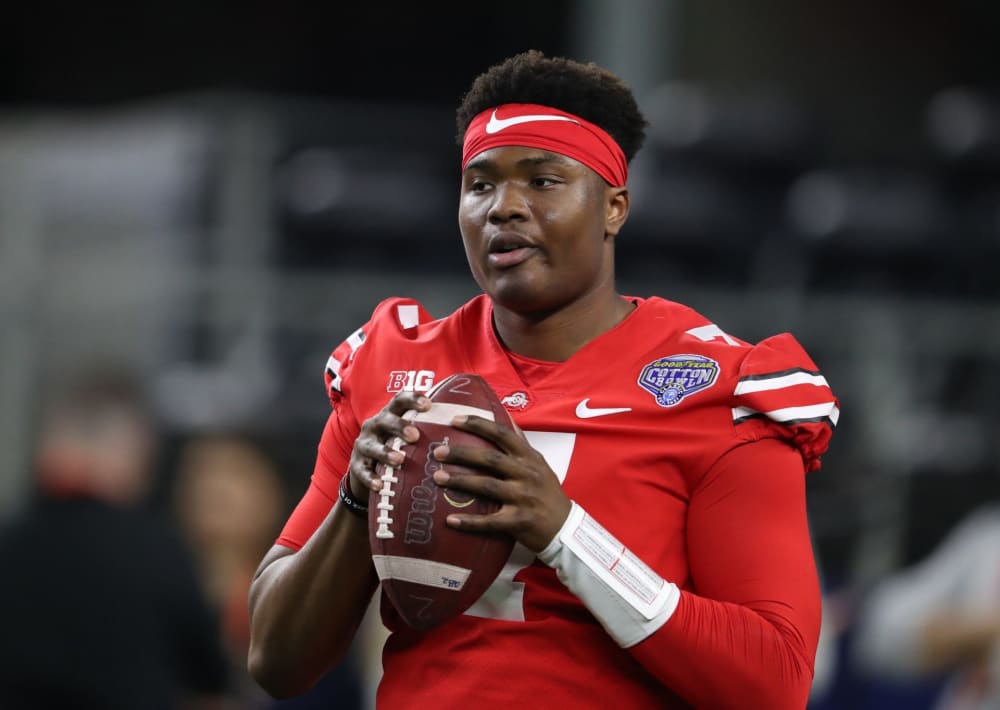 Expectations are already soaring for Dwayne Haskins as he takes over at quarterback for Ohio State. (Matthew Emmons/USA TODAY Sports)

Any chance we do not land a QB this year and take 2 next year. I know not ideal but feels like our QB choices are dropping left and right. Also, what is the panic level if haskins is one and done?

The possibility exists that the Dwayne Haskins Era could be a short one, especially if the combination of the redshirt sophomore’s impressive skills and the Ohio State playbook allow him to put up huge numbers right away as a starter. In all likelihood, Haskins would still receive some feedback that he should return to school for more experience and a second year leading the Buckeyes, and the safe bet is that he will. But how much panic would there be if he left after this season?

Whether it’s through transfer or skipping to the NFL, no program ever wants to lose a talented quarterback. Those guys are simply prized commodities, so it will always sting — and potentially more so for Ohio State after just losing Joe Burrow to LSU after his productive spring camp. The thinning of the depth chart has already lowered the margin for error for the program at the most important position on the field, so a departure by Haskins would absolutely not be ideal. Having Tate Martell waiting in the wings would ease the blow, no question about that. And there are plenty of reasons to be excited about the potential Matthew Baldwin brings to the Buckeyes after they plucked him out of Texas in the most recent signing class.

Dwayne Haskins has already made a mark with Ohio State off the bench. (Rick Osentoski/USA TODAY Sports)

But that’s it for scholarship depth at quarterback right now, which means one way or another Urban Meyer is going to need to find somebody who can throw the football in the Class of 2019. There is no crystal ball here, and with the wild way things have played out on the recruiting trail so far, it might even be foolish to hazard a guess as to who the Buckeyes eventually wind up landing. But it’s clear that it can’t afford to sit this cycle out, thanks in large part to the potential that Haskins could be gone next year. Whether it’s something of a long shot at this point or not, Ohio State can’t take that chance.

The Buckeyes are already going to lose a lot of talent in the passing attack as the veterans in Zone 6 move on, and sometimes that factors into the decision-making process for a quarterback. But Ohio State has done a nice job already of restocking the pipeline, and with what should be a rock-solid offensive line and another season working with J.K. Dobbins in the backfield, Haskins could again be leading a national-title contender while working to boost his professional stock.

Maybe he won’t need to after breaking out this year. Maybe he’ll already have a championship ring on his finger. Ohio State obviously wouldn’t complain about that — but that would only make it more important to be planning for that future right now.