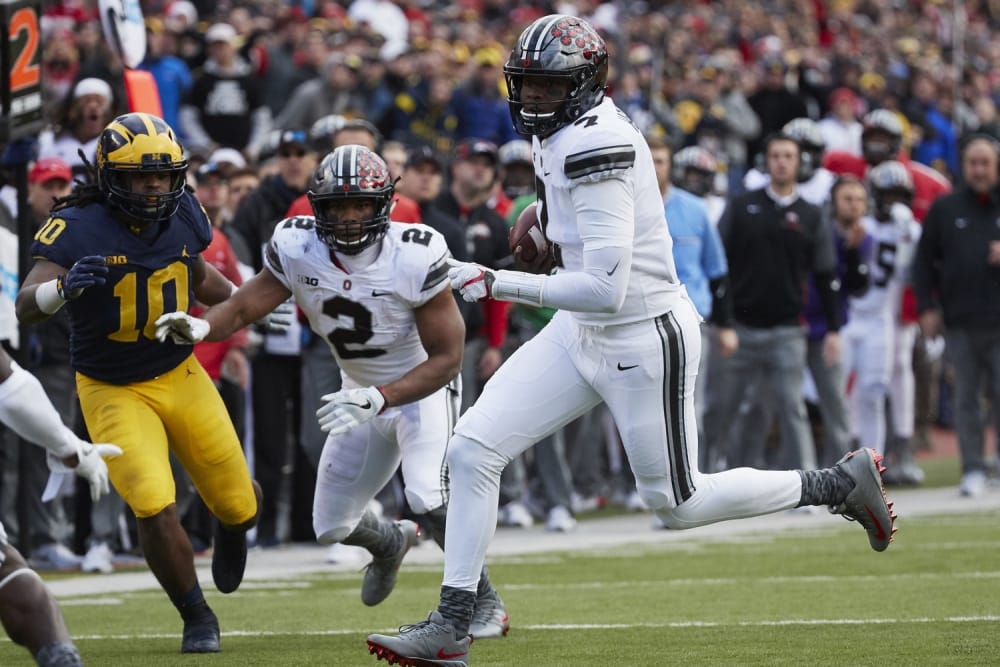 Dwayne Haskins proved he could use his feet in the comeback win for Ohio State over Michigan. (Rick Osentoski/USA TODAY Sports)

The speculation, debate and conversations about Ohio State never end, and Lettermen Row is always ready to dive into the discussions. All week long, senior writer Austin Ward will field topics on the Buckeyes submitted by readers and break down anything that’s on the minds of the Best Damn Fans in the Land. Have a question that needs to be tackled, like today’s on Dwayne Haskins? Send it in right here — and check back daily for the answers.

Couple parts to it: How often do you expect this new Buckeye team to call designed runs for the QB? How often should they? Should they bring in Tate for said designed QB runs?

The expectation in a post-J.T. Barrett world at Ohio State is that quarterback rushing attempts will be scaled back, and there are several good reasons to do so. Dwayne Haskins doesn’t bring quite the same level of mobility as his predecessor, the passing attack appears poised to click into a much higher gear — and there are a pair of elite tailbacks who should primarily be the focus of the ground game. But the Buckeyes won’t be getting rid of that section of the playbook entirely, and it’s even possible that they won’t actually cut back all that much.

The easiest comparison for the skills that Haskins brings to the position is obvious. Powerfully built with a rocket for a right arm and the ability to use his feet if needed, Ohio State has the latest version of Cardale Jones on its hands. So, what happened when the Buckeyes plugged him into the lineup during that postseason run? Jones wound up with 46 carries over those three prolific games, including 21 attempts in the national championship victory over Oregon. 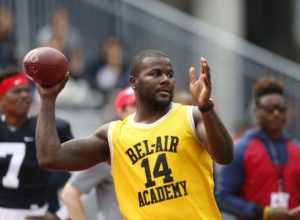 Jones proved effective as a scrambler, he could still operate the zone-read system and he was deadly as a short-yardage weapon. Even with Ezekiel Elliott in the backfield, Ohio State still found success by continuing to include the quarterback as a weapon on the ground — with the threat of the deep ball helping both of them by keeping defenses off balance.

If the Buckeyes are able to keep opponents from stacking the box with a more diverse passing attack and Haskins throwing to the entire field, it might not even matter how many designed quarterback runs are called as a complement. Ohio State is going to rack up points and yardage with anybody carrying the football.

Will they be more explosive with J.K. Dobbins and Mike Weber shouldering the load? Absolutely, but Jones offers one blueprint that shows they don’t have to do it alone. And much of the play calling, as always, will depend on how teams try to defend the Buckeyes, which makes it hard to nail down a precise number of attempts that they might or should target with Haskins.

The redshirt sophomore only has a limited sample size to work with at this point, of course. And he only ran the football three times after coming off the bench in the second half of the comeback win last November in The Game. But one was a key scramble that extended a drive and set up a touchdown, offering clear evidence that his legs can be plenty useful for Ohio State without it needing to turn to Tate Martell to keep the quarterback run alive.

Maybe there are people who want it to die, particularly after seeing some games where Ohio State leaned more heavily on Barrett than perhaps it should have. But for Urban Meyer’s power-spread attack, having his quarterback involved is always going to be part of the formula. Will he tweak the exact recipe with Haskins and that terrific tandem of tailbacks? Probably so, but it definitely won’t be disappearing completely.

Miss the last Question of the Day about Haskins and his NFL future? Catch up right here.