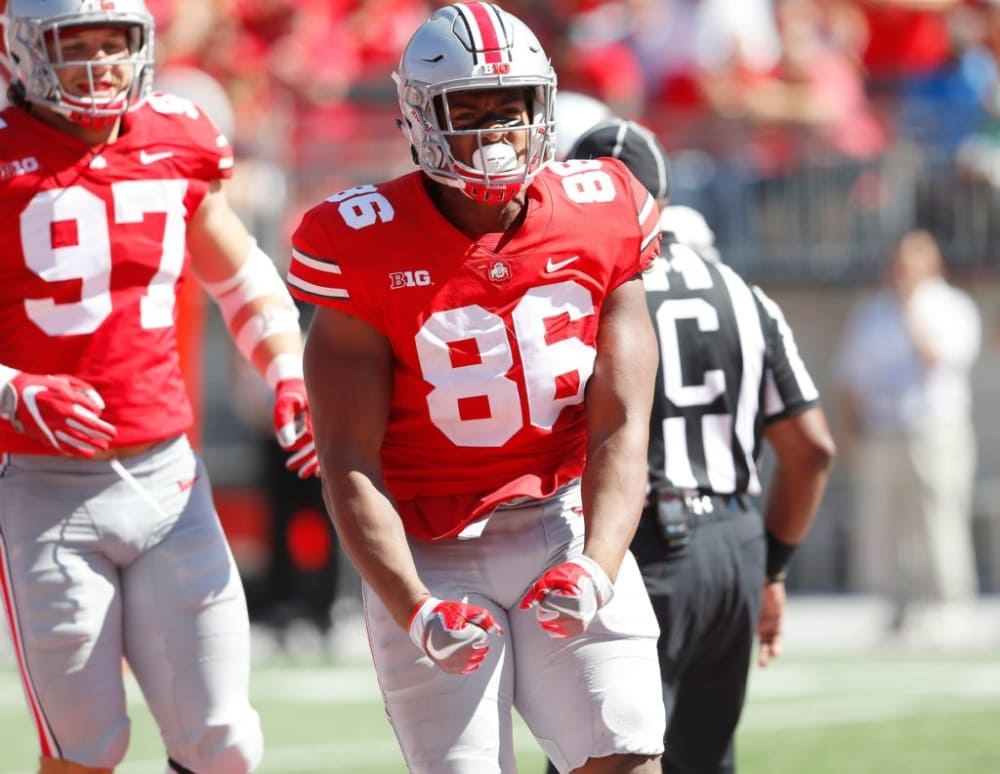 Dre'Mont Jones will be looking to set the tone on the Ohio State defensive line. (Joseph Maiorana/USA TODAY Sports)

What do you think coaches think is the more important battles on the lines defense and offense? The naming of starters or the battle for the backups proving we have depth? Just because I know coaches prefer to rotate players. Or maybe that's just defensive line.

Whether there is proven, NFL-level talent returning or a completely untested batch of linemen, and no matter which side of the football, Ohio State is always going to have the laser focus in the trenches during training camp. For all of the talk about Urban Meyer’s innovation with the offensive playbook throughout his career, he’s always built his most successful teams by dominating with powerful blockers and elite defenders who can beat them going the other direction. Obviously, nothing will be any different when these Buckeyes get to work now in a few short weeks.

As for the main objective? That actually might be different this time around for those two units, even if ultimately the result would be establishing and building depth by the time the opener rolls around against Oregon State on Sept. 1. 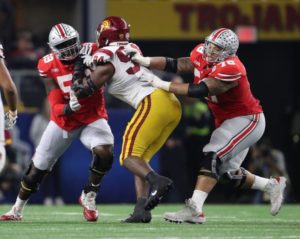 Isaiah Prince and Demetrius Knox team up for a block in the Cotton Bowl win for Ohio State. (Matthew Emmons/USA TODAY Sports)

So to address that topic for the offensive line: With a bit of uncertainty facing at least two starting jobs, the top priority will be figuring out who should anchor the unit at center and who will hold down the right guard spot. The vacancy in the middle is arguably the most pressing issue facing Ohio State in August, and while both Brady Taylor and Josh Myers are capable of handling that immense responsibility, that’s a spot where an answer will be needed sooner rather than later. That’s not really the case at guard, because it’s at least possible to think the Buckeyes would be open to something of a rotation with Branden Bowen, Demetrius Knox, Malcolm Pridgeon and perhaps Wyatt Davis all vying for action on the interior. A byproduct of that competition will likely be the deepest group of offensive linemen during Meyer’s tenure with the program, but the starting jobs must come first.

On the defensive side, Ohio State has a much better handle on what the first wave is going to look like. Nick Bosa, Chase Young and Jonathon Cooper can keep the Rushmen rolling at defensive end, and Dre’Mont Jones and Robert Landers are both poised for productive seasons on the inside. From there, the Buckeyes will get to focus on what they might get from newcomers like Tommy Togiai, Antwuan Jackson and Taron Vincent to add to the mix at tackle, while Jashon Cornell fights to make it a four-man rotation on the edge. The benefit for the defensive line this year is that it shouldn’t have to devote as many reps to identifying the starters, which could speed up the learning curve for the young guys.

Either way, both lines are going to be watched closely at Ohio State when camp opens. And how the Buckeyes spend that month will wind up being critical to where they finish the season.