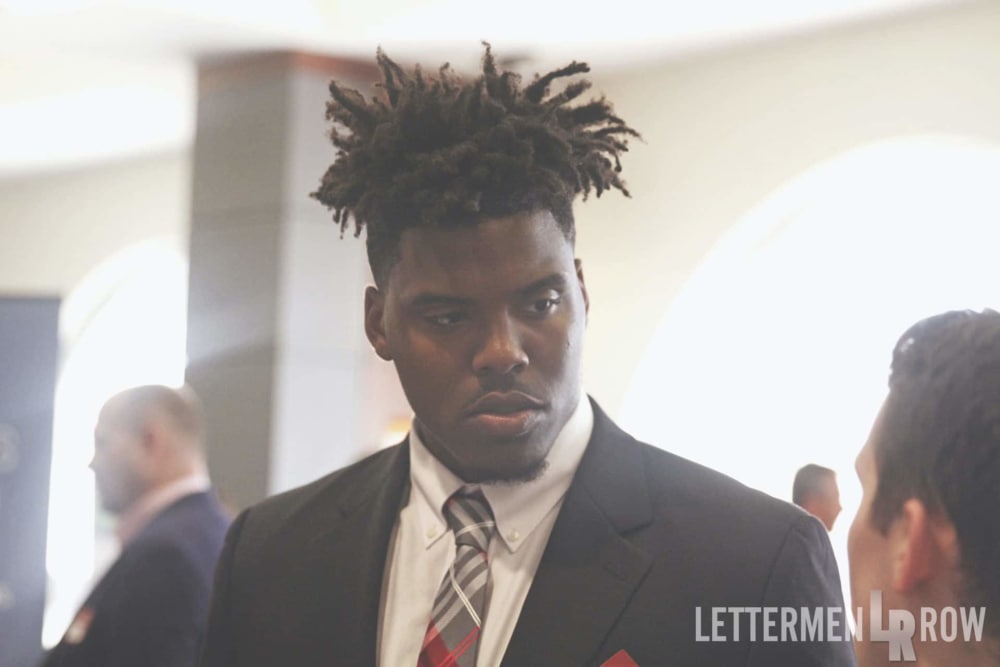 Tyreke Smith will be fighting for playing time right away at Ohio State. (Birm/Lettermen Row)

Odds that the freshmen DEs (smith/friday/jean-baptiste) redshirt given the (warranted) hype for bosa, young, and cooper? Seems like the play would be to maximize nfl talent before they leave/build depth at the position by banking an extra year of eligibility for younger guys

There might not be a position coach at Ohio State more excited about the NCAA rule change when it comes to redshirt seasons than Larry Johnson. The Buckeyes are loaded with future professionals at defensive end, and they get to shape the rotation and lean as heavily on Nick Bosa, Chase Young and Jonathon Cooper as they want to this year. At the same time, Ohio State can also get some experience for the newcomers while still reserving the right to officially preserve their freshmen status for another year ahead of some upcoming roster turnover.

Without question, this is the best of both worlds for Johnson and coaches all over the country. It’s also a huge benefit for players, which made this tweak to the redshirt system an absolute no-brainer. (Kudos to the NCAA for not finding a way to mess it up!)

The Buckeyes may discover during training camp or within that four-game window that Tyreke Smith is physically ready and too talented to keep on the shelf this season. In which case, for a team that likes to keep snap totals low for the starters in order to keep fresh bodies on the field, the need to play Smith now would outweigh the value of redshirt that might not keep him in the program after three years anyway.

The same goes for another 4-star prospect in Tyler Friday, who showed up on campus with a 6-foot-3, 262-pound frame that may already be up to the grind in the Big Ten trenches. But if he’s not ready, or if Javontae Jean-Baptiste needs more time to develop after initially projecting as a linebacker by the recruiting services, then Ohio State can find that out on the field without risking anything. That’s critical, because the Buckeyes have to manage the future of the roster while simultaneously squeezing all it can out of the limited time it has left with Bosa along with the expectation that Young will be gone after the 2019 season.

If Ohio State can afford it, the ideal scenario probably includes two of those three getting experience but keeping the extra year of eligibility in reserve. Based solely on the evaluations come out of high school, Smith would be the odds-on favorite to make an impact right away after checking in at No. 34 nationally in the 247 composite rankings. But those ratings don’t guarantee anything once training camp starts, of course, and Ohio State definitely won’t be making any decisions about playing time based on them now.

The good news for Johnson and the Buckeyes? Thanks to the new rules, they also don’t need to rush to one after training camp, either.