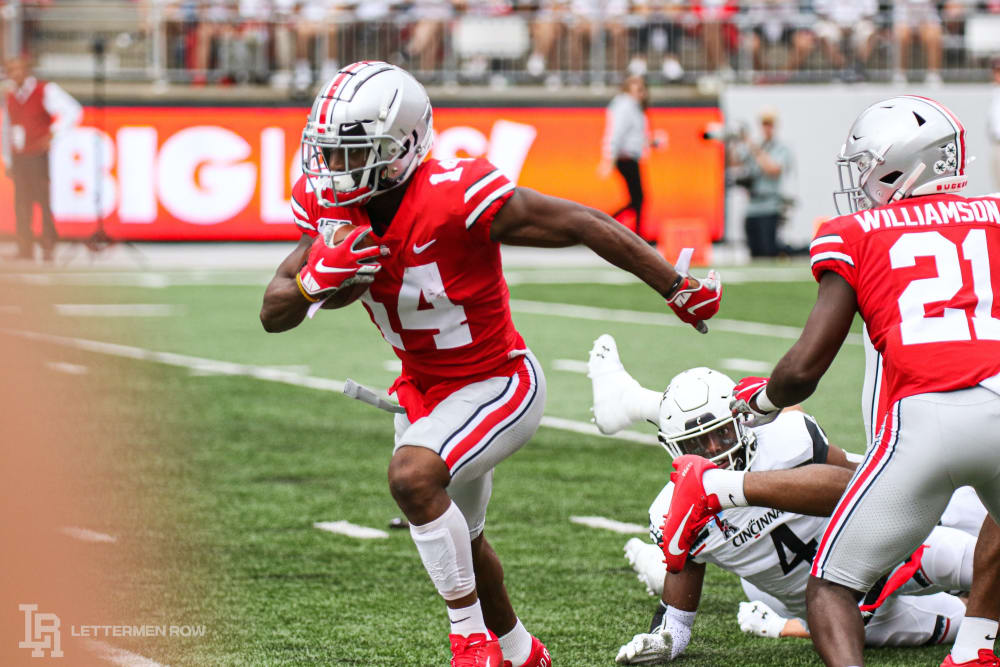 K.J. Hill and Ohio State will find out how they handle a road trip this weekend at Indiana. (Birm/Lettermen Row)

The speculation, debate and conversations about Ohio State never end, and Lettermen Row is always ready to dive into the discussions. All week long, Lettermen Row will field topics about the Buckeyes submitted by readers and break down anything that’s on the minds of the Best Damn Fans in the Land. Have a question that needs to be tackled, like the one today about the Ohio State’s possible trap games? Send it in right here — and check back daily for the answers.

Biggest trap game on the schedule?

Don’t expect Ohio State to sleepwalk into Bloomington on Saturday.

Since the last two seasons have featured one-game collapses from the Buckeyes — Iowa two years ago and Purdue last season — it seems like everyone is trying to point to certain road games as the trap game for the Buckeyes.

As Ohio State prepares to hit the road for the first time this season, players and coaches have been asked all week how to avoid the let-down game in conference play that’s ultimately kept the Buckeyes out of the College Football Playoff. But those two games from the past are in the rearview mirror for this season’s Ohio State team.

Those games were both in October or early November. In 2017, the Buckeyes had just beaten Penn State in an emotional comeback victory, then had to travel to Iowa. Last year, they reeled off seven straight wins to open the season before falling at Purdue.

“Things didn’t go right in both of those games,” Ohio State senior wide receiver K.J. Hill said. “I just feel like we have to go out and play football. We went in there prepared. We went in there feeling great about the game. Stuff just didn’t work out. We just take it one game at a time, study the opponent and go out there and perform and execute.

“It’s really unexplainable, because we prepare the same each week. I feel like it’s just more on the execution side of it. We have to execute our plays, and of course, if you don’t, you’re going to end up with an L.”

But this road trip, the Big Ten opener, comes after Ohio State blowout wins over Florida Atlantic and Cincinnati. There’s no excuse for a let-down game, certainly not after just two games against Group of Five opponents.

“We want to be the best in the country, and the message to the team is that the issues are still on the film,” Ohio State coach Ryan Day said. “Whether you win, you lose, the immature player or the immature coach looks at it and says everything’s good. We won, and we won pretty handily, but the facts of the matter are that the issues are on film. As the level of play increases through conference play and as the season goes on, those issues aren’t going to go away.”

Ohio State is almost always more talented than any opponent it plays. So, it comes down to talent and execution, even against Florida Atlantic and Cincinnati. Day doesn’t seem to think the Buckeyes are satisfied with the way they played, even in securing a shutout against Cincinnati last week. So if there’s a trap game on the schedule, it’s not likely to be Week Three at Indiana.

After a week of practice and interviews, the Buckeyes are aware of the questions that stem from the setbacks from the last two campaigns. And they appear determined to not let it happen again. Not at Indiana.

How Indiana has become key recruiting pipeline for Buckeyes
J.K. Dobbins recapturing magic ahead of return to site of splashy debut