Connect with us
Ohio State defensive end Zach Harrison has major potential for the Buckeyes.

COLUMBUS — The physical upside of Zach Harrison has always been immediately apparent.

But that didn’t necessarily make him a can’t-miss, surefire superstar to everybody at Ohio State, at least not during his initial recruitment.

Yes, Harrison was blessed with freakish athleticism. Watching him run track was a sight to behold considering his size. And he certainly wasn’t pegged as a five-star defensive end by accident.

But strength coach Mickey Marotti wasn’t completely sold on Harrison during his first meetings with him and struggled to get a read on his personality, work ethic and desire to be great. But that quickly changed once Harrison arrived on campus, proving in a hurry that he had all the mental tools to go with his rare natural ability.

“When he was recruited, I was like: ‘What are we doing?’” Marotti said earlier this offseason. “He was so quiet, he didn’t want to talk, he wouldn’t look you in your eye — so awkward. I’m like, there’s no way. I don’t care if he runs a 21.2-second time in the 200 with no cleats on. What are we doing? 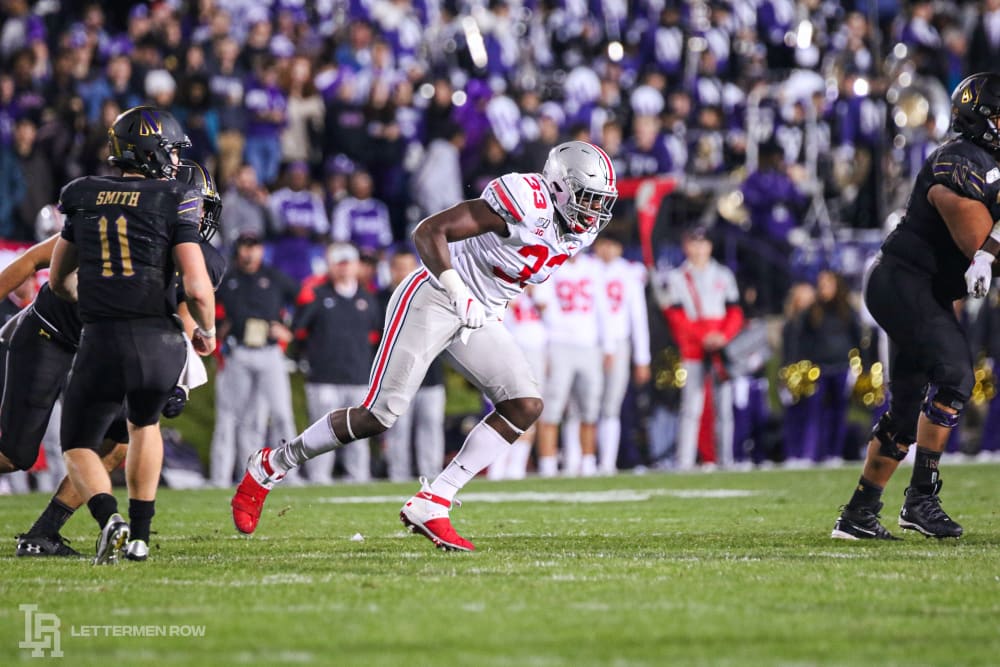 Harrison started building on the foundation during an impressive freshman campaign for the Buckeyes last year, one that was perhaps more productive than Marotti or the coaching staff would have imagined even after he started coming out of his shell. Considering all of the depth Ohio State has accumulated with the Rushmen, it certainly came as a surprise to see Harrison start two games — including the Fiesta Bowl — and finish with 24 tackles, 5 tackles for loss and 3.5 sacks

Heading into Year Two, Harrison appears to only be scratching the surface. And he looks to be on track to take the torch as the next great pass-rushing threat at Ohio State.

What makes Zach Harrison a potential superstar? How much better can the Ohio State defensive end get in his second year with the program? When does a pass-rusher really start feeling comfortable with the Buckeyes? Former Ohio State star and current Bengals defensive lineman Sam Hubbard joined Lettermen Row to break down some film and answer those questions in the latest episode of BuckIQ.

Any updates on what he weights now

Sam is a class act. LetsGoBigMoe. Class of ’69’. I had Brain Surgery in Oct. and I had 3 strokes after. I moved to Kentucky a few years back, and I am now getting Meals on Wheels. I know what its like to get help in times of need. I am regaining my trust in people. LETS GO, Crusaders, Buckeyes and Bengals. The Bengals were in a lot games last year. It should be better this year, Lets Go Joe B.

some very useful info here, and an obvious, basic recruiting principle we evidently keep having to learning and using over and over again.

…sadly, i cannot think of anything that “has always been immediately apparent” to me.

Second, i am limited in willingness, ability, and senses in my perceptions of everything ‘now’ – at this moment. I am simply not ‘everywhere’ at once to see what is in the ‘now.

Third, i am ashamed to admit what is not ‘apparent’ to me now, misses far more than what is apparent to me now. I don’t want to describe this, except to say i feel like the old TV show Get Smart, where our SuperAgent often misses things by ‘that much’….

But…i ‘feel so good about myself’… inas